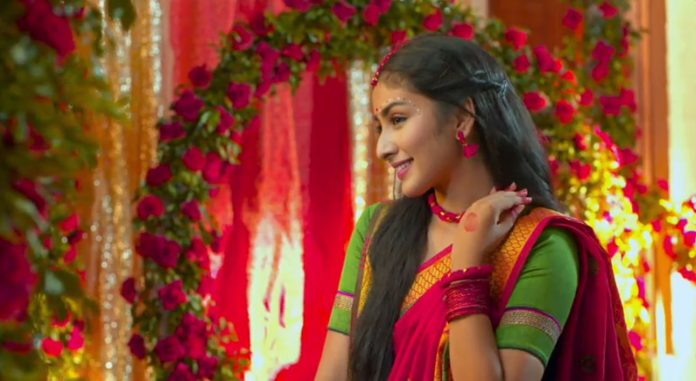 Barrister Babu 6th September 2021 Written Update Bondita’s fate Sampoorna opposes Trilochan when he tries to get Shashwati married at a tender age. She can’t believe that Trilochan is supporting child marriage and doing this injustice when Anirudh opposed child marriage and gave up his marriage for ending the bad custom. She tells that Anirudh would have burnt the mandap if he was here. Trilochan wants Anirudh to come back on hearing about the shocking marriage. He tells Sampoorna that he doesn’t think child marriage is a bad custom, when Anirudh left them forever, then he will not follow any of Anirudh’s principles.

Anirudh goes to shop the sindoor, while Bondita awaits him in the mandap. Anirudh wants to marry Bondita and fill her hairline with the sindoor. A shocking news awaits Anirudh. Bihari meets Anirudh in the market. He asks Anirudh to come with him to the haveli as soon as possible to save Shashwati.

Anirudh enquires about Shashwati. Bihari gives him the shocking news that Trilochan is forcibly getting Shashwati married to someone, by keeping Sampoorna captive. Anirudh can’t believe that Trilochan can fall to this level just to summon him home. He realizes Trilochan’s attempt to stop Bondita and his marriage. What will happen with Bondita when her groom doesn’t reach the mandap? Will Anirudh be able to fulfill his love vow? Keep reading for further updates on this show.

Anirudh buys sindoor for Bondita. He loves Bondita a lot. He dreams of his marriage with Bondita. He just wants to become of Bondita. Bihari disturbs him and breaks his dream. Anirudh sees him and tries to run away. Bihari stops him. He tells that Trilochan didn’t come along, Sampoorna told him about Anirudh’s address and sent him to take help. He asks Anirudh to come home and save Shashwati from a child marriage, Trilochan’s madness has reached the peak. Anirudh drops the sindoor in shock.

Sampoorna cries that she had to tell the address to Trilochan and become selfish to save her daughter. Trilochan asks Somnath to lock up Sampoorna. He had sent Bihari to Anirudh, to call Anirudh home. He knows that Anirudh loves Bondita a lot, but his fight against the bad customs is still on. He tells that Anirudh loves his principles more than Bondita, he will surely come to stop Shashwati’s child marriage. Anirudh tells Bihari that he will stop Shashwati’s marriage.

Trilochan is damn sure that Anirudh will leave Bondita in the mandap and come to them. Kali and Bondita await Anirudh in the mandap. Someone informs that Anirudh had run away, he won’t be marrying. Bondita shockingly runs from the mandap to find Anirudh. She finds Anirudh leaving. Chandrachur reaches Bondita to shoulder her when she faints down in trauma. Chandrachur plans to marry Bondita. Trilochan and Somnath carry the inhumane act and try to get Shashwati married. Anirudh comes home to stop the marriage.

He angrily destructs the mandap. He saves Shashwati. Sampoorna gets glad that Anirudh has come. Anirudh asks Shashwati to go to her room. Bondita is shocked on getting conscious and seeing Chandrachur there. Chandrachur asks Bondita why is she running away, when Anirudh left her for his family again. Bondita trusts Anirudh. Chandrachur tells her that Anirudh was just trying to take revenge on her by leaving her in the mandap. Bondita doesn’t fall in his words. He attempts to break his faith on Anirudh.

Anirudh tells Trilochan that Shashwati’s marriage won’t take place. He throws out the groom and his family. He regrets on Trilochan’s thinking. Kali asks Bondita not to lose faith on love, love wins after crossing difficulties. She tells Bondita that she has to keep her love strong if its true. Chandrachur jokes on Bondita’s ill fated love. Anirudh lectures Trilochan for ruining Shashwati’s life by planning her child marriage. He asks Trilochan if he doesn’t love Shashwati.

Trilochan lectures him for running away with Bondita to secretly marry her. He tells that the enmity between both the villagers got more tense because of his love story. He reminds Anirudh how he broke his marriage and always projected himself right. He tells that he had decided everything all by himself always. He asks Anirudh to be dutiful towards his people, since he took the responsibility himself. He asks Anirudh not to leave his family to someone’s revenge. He calls Anirudh selfish.

He further threatens him against making child marriage a common thing in the marriage if he chooses his love Bondita. Sampoorna reveals Trilochan’s plotting to Anirudh. Anirudh wants to marry Bondita, but Trilochan chains his steps by his worst threatening. Anirudh decides to choose his responsibility to fight against the bad custom, instead his love for Bondita. Stay tuned.

Reviewed Rating for Barrister Babu 6th September 2021 Written Update Bondita’s fate: 2/5 This rating is solely based on the opinion of the writer. You may post your own take on the show in the comment section below.