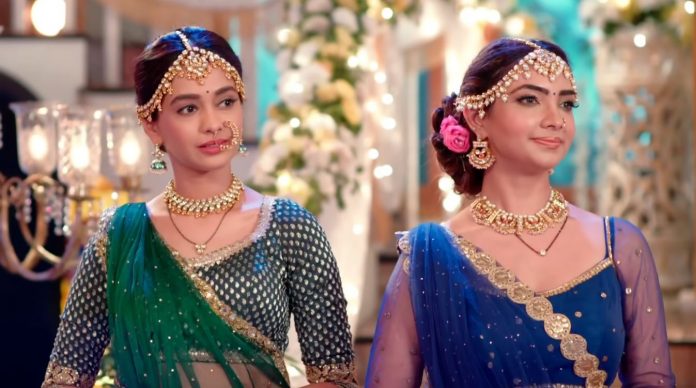 Kumkum Bhagya 6th September 2021 Written Update New Trouble Pallavi declares that she will give her bangles to one of her two bahus, whoever performs the best in the Janmashtami function. She declares the competition between Rhea and Prachi. Rhea and Prachi dance and perform on the Kanha song in the Janmashtami function. Prachi gets close to win the competition. Rhea angrily breaks her bangles and drops on the floor. She makes Prachi stop dancing by her plans. She sees Prachi stepping on the broken bangles and getting her feet hurt.

Prachi doesn’t stop dancing. She continues to dance and finishes off by proving that she is the best. Rhea gets angered seeing Prachi’s confidence. Prachi and Rhea’s personal competition goes on from Rhea’s side. Prachi thinks Rhea has accepted her heartily and can’t do anything against her. Rhea has evil intentions and plans to turn the entire family against Prachi. Prachi wins the competition, but falls in Pallavi’s sight.

Pallavi asks Prachi why did she dance even when she got herself hurt. She tells Prachi that she didn’t do this right, she had tried to humiliated her. She tells that Prachi has shown everyone that she is tortured by her mum-in-law.

Prachi tells that she didn’t think so. Pallavi tells that Prachi proved that her Saas had burdened her with the puja responsibility. She takes it in a negative way. Pallavi rebukes Prachi for proving her wrong. She asks Prachi why is she acting so great. She tells that she permitted Prachi to dance, not to do any such drama. Rhea gets glad seeing Prachi scolded by Pallavi. Comment your views on the show. Keep reading for a detailed update.

Sumit asks Abhi how did he marry Pragya, she is really very rich. Abhi’s friend tells him that he is also ready to get on sale if he can get a rich household. He tells that Tanu can find a rich client for him also. Amit asks Abhi how did Pragya accept him, if she knows him from before. Abhi tells that maybe she knew him, but he got to know her now. Pragya meets Abhi’s friends from the chawl. They tell that they have come to play carrom with Abhi. Pragya doesn’t disturb them. Amit tells Abhi that Pragya is Abhi’s queen.

Sumit tells that he knew that Abhi is in love with Pragya. Abhi asks his friends to come for drinks. He takes them to the bar and shows the collection. Sumit asks Abhi if they can drink from the wide variety. Abhi asks them to drink as much as they want. The helper gets the snacks for Abhi and his friends. Abhi tells that Pragya has no objection with his drinking, Pragya asks him to drink, she is completely the opposite of Tanu.

Abhi drinks with his friends. Pragya finds Abhi enjoying with his friends. Abhi’s friends like the costly collection and drink a lot. Abhi gives them a treat. He regrets that his wife Tanu sold him. He tells that he doesn’t know if he should be happy or angry. He tells them that he is really confused, that his wife bought him, Pragya is his wife whom he loved a lot. His friends ask him if Pragya is his wife and his love. Abhi tells that its not a story, he always loved Pragya.

Amit asks Abhi why didn’t Pragya identify him in the chawl if she knew him already. Abhi tells that he is saying the truth. Sumit asks him to toss a coin and decide the truth. Abhi tosses the coin. On the other hand, Prachi leaves from the kitchen, which makes Rhea spoil the bhog food. Rhea adds garlic in the bhog deliberately to get Prachi blamed for the blunder. Siddharth meets Rhea and finds her lying. He wants to know what is Rhea upto. Dida and Pallavi introduce the family’s new members to the guests.

Ranbir tells that Prachi is going to perform. He wants to watch her performance. Pallavi asks Ranbir and Siddharth to call their wives. Vikram finds happiness in the house after a long time. The guests praise Prachi and Rhea for being so beautiful just like Radha. Rhea tells that Radha is just one. She thinks she is Ranbir’s Radha. Dida tells that they both are Radha’s avatar. Rhea feels love for Ranbir. She announces that she will give her rare diamonds bangles to her bahu who wins the dance round. Ranbir wishes all the best to Prachi and Rhea. Rhea wants to win the bangles and also Ranbir’s heart.

Rhea does wrong steps and worries that she will lose. She wants Prachi to dance wrong and lose in the competition. Rhea drops her broken bangles on the floor. She hurts Prachi in her madness to win. Pallavi gets worried seeing Prachi dancing over Rhea’s broken bangles. She stops Prachi from dancing. Prachi doesn’t realize the pain. Ranbir and Dida get worried for Prachi’s wounded feet. Stay tuned for next.

Reviewed Rating for Kumkum Bhagya 6th September 2021 Written Update New Trouble: 3/5 This rating is solely based on the opinion of the writer. You may post your own take on the show in the comment section below.