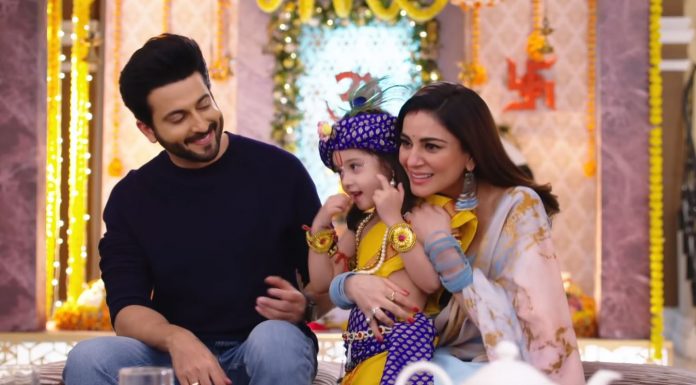 She asks Pihu to go to her parents. Pihu accepts Karan and Preeta as her parents, adding to the family’s happiness. Rakhi, Kareena and Bani wish Preeta all the very best for the new phase of her life, motherhood. Karan and Preeta get blessed for becoming parents through adoption. Sherlyn can’t stand their happiness. Will Sherlyn harm Pihu and prove Preeta a careless mother to stop the adoption? Keep reading.

Also read Meet:
Both the families decide the marriage date by speaking to the pandit. The mahurat is after 15 days. The groom’s family wants the marriage to happen on the date given by their Guru ji. Meet wants to talk to them and postpone the date.

Her Dadi stops her from calling the groom’s family. They find it really tough to arrange the marriage expenses amounting to 15 lakhs in a short period of 15 days. Dadi asks Meet to fulfill a guy’s responsibility now, she has to arrange the money and get Manushri married. Meet takes Dadi’s challenge. She takes up the responsibility of Manushri’s marriage. Keep reading for a full update coming soon.

Pihu plays with a ball. She goes to Mahesh’s room to ask him to pass the ball. Mahesh teases her by taking the ball. He feels unwell. He asks her who is she. She holds him. He thanks her for saving him. He tells that he is okay thanks to her. She asks the way to go downstairs to everyone. Mahesh takes her. The family gets happy seeing Pihu bringing Mahesh out of his room. Rakhi tells that Krishna has come home in the form of Pihu. Karan and Preeta sign the papers and start the adoption process.

The lady tells that they are really lucky to get a lovely girl in their lives. Rakhi tells that adoption is a good process, many such parents and families need a child, and many children need families. The lady praises the emotional bonding in the Luthra family. Mahesh learns about the adoption. He gets surprised that Karan and Preeta will be becoming Pihu’s parents. He is delighted that Karan and Preeta finally achieved their happiness.

Pihu tells that Karan and Preeta are her friends. The lady asks them to give some time to Pihu, she will soon accept them as parents. Rakhi tells Mahesh that she told him about the girl before. Mahesh gets emotional when Pihu calls him Dada. Pihu meets the entire family. Sarla and Shrishti aren’t aware of the happenings in Luthra house. Sarla tells her that she wants to pray for Preeta.

She tells that she will pray for Shrishti as well. She gets Sameer’s call. Shrishti wonders why didn’t he call her. Rakhi and Sameer want to give the good news to Sarla. Sameer tells that its a big news. Sarla asks Rakhi what’s the matter. Rakhi tells that she has to give her a good news. She first tells her that Preeta’s test reports have come, reports aren’t in favor of Preeta, there are many complications in Preeta’s case, their hearts broke and Mahesh fell sick once again.

She tells that Kareena suggested of adoption, Karan and Preeta agreed to adopt a child, and today they got a lovely daughter in their lives. She tells them that they adopted a sweet little girl, she is really cute who won their hearts. She tells about Pihu. Sarla and Shrishti get happy with the good news. Rakhi tells that they should celebrate their new promotions in their relations. Rakhi asks them to come home and meet Pihu. Shrishti wants to meet Pihu. Sarla tells that they will be coming soon. She didn’t expect to receive such a good news on Janmashtami.

Karan and Preeta get happy spending time with Pihu. Pihu asks Rakhi to dance on Janmashtami eve. Rakhi asks Karan and Preeta to get ready for the puja. Sherlyn can’t stand their happiness. Prithvi feels wrong has happened with Sherlyn. She tells that she was happy knowing Preeta isn’t pregnant, but still the family is mad for Preeta. He tells that they thought Preeta can never get set in a rich family, but she got set so well that she had left Sherlyn upset. Sherlyn asks him not to taunt or fight.

She feels time is really going worse. She thinks to befriend Preeta. This makes Prithvi laugh. She tells that Preeta’s fate is really good, she got a baby on Janmashtami, Karan and Preeta didn’t distant because of Sonakshi. She tells that she wants Preeta dead. Prithvi hides Sherlyn from Kritika. Kritika asks him to wear the Janmashtami outfit and come downstairs. She tells him that he should meet Pihu.

The family gets into celebrations mood because of Pihu. Prithvi finds everyone happy and waiting for Pihu. He thinks Pihu gave them a new reason to smile. Sherlyn gets angry seeing Kritika romancing Prithvi. Sarla and Shrishti arrive home to meet Pihu. They get joyed up seeing the bundle of cuteness, Pihu. Sarla gets emotional. She tells that she is her Nani. She feeds the butter to Pihu. Sarla and Shrishti make a bond with Pihu. Keep reading.

Reviewed Rating for Kundali Bhagya 6th September 2021 Written Update Big surprise: 3/5 This rating is solely based on the opinion of the writer. You may post your own take on the show in the comment section below.