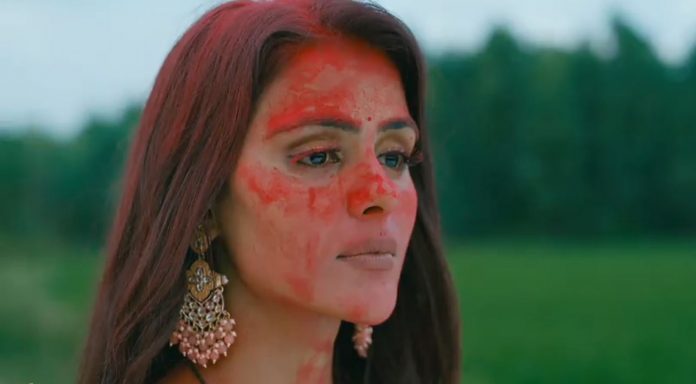 Udaariyaan 7th September 2021 Written Update Tejo’s Sindoor Tejo rebukes Fateh for cheating her for a girl like Jasmin, who isn’t lying to her own sister and family. She knows very well that Fateh will one day realize his grave mistake and cry a million tears, but it will be late till then. She tells Fateh that Jasmin is really selfish, she always thinks of herself first, she has no true feelings for anyone. Tejo spares their lives, much to Jasmin’s relief. Fateh sees pain in Tejo’s eyes, while Jasmin just thinks of herself.

She tells Fateh that Tejo should deal with the emotional conflict herself, they shouldn’t go to explain anything to Tejo, she will not understand them. She justifies that she is worried for Fateh’s life as well. She feels scared that Tejo could have shot Fateh and her to death. She misunderstands Tejo, who really has a big heart to spare them after a big deceive. Tejo goes away from their lives. She lets Fateh and Jasmin unite the way they want. Fateh grows restless.

He tells Jasmin that he didn’t wish to break Tejo’s heart in this manner, it would be better if they left without hurting her. He doesn’t think Tejo is wrong, seeing her reaction that was so true and painful. Jasmin sounds selfish again. She tells that Tejo came in between and its her mistake that she is bearing this pain. She claims to love Fateh more than anyone else, more than Tejo as well. She tells Fateh that Tejo’s love for him isn’t true.

She fills his ears against Tejo’s love. Fateh doesn’t understand how will he handle Tejo if she goes to his home and informs his family about his relationship with Jasmin. He gets terrified that Tejo’s revelation will shock both the families, who would never accept Jasmin and his relation. Tejo shows a big heart and decides to divorce Fateh. She asks Fateh to marry the one he loves, even though she knows Fateh is at a bigger loss by choosing Jasmin. Fateh will soon learn Jasmin’s huge lies and realize his mistake.

Fateh and Jasmin realize that Tejo didn’t come to their respective homes. Jasmin was expecting a big drama in her house with Tejo’s entry, but informs Fateh that Tejo didn’t come home. Fateh tells that he thought Tejo will go her home, but don’t know where did she go. Jasmin also wants to find out Tejo. Tejo goes far from them. Fateh gets worried for Tejo. He looks for Tejo everywhere. Fateh’s family enquires about Tejo. Tejo’s family also arrives at his house to know about Tejo. Fateh tells them that he doesn’t know where is Tejo, he is searching for her since night. He tells that Tejo has gone missing. Both the families grow worried for Tejo. When will Fateh see Jasmin’s real truth? Where did Tejo depart? Keep reading.

Fateh and Jasmin return home thinking of Tejo’s emotional outburst. Jasmin finds her parents at the door to confront, and wonders if Tejo told them the truth. They question her about her lies. Jasmin tells them that she will take some rest and then come for a talk. The family is happy in Virk house. They want to bring Ganpati home and celebrate the festive with Tejo. Fateh doesn’t see Tejo at home. He wonders if Tejo went to her house and told the truth to her family.

Rupy and Satti confront Jasmin for burning his passport and lying to Gippy. They realize that Swaroop was right about Jasmin, who had cheated them badly. Jasmin tells them that she didn’t wish to marry Gippy, she disliked him. Satti questions her about her intentions. Jasmin tells them that her truth won’t matter to them, they will always find Tejo right. Jasmin asks them if Tejo didn’t come home. Satti replies that Tejo didn’t come home. Jasmin thinks why didn’t Tejo tell them anything.

Fateh has no answer when his family ask for Tejo. Jasmin lies to Satti about Tejo. She leaves her family angered. Rupy calls Tejo to know the matter. Khushbeer asks Fateh and Amrik to go and get the Ganpati idol home. Rupy wants to know what is Jasmin planning. The Virk family brings Ganpati home. They wait for Tejo home. Fateh learns from Jasmin that Tejo didn’t come to her house. He wonders where did Tejo go. She tells him that Tejo didn’t tell anything to the family.

Fateh tells that Tejo didn’t come to his house as well. They both get worried thinking of Tejo. She tells that maybe Tejo had gone to Buzo’s house to tell how they wronged her. Fateh leaves to meet Buzo to find out Tejo. Fateh learns that Buzo is partying with his friends. He leaves from there and looks for Tejo in the entire village all the night. Fateh informs Jasmin that Tejo isn’t anywhere in the village. Jasmin asks him not to worry, Tejo would be ashamed to meet his eyes, knowing he doesn’t love her.

She asks him not to worry for Tejo, he shouldn’t fall weak, she will come home to create a scene about them. He asks her to think of Tejo once, her life might be in danger. He makes a prayer to Ganpati to find Tejo. He feels guilty. He doesn’t want Tejo to get punished for his mistake. He still regards Tejo a good friend. The Virk family celebrates Ganpati festive. They welcome Rupy home and ask about Tejo. Rupy tells them that he has come to meet Tejo. The family is shocked knowing Tejo wasn’t at her parents’ house.

Rupy asks them to call Tejo. Gurpreet tells them that Fateh told them that Tejo went to her Maayka. Rupy grows worried knowing she is missing. Khushbeer calls Fateh. Fateh is asked about Tejo. They want to know where did Tejo go. Mahi tells them that Fateh and Tejo’s terms had got spoilt since some days. Fateh tells them that he doesn’t know about Tejo, he is finding her since night, she isn’t anywhere. He assures that he will find Tejo. Khushbeer asks Rupy not to worry, he won’t let anything happen to Tejo.

Fateh grows much worried for Tejo. Jasmin meets Fateh and finds him madly in tension. She asks him not to worry for Tejo. He reminds her that Tejo is her sister, who always loved her. He asks her to find Tejo and worry for her, she can’t be so selfish. She questions him about his love. Fateh asks her to understand, that few things are important than love in life. He wants to file a missing complaint at the police station. She alerts him that their visa can get cancelled, they will be trapped.

Fateh yells at her selfishness. She calms him down. She tells that they will soon know about Tejo. Jasmin rushes home to see Bebe who suddenly fell sick. She gets angered that Tejo went missing to get everyone’s attention. She arrives home to receive a shock. She finds Tejo with her family. Jasmin understands that she will surely be confronted now.

Kajal stays stressed, while Arjun performs on the stage with his sister-in-laws. Arjun’s Bhabhi confronts Kajal for meeting Arjun at the temple ti discount the dowry. Kajal sternly confronts her for speaking ill about Arjun. They both blame each other. Kajal reminds her the limits to be observed in relations. Kajal’s dad is being rushed to the hospital. He speaks of Kajal’s Sangeet. He doesn’t want Kajal to know his pain.

He decides to not trouble her further. Kajal asks Arjun not to tell their every secret to his family. Arjun lies to her. Kajal awaits her dad’s arrival. Kajal’s dad realizes that the guy who rescued him is actually a doctor. Anurag tells him that its actually his own hospital where he got him admitted. Kajal has no idea about her dad’s troubles. Kajal calls him again. He informs her about his accident. She rushes to the hospital to meet her dad. Anurag tells her that her dad needs a doctor, not a daughter at this time.

He makes her leave from the ward. Kajal meets Anurag to know about her dad’s reports. Anurag tells Kajal that her dad’s reports aren’t good. He suggests a medical procedure to cure his illness. Kajal asks him if his condition is serious. Anurag tells that he can cure him if the patient and his family aren’t resisting for tests. He doesn’t promise her any miracle.

Reviewed Rating for Udaariyaan 7th September 2021 Written Update Tejo departs: 3/5 This rating is solely based on the opinion of the writer. You may post your own take on the show in the comment section below.