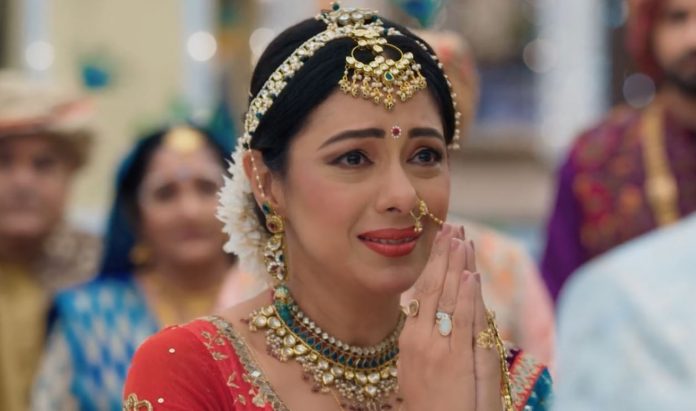 Anupama 7th September 2021 Written Update Kanha entry Kavya keeps upsetting Vanraj by telling him about Anupama and Anuj’s old bonding. Samar is hurt knowing about Rohan and Nandini’s bond. The couples get dressed as Radha and Krishna. Everyone in the Shah house look very beautiful in the costumes and jewellery arranged by Kinjal. Nandini waits for Samar. Samar speaks to Anupama. She asks him to return home on the day of festive. Samar doesn’t want to talk to Nandini. He feels things will never get fine. Anupama asks Samar not to lose hope.

She finds her son crying. Anuj takes GK to the temple. He sees Samar walking on the road with tears in his eyes. He finds Samar in danger. He also worries for Samar’s safety. He runs to save Samar from the accident by risking his life. Anupama hears the sound of his accident on the phone call. Anupama and entire family get upset. Vanraj asks Anupama what had happened to Samar. Anupama tells about the accident. She wants to go and find Samar.

anraj asks Anupama to come to senses. He tells that nothing will happen to Samar. They receive a call from Samar’s number. Anupama asks for Samar. GK speaks to her. He asks her to send the address, he is bringing her son home. Vanraj asks Anupama to keep patience and wait. Leela and Kavya get into a heated argument. Kavya defends Nandini. Leela blames Nandini for being responsible for Samar’s accident. Anupama and Vanraj anxiously wait for Samar. She tells that it will really be someone angelic who saved Samar. Samar gets conscious.

He recalls how Anuj had saved him. Samar asks Anuj what did he inform at home. Anuj tells that he is going to drop him home. He gives a piece of advice to Samar. He learns about Samar. Samar tells that he already knows about Anuj. Anuj asks him to learn to live with sorrow. He speaks of deep love. He asks Samar to just think of his family and never risk his life next time. Samar tells about his mother. Anuj tells that his mum can’t be more beautiful than his/Anuj’s mum. They have a bet. Anuj brings Samar home. Anupama hugs Samar and emotionally cries. She is relieved that he is okay. She asks Samar not to have this madness next time.

Anupama is thankful to the person who brought Samar home. Anuj meets Anupama. Its an unexpected meet for both of them. Samar tells Anupama that Anuj risked his life to save him. Anupama pays her gratitude to Anuj for returning her son. The family thanks Anuj. Kavya asks Anupama to invite Anuj home for Janmashtami. She gets cheap minded to ask Anupama to make such yummy food that Anuj comes home often to have it. She asks Anupama to befriend Anuj to get his help. Anupama disregards her cheap ideas. Anuj fills the empty place of Kanha in Anupama’s life. Anupama and Anuj become a pair as Radha-Krishna. Anupama and Anuj perform in the Janmashtami function, much to Vanraj’s shock.

Reviewed Rating for Anupama 7th September 2021 Written Update Kanha entry: 3/5 This rating is solely based on the opinion of the writer. You may post your own take on the show in the comment section below.