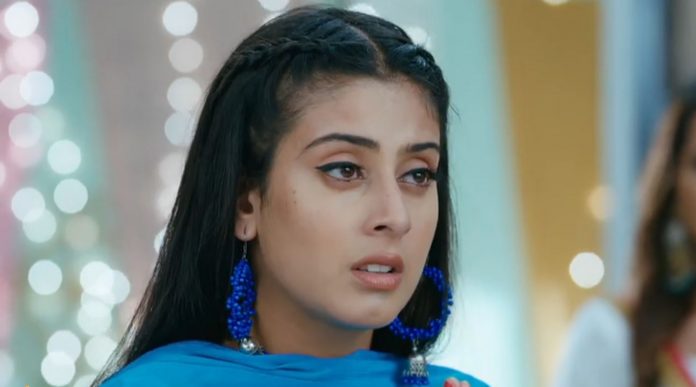 Udaariyaan 10th September 2021 Written Update Jasmin to die Khushbeer ousts Fateh and Jasmin from his house. He believes that Ganpati has brought Fateh’s truth out and opened their eyes. He is too hurt that Tejo wasn’t valued by Fateh. He respects Tejo, who always gave her hundred percent to the family. He tells Jasmin that the family will never become of her, the family just belongs to Tejo. He gets more sure of his decision to make Tejo his bahu, who is too sincere. He doesn’t think Fateh and Jasmin deserve any forgiveness.

Gurpreet turns selfish for her son. She stops Fateh from leaving the room. She tells that Fateh will not go anywhere leaving his house and family. She sympathizes with her son. She asks Jasmin to leave the house, since its only her mistake. Jasmin is thrown out of the Virk house, while Fateh cries for her. Gurpreet doesn’t let Fateh go after Jasmin. She stops him from leaving the family for a girl like Jasmin, who couldn’t be loyal to her own sister and family. Jasmin leaves alone, crying and shattered after facing the dire consequences.

She didn’t know she will see such a day when Fateh’s family will burst their anger at her, and stop Fateh from reaching her. Jasmin is all lonely and sobbing. Rupy calls her to reprimand her for ruining her own sister’s marriage. He curses her for being worse than a witch, who at least spares her own house.

He tells Jasmin that she is the worst thing that happened to them. He asks Jasmin to not come home, since she is dead for the family. Jasmin doesn’t have any place to go. She sobbingly walks on the road in sorrow, only to see a speeding truck towards her. Jasmin gets in front of the truck. Jasmin meets with an accident when the truck hits her and leaves her injured. Will Jasmin die for real when she is dead for everyone? Is this accident her plan to win back everyone’s sympathy? Will the accident soften everyone’s hearts for Jasmin again? When will Fateh learn Simran and Buzo’s truth, and realize Tejo’s innocence? Keep reading for more.

Fateh tells Gupreet that Tejo has been wronged, but still she isn’t alone, she has her entire family to support her, while Jasmin is all alone, suffering. He worries that Jasmin can do something wrong, she can take any extreme step and put her life in risk after her own family abandons her. He asks Gurpreet to let him go to Jasmin. Gurpreet threatens to die, if he goes. He still shows his madness for Jasmin and goes away. He tells Gurpreet that he has to be with Jasmin and support her, he can’t see his love shattering.

Khushbeer gets more raged and asks Fateh to leave the house for his mad love. Fateh doesn’t listen to Gurpreet and makes a leave in search of Jasmin, who was thrown out from his house. On the other hand, Tejo weeps in sorrow. Rupy and Satti try hard to console her and keep her fine. This big deceive is worse and bigger than the deceive given by the fraud guy Jaz. Tejo can’t believe that Fateh and Jasmin together cheated her. She breaks Fateh’s picture in anger and throws all his memories away.

She has made up her mind to remove him from her life. She removes the Suhaagan bangles and signifying ornaments, since she doesn’t remain Fateh’s wife now. Tejo cries a lot in his memory, but holds herself strong thinking of his cheat. Fateh madly searches for Jasmin on the roads, who is all alone sobbing. Jasmin gets abandoned by her family when Rupy ends ties with her. Rupy sees Tejo broken down, and asks Jasmin to never show her face at their door. He tells that Jasmin is dead for them. Jasmin loses her calm consciousness. Fateh looks for Jasmin to protect her from any upcoming dangers.

Fateh leaves his entire family in sorrow. Khushbeer imagines the sorrow and pain Tejo is going through by Fateh and Jasmin’s deceive. Tejo shatters on her relation’s death. Jasmin meets with an accident, and gets an entry back in the Virk house.

Jasmin regrets Rupy and Khushbeer’s words. She doesn’t see the truck coming towards her. She stays lost in herself. Rupy asks Tejo to never forgive Jasmin for snatching her rights, since she has done a big crime this time. Jasmin meets with an accident, while Fateh reaches the same place to find her injured. Jasmin gets spotted by him. He gets worried for Jasmin’s life and rushes her to the hospital. Fateh gets Jasmin treated. Rupy and Satti learn that Khushbeer has come home to meet Tejo. They try to keep Tejo away from the mess. Fateh brings Jasmin home, going against the family. The tensions in Virk house get higher with Jasmin’s entry.

Reviewed Rating for Udaariyaan 10th September 2021 Written Update Jasmin to die: 5/5 This rating is solely based on the opinion of the writer. You may post your own take on the show in the comment section below.