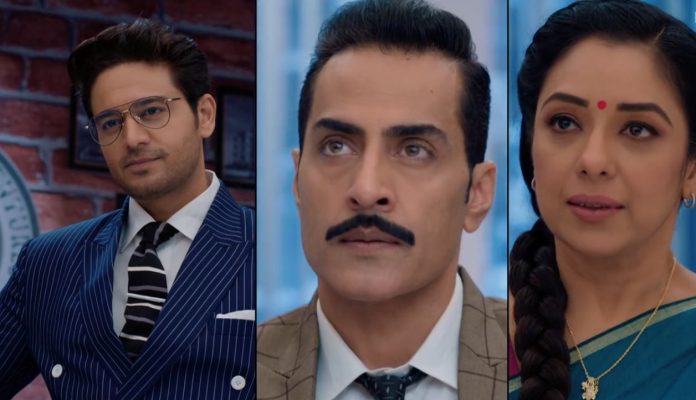 Anupama Upcoming Major twist Anuj Anupama Love story begins GK teases Anuj for hiding his emotions for Anupama. He asks Anuj to share his feelings. Anuj tells that Anupama joints a family, it would have been really tough for her to take divorce and stay in the same house for the sake of the family. He finds her very courageous. He tells GK that he has just one complain with Anupama, that she never realized her potential. He realizes that she is a strong and independent woman, but she doesn’t know her true potential. GK asks him to take charge.

Anuj doesn’t think she needs him, Anupama will not need anyone’s help. GK tells that she will need a companion. Samar and Nandini’s differences stay. They long for each other. Kavya and Vanraj prepare to meet Anuj. Kavya asks Anupama to accompany them, since Anuj is her friend. Anupama refuses to accompany. Vanraj is okay with her decision. Kavya insists Anupama to come, because they need her to connect them to Anuj. Anupama finds Kavya getting selfish again. She refuses. Anuj is tensed to meet Anupama and Vanraj in the meeting. GK wishes him all the best.

Kavya wants to look the best. Vanraj asks her not to do anything stupid. Kavya insults GK as a domestic help. Anuj takes a stand for GK. He tells her that GK isn’t just a helper, he is everything for him. Kavya makes an apology. Anuj gives a stern warning to her. Anupama joins them and surprises Anuj. Anuj finds the cold relations between Vanraj and Anupama. He watches Vanraj still dominating Anupama. Anupama tells Vanraj that she wasn’t coming, but Hasmukh and Kinjal forced her to go.

Anuj gets into an embarrassing moment when GK asks him to drink milk, while others are served coffee. Anupama gets a laugh. Hasmukh finds Leela upset because she can’t tolerate Anupama and Anuj’s friendship. Anuj asks them to start the presentation. Kavya shares her research. Kavya gets excited. She tells that she had ideas, but not finance. She asks Anuj to finance their ideas. Vanraj tells that they had the ideas. Samar doesn’t meet Nandini. Hasmukh asks Samar to respect and value love. He asks Samar not to lose his love for everything. Anuj likes Vanraj and Kavya’s ideas. He waits for Anupama’s presentation to decide.

Vanraj asks Anupama to share her ideas. Anupama and Vanraj laugh on Anuj’s joke. Vanraj’s smile vanishes when Anuj calls Anupama as Anu in a friendly way. Anuj tells Anupama that he is waiting. GK tells that he is waiting since 26 years. Vanraj gets confused hearing that. Vanraj grows insecure when Anuj stops Anupama to return the tiffin. Anupama tells that Anuj just wanted to return the tiffin, there was no other reason. Vanraj taunts her for delaying so much. He doubts that Anuj has feelings for Anupama.

Reviewed Rating for Anupama Upcoming Major twist Anuj Anupama Love story begins: 5/5 This rating is solely based on the opinion of the writer. You may post your own take on the show in the comment section below.