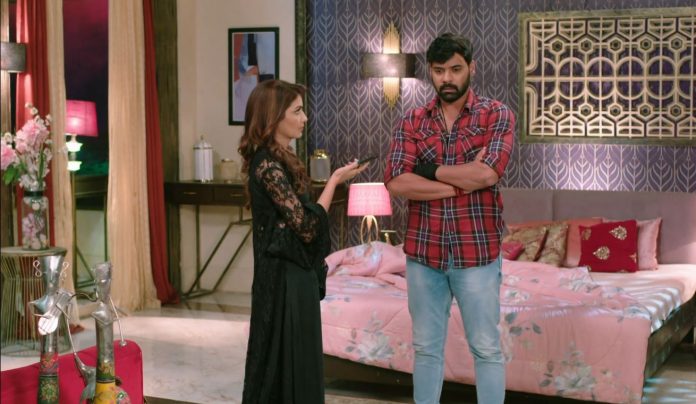 Kumkum Bhagya 11th September 2021 Written Update Love echo Pragya tells Abhi that she had got the cockroaches and stopped the party for time being, she got the time to throw the alcohol. Sumit apologizes to her from Abhi’s side. Pragya tells that she is upset with Abhi, not them. They apologize to Pragya and make a leave. Anchal also goes away. Abhi and Pragya have a nok jhok. He tells her that she made her friends leave. She tells him that she will leave now, since her work is over. Rhea wants Prachi to come and help her in work. She wants to get Prachi from the room so that she can get Prachi’s assistance. She doesn’t find Prachi in the room.

She wonders where did Prachi go. Prachi is worried that Rhea is handling the work alone. Ranbir asks her not to worry, Pallavi refused her from doing anything. He asks Prachi not to get scolding from Pallavi again. He wants her to enjoy the moment. Ranbir and Prachi get happy sharing a moment. Rhea wants to become good in Ranbir’s sight to win his heart. Pragya prepares to sleep. Abhi is depressed. Pragya is happy that she stopped him from drinking.

He tells that she is happy after ruining his party. She tells him that she failed him in his own plan, he wanted to trouble her. Pragya asks him why did he show her inferior in front of his friends. She advises him to consume his anger as he consumes alcohol. They both don’t agree on one thing.

Pragya acts innocent and good-hearted like before, as if she has given up her revenge motives completely. She tells that she can accept anything if Abhi quits drinking. She calls Prachi to inform about her plan’s success. Ranbir and Prachi return home at night, only to get confronted by Rhea. Rhea fakes her concern for Prachi in front of Ranbir. Prachi asks Ranbir to tell Rhea that he had forced her to accompany on the drive. Ranbir tells that the long drive plan was of him. He tells that he will inform the family next time when he plans an outing. Rhea tells that she was genuinely concerned for Prachi.

Prachi asks Rhea to call Ranbir if her phone doesn’t connect. Rhea tells that she didn’t knew they are together, she didn’t wish to disturb him. Ranbir tells that he will be glad if she calls him and asks about Prachi, Prachi will be happy seeing her sister’s worry. Pragya informs Prachi and Ranbir that she had stopped Abhi’s party by leaving the cockroaches. Prachi finds the situation really funny. Ranbir tells that Abhi will take revenge on her. Pragya tells that she knows to handle him, she will make him quit drinking.

Prachi and Ranbir wish her all the best. Siddharth realizes that Rhea keeps the pillows between them to stay away from him. He wonders why is she maintaining the distance. He thinks if she isn’t able to forgive him. She wants to stay in Ranbir’s room. She doesn’t accept Prachi as her sister. Rhea doesn’t know how long will she act like a good wife, Siddharth will know the truth that she didn’t accept him as her husband.

Elsewhere, Tanu overhears the conversation of Abhi’s friends. She learns that Abhi had invited his friends home. Sumit feels Pragya did this for Abhi’s health, he understands her, he can see her goodness. Amit asks him to quit drinking on his word. Tanu asks Gattu about Abhi’s party. She tells that they should buy some alcohol for Abhi, else he can’t get a good sleep. She wants to spoil Abhi and Pragya’s peaceful life. She goes to buy some alcohol for Abhi. She asks Gattu to deliver the alcohol to Abhi, he is upset with her, but she cares for him. Tanu wants to ruin Pragya’s peace when she sees the sight of Abhi drinking again.

Abhi gets restless. He tells Pragya that he doesn’t get sleep until he drinks at night. He is angry at her. He tells her that she should know the reason of his anger. He disconnects Sushma’s call. He asks her not to give importance to anyone else when he is with her. She wants to speak to Sushma. He refuses to give her phone. She refuses to hear him out. He gives her phone. Abhi wants his right to speak out his heart. Love forms a place between them once again. Will they realize they are meant for each other? Keep reading.

Reviewed Rating for Kumkum Bhagya 11th September 2021 Written Update Love echo: 3/5 This rating is solely based on the opinion of the writer. You may post your own take on the show in the comment section below.