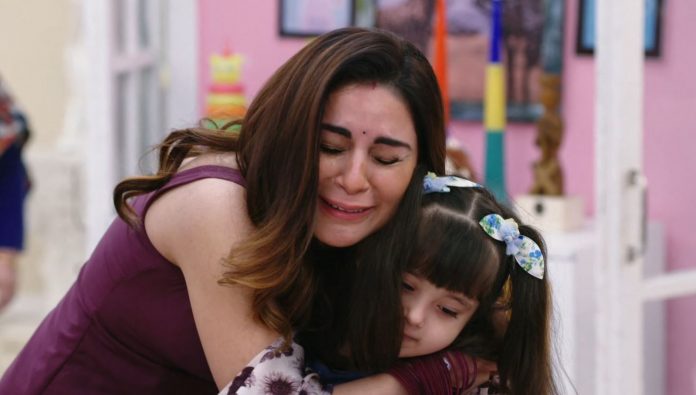 Kundali Bhagya 11th September 2021 Written Update Twist Kareena has overheard Yashvardhan and Sonakshi’s conversation. She heard him asking Sonakshi to forget her daughter, she can’t raise her alone and take care of her, else she will have to face the questions of the society. Sonakshi tells that he is heartless. He tells her that he has a heart so he kept the baby alive and dropped the baby the orphanage. He tells that he has a respect in the society, he can’t tell her about her daughter, if he tells her the name of the orphanage, then she will bring her daughter and raise her as a single mother.

He doesn’t want any more defamation because of Sonakshi. He tells her that he will not help her now. Sonakshi tells him that he can do whatever he finds right, but its her promise that she will find out her daughter, she will raise her daughter and not let him play with an innocent life. Kareena gets overjoyed that Karan’s heir is indeed in the world. She wants to claim the heir. She asks Yashvardhan about Karan’s daughter.

He denies that the baby was stillborn. Kareena tells him that he has lied a big thing, he lied to Sonakshi about her baby just for the sake of his respect. She threatens him to expose his filthy plan in front of the media, that would destroy his image. She tells that Sonakshi would leave him and raise her daughter as a single mother, he will be left alone just for his false pride. She asks him to tell her about Karan’s daughter, she will make the girl a part of the Luthra family. She gives him an ultimatum.

Yashvardhan asks her to promise that she won’t tell anything to anyone. Kareena promises her. He tells her about Pihu. He adds that he loves Pihu, he is taking care of her, but he is helpless to leave her at an orphanage. She gets the orphanage’s details from him and rushes to meet Pihu. Kareena tells the Luthras that she had no other option left knowing Preeta can’t conceive now, she can never have a child, Mahesh also slipped in depression, the family wasn’t able to accept the sorrow. She adds that Rakhi used to weep in the baby room, the entire family were so depressed, that she thought of this solution.

Karan tells her that this isn’t a solution. Kareena tells that she wanted to meet Karan’s daughter once, she went to the orphanage to meet Pihu, she felt bad that the Luthras heir is in the orphanage. She didn’t wish any random family to adopt her or live a bad life in the orphanage. She exclaims that she had convinced Karan and Preeta to adopt a child, she got Pihu home where she actually belongs. She didn’t wish Pihu to be called an orphan when she has a big family of her own. She tells that her intentions were good.

She asks Sonakshi why did she not demand to know about her daughter, she didn’t care and wanted to start a new life. She blames Sonakshi for finding out about Pihu when Karan and Preeta adopted her. She tells that Sonakshi has come to live with Karan. Sonakshi tells that Pihu is her daughter, she wants her daughter for herself, while the Luthras have each other as family. She doesn’t have anyone as her family. She claims Pihu. Karan tells Sonakshi that Pihu will not go anywhere. Preeta runs to Pihu and breaks down emotionally.

She hugs Pihu, being afraid of losing her. Sarla and Rakhi try to console Preeta. Karan wants Pihu for Preeta. Preeta understands that Sonakshi has come to take Pihu. Sarla tells that Sonakshi can’t take her. Shrishti asks if its proved that Sonakshi is Pihu’s mum. Sarla tells that its proved, but Preeta is Pihu’s mum now. Preeta requests everyone to stop Pihu from leaving, when Pihu accepted her as mumma. She requests Karan to stop Pihu. She promises to always love Pihu the same way, even when she knows that Pihu is Sonakshi’s daughter.

She wants to raise a voice for her daughter. Rakhi asks Sonakshi to leave before they call the police to throw her out. She warns Sonakshi against attempting to snatch Pihu from Luthras. Sonakshi reprimands the family for snatching her daughter forcibly, even after seeing the evidences. Mahesh tells that Sonakshi didn’t give any love to Pihu, she didn’t give any name as well, while they have given a name and identity of a Luthra to Pihu. He shows the door to Sonakshi. Sonakshi tells that she is Pihu’s biological family.

Rakhi calls Sonakshi selfish to claim her daughter. She promises to give everything to Pihu by making her a Luthra. Sonakshi tells that she will not leave her daughter with them. Rakhi explains her the laws. She tells that they have adopted Pihu legally. Neetu tells that Sonakshi can’t take Pihu with her after the adoption process completed legally. Sonakshi is shocked. Neetu adds that Sonakshi can’t get Pihu until Karan and Preeta give up the rights. She tells that Yashvardhan mailed the letter to them and asked them to send Pihu for adoption, he didn’t want Sonakshi to reach Pihu.

Sonakshi gets upset seeing her signatures, recalling that Yashvardhan had lied to get her signatures on the legal documents. Sonakshi tells them that her dad cheated her and took her signatures stating that its power of attorney. Kareena tells that she doesn’t think Sonakshi is so innocent. Sonakshi tells that she would have not given her daughter to anyone. She begs them to return her daughter. Kareena asks Sonakshi to leave, they don’t care about her emotions, they accepted Pihu in the family. The Luthras keep Pihu, while Preeta starts feeling sympathetic for Sonakshi. Will Preeta herself give Pihu to Sonakshi? Who will be at a loss this time? Preeta or Sonakshi? Comment your views and keep reading.

Reviewed Rating for Kundali Bhagya 11th September 2021 Written Update Twist: 3/5 This rating is solely based on the opinion of the writer. You may post your own take on the show in the comment section below.