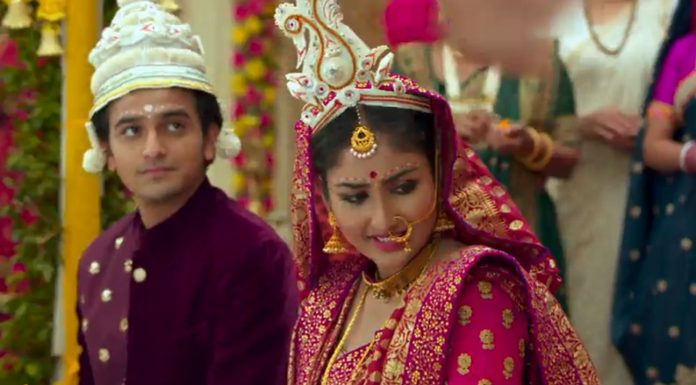 Barrister Babu 13th September 2021 Written Update Many twists begin with the beginning of Anirudh and Bondita’s marriage. Anirudh and Bondita get glad that their families are supporting their marriage and finally understand their true love. Anirudh brings Bondita to show the filmography taking place with the other mass marriage’ couples first. He tells that every couple will get filmed in their own love story, their special moments will be captured and gifted to them after the marriage. Bondita gets excited that even they will be playing the romantic couple in their love story.

Anirudh tells her that like they were Raja and Rani before, they will be hero and heroine in the film. He tells that she will be his heroine in the special film, and he will be her hero. They both happily transforming their looks for the love story. Chandrachur takes a disguise to reach Bondita. He becomes a make up artist to reach close to Bondita and faint her down by using the chemicals, without making her realize that the makeup is actually making her lose consciousness. He plans to kidnap her and take her to Dhaka.

He thinks Bondita will be marrying him. He dreams of winning her. Bondita stays alert of his actions. She fights him when he attempts to kidnap her. She gets a knife fallen there. In order to protect herself, she stabs his leg. Chandrachur gets injured and falls there, but he manages to flee before she identifies him and learns his true intentions.

Bondita protects herself. She returns for the film shoot. Chandrachur wants to stop the marriage at any cost. Anirudh and Bondita reach the marriage mandap, where Chandrachur unwillingly brings the garlands for their jaimala. Bondita is shocked to see Chandrachur’s leg injured, which makes her suspect him. Chandrachur comes up with an excuse. Will Bondita get convinced by his lie or understand his evil intentions? Keep reading.

Bondita mends her relation with Trilochan, to get his blessings back. She doesn’t remember his bitterness, but just his guidance and love. Trilochan and Sampoorna are happy to find their old Bondita back. Trilochan blesses Bondita and heartily accepts her as his Bahu when she requests to get her rights to call him Kaka Sasur like before. Trilochan tells that he would be happily declaring to the world that Bondita is going to become his Bahu. He wants Anirudh and Bondita’s marriage to happen as soon as possible, so that he can welcome his house Laxmi home.

Bondita gets delighted. Both the families dine together, while Chandrachur expects a call from Musa in order to make arrangements of his trip to Dhaka, once he kidnaps Bondita. Chandrachur wants to separate Anirudh and Bondita forever, and also breaks their wedding banner in rage. Chandrachur’s call gets attended by Somnath, who informs the family about the strange caller from Dhaka. Anirudh suspects that something is wrong. He doesn’t want to take any chance this time. He knows that there is still enmity on some people’s minds, who would try to spoil the friendly terms between both the families.

He doesn’t want to let such enemies win in their enmity. Anirudh calls the telephone exchange to gather the details of the caller. Chandrachur makes his plan more certain by seeking Musa’s help. He plans Bondita’s kidnapping to take her away to Dhaka, where Anirudh can never reach them. Anirudh and Bondita share a moment of love confession. They both confess their love and get happy to pass the last night that’s between them. They look ahead for their marriage scheduled on the next day.

Bondita and Anirudh don’t meet each other, but stay lost in their thoughts. Bondita arrives for her haldi, and keeps her two conditions for marriage. Anirudh accepts her simple conditions, that he will be becoming a son for her mother, and also become Bondita’s friend for life. Anirudh and Bondita rejoice in their haldi ceremony, while Chandrachur plans the kidnapping.

Reviewed Rating for Barrister Babu 13th September 2021 Written Update Twists: 2/5 This rating is solely based on the opinion of the writer. You may post your own take on the show in the comment section below.