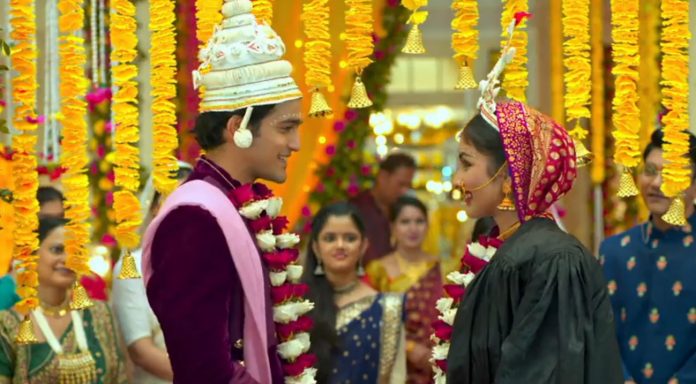 Barrister Babu 16th September 2021 Written Update New Journey Anirudh and Bondita finally get married. Chandrachur doesn’t let his truth come out. The marriage track moves on a quick pace. Everyone rushes in the episode. Chandrachur makes sure that Bondita doesn’t suspect his real intentions. He cleverly manipulates Somnath into the situation. Anirudh dramatically pays respect to Bondita in the from of the barrister robe. He completes his old promise by turning her into a barrister.

Anirudh fulfills his promise and makes Bondita more proud of her love. He proves that he is the best companion for her. Bondita is glad to wear the barrister robe by Anirudh’s hands, while they proceed with their marriage rituals. Anirudh and Bondita exchange special vows of marriage.

He doesn’t want her to lose her individuality while she fulfills her duties as his wife. He makes Bondita promise that she will do justice with her barristry duty, and never tolerate any injustice. Bondita promises to balance her marriage and barristry. She doesn’t want to stumble and lose in any of her duty. She knows Anirudh will always be there with her. She makes Anirudh proud of her.

The couple gets married, and exchange a moment of love confession. They decide to fight against the bad customs of the society and set an example for many. They want to change the society into a clean environment filled with peace and love. Anirudh and Bondita begin their new journey, by stepping into their marital phase. What new challenges will be posed for them? How will Chandrachur attempt to drift them apart? Comment your views and keep reading for a full update.

Trilochan and Sampoorna welcome Anirudh and Bondita in the house. Bondita is happy to enter the house as Roy Choudhary Bahu once again. The flashes of the past make her emotional. Anirudh tells her that its her house and her family from now. Trilochan blesses them to never get separated again. He wants Bondita to always stay with them and never leave the house like before. Bondita tells them that she will not go anywhere now, she will always be with Anirudh. Sampoorna asks them to thank Durga Maa for their union.

Anirudh and Bondita thank Durga Maa for uniting them against all odds, and moreover, ending the enmity between the families. Chandrachur fails to tolerate the sight of their smiling faces. He decides to win Bondita physically, if he has lost in the game to win her heart. He wants to spend the wedding night with her, irrespective of the fact that she got married to Anirudh. Chandrachur makes an evil plan to cheat Bondita and win her. Someone overhears his cheap plotting. Chandrachur stays cautious to find out the person who learnt his plan.

Chandrachur keeps an eye on Bondita. He realizes that someone who heard his conversation with his aide will definitely rush to Bondita to alert her. Anirudh and Bondita are asked to stay apart for another night, until the post marriage rituals complete. They both agree to undergo the rituals. The families are happy with their happiness. Chandrachur gets too jealous seeing them, and vents anger on his wife Tupur. Chandrachur’s slap raises an objection from Anirudh and Bondita.

Thakumaa and Trilochan don’t think that its a big thing if a husband slaps his wife in anger. Anirudh doesn’t want anyone to support or encourage a wrong behavior. Anirudh strongly opposes Chandrachur and wants him to apologize to Tupur. Chandrachur refuses saying he isn’t Anirudh’s slave to obey his command. Bondita too sternly opposes Chandrachur’s misbehavior, which made him fall in her sight. She tells him that she won’t respect a devil like him from now. Chandrachur doesn’t think of anyone now.

Chandrachur and Anirudh get into a heated argument. Bondita too joins Anirudh in the battle against injustice. She asks Tupur to slap Chandrachur if a slap is regarded a symbol of love. Chandrachur gets raged. Bondita explains the importance of women in a family. She tells that every woman deserves love and respect from her husband. Anirudh and Bondita take a firm stand to fight against domestic violence and women justice. They want to carry on the battle with the society to change their thinking, and get equal rights for women. What will Chandrachur do next? Keep reading.

Reviewed Rating for Barrister Babu 16th September 2021 Written Update New Journey: 3/5 This rating is solely based on the opinion of the writer. You may post your own take on the show in the comment section below.