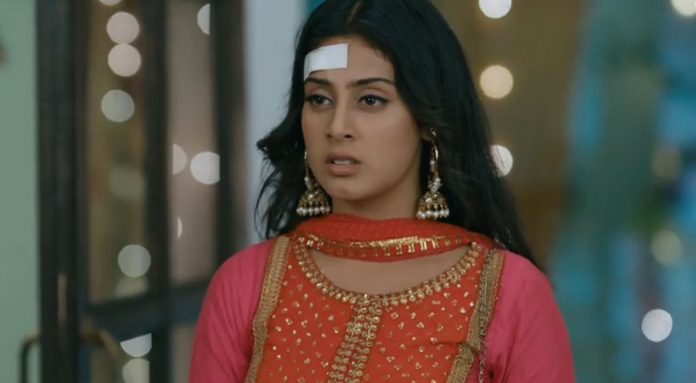 Udaariyaan 16th September 2021 Written Update Jasmin’s evil The Virk family decides to create situations which makes Fateh realize his mistake of dumping his wife for a selfish girl like Jasmin. They want Fateh to realize Tejo’s worth, who is far better than Jasmin. They know the fact how Jasmin cheated her own sister and parents for the sake of her selfish love. The family wants to open Fateh’s eyes, that Jasmin can’t be loyal to him if she isn’t loyal towards her own family.

Fateh really needs to know that Jasmin doesn’t love her own sister and parents, she doesn’t even have any emotions for his family, but simply boasts of her true love for him. Fateh will soon learn the game played by Jasmin when she burnt Rupy’s passport instead her own. Fateh starts seeing differences between Tejo and Jasmin, once Tejo agreed to divorce him. He feels he has lost Tejo forever. The sudden loss makes him realize Tejo’s goodness and values, which aren’t seen in Jasmin. Fateh still sticks to his love and loyalty for Jasmin. Khushbeer and family see Jasmin’s truth surfacing.

They want Fateh to observe Jasmin’s selfishness and step back. The family hopes to stop the divorce. Jasmin gets angered recalling the insult from her parents. She isn’t thankful that she got a place in the Virk family, thanks to Tejo’s sacrifice. She decides to oust Tejo from the house. Jasmin stoops low and starts troubling Tejo. She makes Tejo’s stay in the room impossible by leaving something stinking there. Tejo gets forced to leave the room. Jasmin wants to trouble Tejo so much that Tejo returns to their parents’ house.

She promises to oust Tejo from the house. She doesn’t realize that her madness is actually bringing Tejo and Fateh closer. Tejo is left with no option than to sleep in the living room. She sees Fateh sleeping on the sofa. Tejo makes her bedding there and lies down, watching Fateh and recalling their moments. Jasmin’s plan backfires, when Tejo reaches Fateh after leaving the room. Jasmin gets restless to see them together. Fateh is living under a misunderstanding that Jasmin’s love for him is selfless and true, she can give her life for him, while Tejo was also cheating him by having an affair with Buzo. Will Fateh learn Tejo’s truth and Jasmin’s evil side? Keep reading.

Tejo and Fateh’s distance gets shorter by Jasmin’s evil ploy. Jasmin makes Tejo’s stay impossible in the room by her plan, and thinks to taunt Tejo for making her out of the room. She asks Tejo why did she leave the room at night. Tejo tells that some weird smell is coming inside the room and the reason isn’t known. She chooses to sleep in the hall, because Nimmo is already sleeping in Mahi’s room.

Jasmin doesn’t want Tejo to blame her for spreading the foul smell in her room. She offers Tejo to sleep in the guest room if she wants. Tejo suspects her more when she turns sweet. She answers Jasmin well and makes her leave. Jasmin is happy that Tejo has no place to sleep. She gets enmity on her sister. She plans to get Tejo out of the house. She goes back to check where is Tejo sleeping.

She is shocked to see Tejo sleeping opposite to Fateh’s couch, and gets raged up. She didn’t want them to come close. Jasmin controls her anger. Fateh wakes up at night and finds Tejo around. He cares for her like a friend, and lends his blanket to her. Tejo holds his hand in her sleepy state, making him feel guilty. The family feels bad seeing Tejo sleeping in the living room. They wake up Tejo to know the reason. Jasmin gets happy seeing the family troubled by her plans. Tejo complains about the bad smell.

The family goes to check the room, and decide to get the room cleaned. Jasmin doesn’t reveal about the rotten thing she kept in the room. She is sure that they will never be able to find it. While Tejo looks after the family and the puja preparations, Jasmin gets busy demanding Fateh a new dress. Fateh gets compelled to go to Tejo’s room. He learns about the problem there. He picks a saree which he bought for Jasmin and opposed Tejo when she had worn it. He gets the saree for Jasmin and asks her to wear it.

Jasmin asks him if Tejo has worn it. He lies to her that he doesn’t remember. He asks her to get ready. She gets excited for her first festive in the family. Amrik and Khushbeer leave some taunts on Fateh for his careless attitude. Tejo’s family visits her and share their concern because Jasmin is also living in the same house. They express their worry because of Jasmin knowing Tejo is too sensible to handle herself.

Tejo’s room problem doesn’t get any solution. Khushbeer asks her to occupy Amrik’s room. Tejo doesn’t want anyone to get troubled. She decides to go home with her parents until the problem ends. Khushbeer asks her to do as she likes. He trusts her. Biji makes Tejo promise that she will come back soon. Tejo plans to leave after the Visarjan function. Jasmin wears the saree to hurt Tejo. She meets Tejo to present herself in the gifted saree. Tejo doesn’t care. Jasmin insults her again. Tejo warns her that she will not forgive her this time if Jasmin is the reason behind the room’s problem. She suspects Jasmin’s filthy plans and wants to find out the truth. Will Jasmin get caught? Keep reading.

Reviewed Rating for Udaariyaan 16th September 2021 Written Update Jasmin’s evil: 3/5 This rating is solely based on the opinion of the writer. You may post your own take on the show in the comment section below.