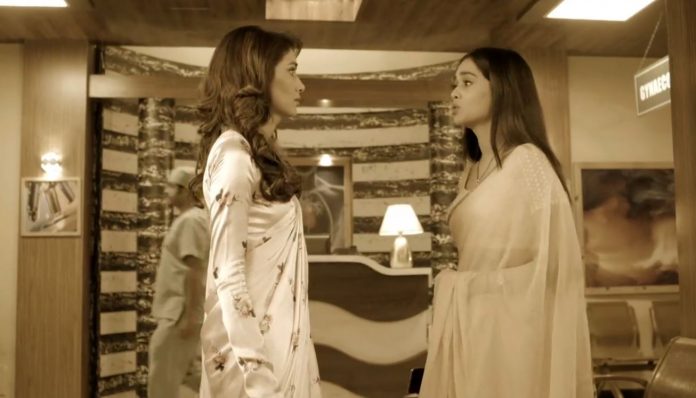 Kumkum Bhagya 16th September 2021 Written Update Right track Prachi informs Ranbir that Abhi is recovering, she won’t meet him, because he didn’t forgive her till now. She doesn’t want to anger him. She tells him the shocking revelation of Pragya’s past. She tells Ranbir that Pragya was suspecting Abhi that he planned to murder her, she was misled by Aaliya. Rhea overhears Prachi and Ranbir’s conversation. Prachi tells that she has cleared Pragya’s misunderstanding, Aaliya and Tanu had separated them by the big conspiracy. She is hopeful that Pragya will accept Abhi, she can never hate Abhi, she is ready to reconcile, she would believe Abhi and love him like before.

Ranbir tells that its good that Prachi united them. He asks Prachi to come home, he is missing her a lot. Sushma asks Prachi to go home. Rhea learns that Prachi is uniting Abhi and Pragya. Rhea gets Ranbir’s attention. Siddharth finds them close. He misunderstands them. Sushma is thankful that Prachi got a relief for Pragya finally. Prachi thanks Sushma for saving Pragya’s life and giving her a new life. Siddharth questions Rhea.

Ranbir and Rhea tell about the mosquito bite. Rhea tells that she asked Ranbir to help her. Siddharth shows his faith on Rhea. Rhea gets upset that Siddharth broke Ranbir and her moment. Manish informs Aaliya that Abhi is hospitalized. He enquires about Pragya. She tells that Pragya is his wife now. She get worried for Abhi.

Ranbir gives a card to Prachi with the best daughter tag. He tells her that he so wanted to give her the wishes, since he didn’t see such a nice daughter till date. He adds that her parents should have given the card to her, that day will also come when Abhi accepts her as his daughter again. He cherishes the moment with Prachi, while Rhea is still watching them. Prachi is elated seeing the card. Rhea shocks Prachi by telling her that Abhi and Pragya aren’t made for each other, problems will begin once they unite. She asks Prachi not to unite Abhi and Pragya, who will be more happy if they live separated.

Prachi is shocked to know Rhea’s thinking about her parents. Aaliya gets fed up of Tanu’s tantrums. She is worried for Abhi further, and regrets that Tanu sold him to Pragya. She wants to bring Abhi home from the hospital, and look after him. Baljeet knows Aaliya’s to and fro concern which won’t last long. She tells that Pragya would take good care of Abhi, nobody needs to worry for Abhi when Pragya is there. She asks Aaliya not to bring Abhi home. Baljeet prays that Abhi and Pragya unite forever once again. Pragya anxiously awaits Abhi’s consciousness to tell him that her misunderstandings got cleared. What will Aaliya do against Pragya this time? Keep reading.

Aaliya learns that Abhi is in the hospital. Manish tells about Abhi’s head injury, he isn’t in a good state. Aaliya worriedly runs to see Abhi at the hospital. Ranbir tells Prachi that he was waiting for her return to get a hug from her. He tells that he didn’t call her many times to disturb her knowing she has gone for an important work. He wants to romance Prachi. He gets disturbed by the househelp. He tells Prachi that they shall go back to their old house to get their privacy. He misses their old privacy.

He praises Prachi for being the best daughter, she has united her parents, she has been an angel for Abhi to end his problems, she has been a blessing for Pragya. Rhea watches their moment. Prachi asks Ranbir not to make her a great figure. Ranbir tells that he loves her a lot knowing her qualities. Prachi hugs him. Ranbir tells that he is proud of her. He goes to make her favorite tea. Rhea rebukes Prachi for uniting Abhi and Pragya, then they don’t stay happy together. Prachi tells that Abhi wasn’t able to live without Pragya. Rhea tells that she knows everything about him. She asks Prachi not to ruin everyone’s life. She shouts on Prachi just like the old times. She blames Prachi. She asks Prachi not to interfere in anyone’s life.

Rhea tells Prachi that Pragya got separated from Abhi before as well, and he was living happy with the family, but he lost happiness when Pragya returned. She tells that Prachi made a big mistake. Prachi gets thoughtful after hearing Rhea. Aaliya learns that Pragya took Abhi home. She asks Manish not to inform Tanu about Abhi. She thanks him for informing about Abhi. Aaliya wants to get Abhi home. Ranbir gets the tea for Prachi. He finds her upset. Prachi tells him that Rhea didn’t change, she is just like before, she was fighting her for the day long absence. Ranbir asks Prachi if she is hiding something.

She tells that there is no other reason. He asks her not to think about Rhea, sisters do have fights, its normal. Prachi can’t express what she felt. She has seen the same Rhea filled with hatred and bitterness. She is hurt to see the old Rhea back. Aaliya meets Rhea and hugs her. She tells Rhea that she missed her a lot. Rhea asks her what is Abhi doing with Pragya, how did they unite. She doesn’t want to know the reason. She asks Aaliya how did she let it happen. Aaliya tells that she is very happy seeing Rhea after a long time. She asks Rhea about her marriage.

Rhea tells her that she got married, she has become Kohli family bahu, she is living with Ranbir in the same house by marrying his cousin Siddharth. She tells that she will soon unite with Ranbir, by snatching him from Prachi. She reveals that she is too hurt to watch Prachi and Ranbir. She asks Aaliya how could she let Abhi and Pragya, that’s the worse thing. Aaliya apologizes to her. She promises to not let Abhi and Pragya. She also promises to get Ranbir for Rhea. She tells that she will also not believe or value her marriage with Siddharth. She promises to fix everything in Rhea’s life.

Rhea apologizes to Aaliya for scolding her. Aaliya tells Rhea that Abhi is not at the hospital, he has gone with Pragya to her house. She asks Rhea to go home and leave things to her. Rhea asks Aaliya to separate her parents. Aaliya tells her that Abhi is happy without Pragya, she will separate them, and also Ranbir and Prachi. She asks Rhea to apologize to Prachi and win her confidence back.

Rhea feels she can’t live without Ranbir. Aaliya asks her to not worry. Aaliya goes home and learns from Baljeet that Mitali and Tai ji tried to break the locker to steal the money. She wants to bring Abhi home. Baljeet tells that Pragya will look after Abhi, Tanu will never take care of him. Aaliya tells that Pragya is unlucky for Abhi, he fell down the stairs and got severely hurt, Abhi should return home for his safety. Tanu learns about Abhi’s accident.

Reviewed Rating for Kumkum Bhagya 16th September 2021 Written Update Right track: 5/5 This rating is solely based on the opinion of the writer. You may post your own take on the show in the comment section below.