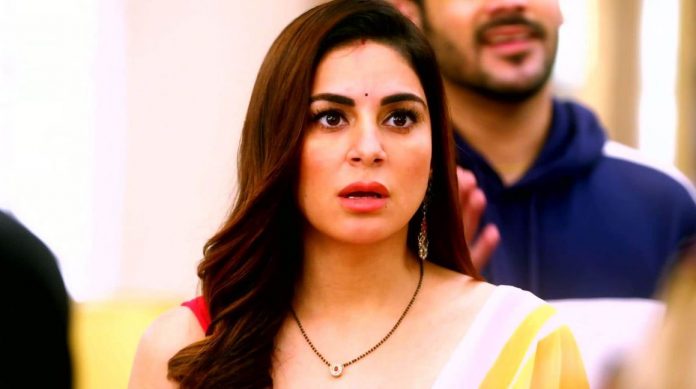 Kundali Bhagya 16th September 2021 Written Update Karan’s arrest Preeta and Rakhi get busy in the preparations for Ganesh Chaturthi. Rakhi tells that Preeta will really get busy when the guests start coming and workload gets more, in such a case, the Nanny will look after Pihu. Preeta wants to keep Pihu with her all the time. Pihu spends some time with Sonakshi, which makes Sonakshi more willing to get her daughter back. She tells Preeta that she will go away once she recovers. Karan and Preeta believe Sonakshi, and aren’t aware of the unexpected troubles walking into the house.

Sherlyn’s prediction gets right about Sonakshi, that the former is faking goodness and fooling the entire family. Sonakshi deliberately asks Preeta and family not to inform her dad about her accident. She knows that her dad will track her and pose a problem for Luthras. Sonakshi stays with the Luthras. The family receives a big shock when Yashvardhan arrives home with the police. Inspector demands Karan to come with them for interrogation.

Karan is puzzled that the police wants to take him. Rakhi and entire family get too worried. Rakhi asks the Inspector about Karan’s crime, what did he do that he would be taken along. Yashvardhan tells Rakhi that they will have a long discussion, but after Karan’s arrest. The family is shocked to know about Karan’s arrest. Preeta asks the reason, the charges for the arrest.

Inspector informs them about Yashvardhan’s complaint against Karan for Sonakshi’s kidnapping. The family is moved to know such a wrong accusation on Karan. Rakhi and Preeta defend Karan that he didn’t kidnap Sonakshi. Mahesh gets angry at Yashvardhan for his move. Kareena tells that its Sonakshi’s plan to act of keeping her dad in darkness and then calling him home to get Karan arrested, just because the family kept her daughter. Kareena gets raged at Sonakshi’s plans. Sherlyn proves to Prithvi that she was right about Sonakshi. Rakhi and Preeta oppose the blames. Yashvardhan asks them about Sonakshi. He wants them to bring Sonakshi to him if they aren’t hiding his daughter. Is Sonakshi really behind the conspiracy? Keep reading for a full update.

Karan and Sameer have a competition. Karan loses when he gets a call. The family gets happy seeing Pihu keeping the competition. Karan asks Sameer not to do cheating. Preeta gets milkshake for Pihu. Karan tells that nobody loves him now. He snatches the chocolate from Sameer and runs. Bani asks them not to fight. Mahesh tells that Karan and Sameer are mad since childhood. Pihu goes to get another chocolate for them. Yashvardhan walks in while the police asks for Karan Luthra. He tells them that they will talk after Karan’s arrest.

Inspector tells that Karan is accused for Sonakshi’s abduction, he has to come with them to the police station. Preeta tells Yashvardhan that she used to respect him before, but he has lost all the respect now. She reprimands him for his lies to his own daughter, due to the fear of the society. She asks him why is he blaming Karan, when he knows that Karan can’t do anything. Yashvardhan doesn’t care what Preeta thinks of him.

Yashvardhan asks why did they keep her at home. Kareena tells the police that Sonakshi met with an accident, they took Sonakshi to the hospital and got her treated, Preeta had tried to inform Yashvardhan, Preeta got her home to take care of her. Yashvardhan asks why didn’t they call him. Mahesh tells that he has called him as well. Yashvardhan accuses them for trying to kill Sonakshi. He asks them why didn’t they inform him about the accident. He asks Inspector to arrest Karan. Preeta and Kareena ask the Inspector not to dare touch Karan. Sonakshi meets them. Yashvardhan gets worried seeing her state.

He asks her if Luthras tried to harm her. She tells that they saved her life, she was under pressure because of her dad, who is the real culprit. She blames him for always doing injustice with her. Yashvardhan tells that he was madly finding her, he isn’t plotting to get Karan arrested. He asks her to think of his respect in the society. He wants to take her home. She refuses to him. She tells that she isn’t scared of Luthras, but of his lies. He asks Inspector to arrest Karan, Sonakshi is manipulated by the family. Sonakshi asks Inspector not to trouble the family.

Yashvardhan asks Sonakshi to live with Luthras. He leaves from the house. Sonakshi cries that she lost her only relation, her dad. Preeta tells Sonakshi that she can stay with them in their house until she recovers. Karan and Kareena raise an objection, sensing its Sonakshi’s plan. Bani supports Preeta’s decision. Kritika calls up Shrishti and informs about the big problem. She tells Shrishti that Yashvardhan came home to abandon Sonakshi, its a big problem, Sonakshi will stay in the Luthra house now.

Reviewed Rating for Kundali Bhagya 16th September 2021 Written Update Karan’s arrest: 3/5 This rating is solely based on the opinion of the writer. You may post your own take on the show in the comment section below.