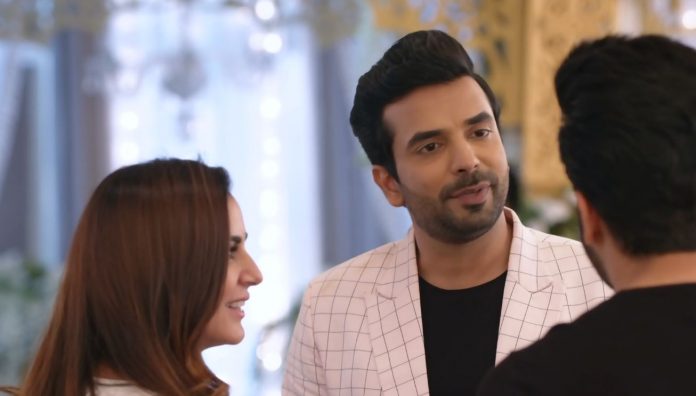 Kundali Bhagya 18th September 2021 Written Update Rishabh meets Pihu Yashvardhan and Sonakshi’s plan gets known as part of the flashback, when Sonakshi tells him that she is in love with Karan since ever, she wants him in her life. Yashvardhan was ready to get Pihu to her, and support her decision, but he receives a shock on her demand for Karan. He realizes that she really loves Karan a lot. He can’t see his daughter ruining her life in madness. He promises her that he will get Karan for her, but it will take time. He asks Sonakshi to follow up their plan and make an entry in the Luthra house.

Yashvardhan and Sonakshi cleverly plot the fake claim for Pihu and also the accident-police drama to make Sonakshi stay in the Luthra house. Sonakshi ends her sweetness drama and shows her actual truth. She madly wants Karan, and gets envious towards Preeta. Sonakshi doesn’t want Preeta in Karan’s life. She hides her deadly vicious intentions from the family, though Sherlyn has sensed it well. Rishabh arrives home. He meets Pihu and likes her a lot. He tells Pihu that she is really cute. He congratulates Preeta that she has entered the phase of motherhood. He tells that Pihu is a blessing for them.

Karan asks Rishabh why didn’t he congratulate him for becoming a father. Rishabh asks him to wait until they go upstairs and have a brotherly talk. He asks Karan if he wants all the wishes at once, like women do. Preeta laughs hearing them. Sherlyn and Prithvi get alert seeing Rishabh back. Prithvi rushes to work out his plan to ruin the Luthras without getting caught. What twists will Rishabh’s entry bring? Keep reading.

Yashvardhan drinks in sorrow. He calls up Sonakshi, but she doesn’t answer because of Sherlyn. He wants her to understand that Karan is the reason that her life got ruined. He is angered that Karan and Preeta adopted Sonakshi’s daughter, but still Sonakshi tried to attempt suicide. He recalls that Sonakshi was fuming and alleged him for his numerous lies. She tells him that he did a big crime, he hid about Pihu and left her at the orphanage. She is hurt that he had cheated her.

She tells him that she has found out Pihu, she wanted to take her along to London, but she got to know that Karan and Preeta adopted Pihu, they have become parents by taking her daughter. She feels their life got completed, but she lost everything. She tells him that she didn’t get her daughter and also her love. She decides to end her life, to make Yashvardhan lose his daughter. Yashvardhan stops her from the suicide attempt. He couldn’t lose his daughter. He recalls Yashvardhan promising her to get her life’s reason back, to get back Pihu. She demands Karan, whom she loves. She asks him if he can’t get Karan for her.

She tells him that she wanted to go to Karan after her child’s birth, Karan would have accepted her on seeing the child, but it was her dad’s lie that she failed in her love story. She tells that she plotted her marriage with Rajat just to make Karan realize his feelings, but he really loves Preeta.

She regrets that she accepted Rajat and wanted to move on in life, but everything went wrong. She is fed up of her life. He tells her that she could have shared this fact before that she loves Karan. He tells that he will compel Karan to marry Sonakshi. He asks her to snatch Karan from Preeta. After the flashback, Yashvardhan awaits Sonakshi. Sonakshi arrives home to meet Yashvardhan. She asks him not to call her again. She tells that she had to support Karan because she is helpless. He tells her that he hates to see her on the wheelchair. He asks her to get up. She pretends that she is hurt.

She tells that the wheelchair is helping her win everyone’s care and sympathy. She isn’t hurt at all. She tells him that his plan has worked well. He asks her to be careful of Preeta, who is really smart. Sonakshi thanks him for the car accident plan. He promises to get Karan for her. He wants her to answer his calls. She doesn’t want the family to know that she is in touch with her dad.

He asks her to be careful of Preeta. She tells that Preeta is really sweet and supportive. She isn’t scared of Preeta. She tells that Sherlyn is bothering her a lot. He assures that he will take care of Sherlyn. She tells that Bappa is coming and will unite her with Karan, whom she dearly loves. She gets mad to get Karan. Rishabh comes home and meets Pihu first. He tells her that he is Karan’s elder brother, she can call him Rishabh or Taya ji. He tells her that he knows her name, because she is really famous.

Pihu gets glad to meet him, just like he is glad. He tells her that he got many chocolates and gifts for her. The family is surprised with Rishabh’s return. Rishabh tells that he never misses Ganpati festive with the family. He meets the entire family and celebrates happiness. Prithvi too hugs Rishabh. Kritika informs that Prithvi has come from Dubai recently. Rishabh asks if Prithvi will stay with them. Prithvi tells that he will be living with Luthras. Sherlyn tells Rishabh that she is doing fine, and happy to see him. Karan meets Rishabh after a long time. They have a hug.

Karan asks Rishabh to handle his work and responsibility. Rishabh tells that they will organize a grand Ganpati festive. Rishabh congratulates Karan and Preeta. Prithvi realizes that it will be a problem to meet Sherlyn in Rishabh’s presence. Rishabh asks Karan why did he get so many girls in his life. He tells that he can’t just stay back home solving Karan and his girlfriend’s matters. Karan further tells him how Sonakshi is troubling him. Rishabh tells that he just has Sherlyn in his life, and no one else, he is really at peace.

Mahesh tells Rishabh that he can’t give him any Gyaan in front of Sherlyn. Sherlyn spies on Sonakshi. She doesn’t find Sonakshi in her room. Sonakshi reaches back to Luthra house in time through the washroom window. She ends Sherlyn’s suspicion. Sherlyn realizes that Sonakshi is very cunning and she is up to some big game, that she is pretending that she can’t walk.

Reviewed Rating for Kundali Bhagya 18th September 2021 Written Update Rishabh meets Pihu: 5/5 This rating is solely based on the opinion of the writer. You may post your own take on the show in the comment section below.