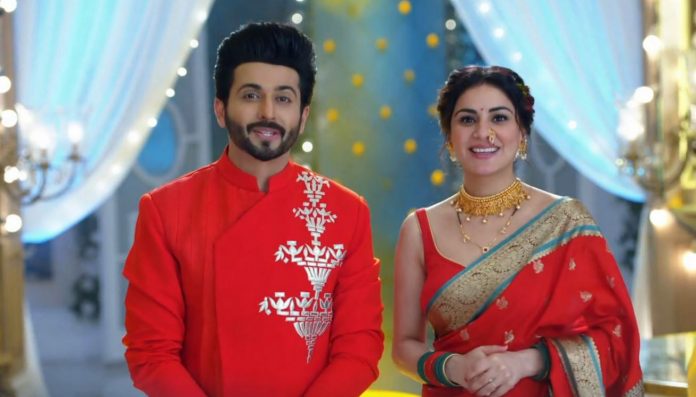 Kundali Bhagya 20th September 2021 Written Update New threat Kareena offers money to Sarla for the sweets she has made for the Ganpati festive at Luthra house. She asks the family not to get surprised, Sarla is a caterer, she worked hard and needs her payment. Sarla tells Kareena that she works herself in the catering orders, but she didn’t come as a caterer, but as Rakhi’s Samdhi. She tells that she will not charge any money, she has brought sweets to her daughter’s Sasural. She doesn’t feel bad of Kareena’s words and hugs her.

Prithvi feels Sarla has smartly shown the mirror to Kareena, who tried to insult Sarla by mentioning the payment. Preeta and Shrishti are happy the way Sarla has handled the matter. The goons/drugs dealers arrive home to get their special smuggling box. The guard stops them from going inside. The goons tell that they have come to entertain the family by their music. Guard tells that nobody from the family informed him about the band artists coming. Goons attack the guards to get an entry in the house.

Rishabh takes Kareena to the pandit. He tells her that he wants to ask the pandit, if Kareena will change ever or not. He adds that everyone has changed, but she is still the same, she was trying to give money to Sarla to insult her. She asks him what did she do. He tells that she didn’t do right. She admits that she isn’t able to accept Sarla as her relative. He asks her to convince her heart, because Sarla isn’t a nice person. He tells her that she is the best and should give others a chance as well. He convinces her to get polite towards Sarla.

She tells him that she brought Pihu home for the sake of entire family, she loves the family. He asks her not to just love the blood relations. She asks him not to judge her. He apologizes to her if she felt so. She knows that he doesn’t know to fight or upset anyone. She asks Rishabh to not leave them and go. She wants him to stay back with family and Sherlyn. She tells that Karan and Preeta got a daughter now, and their family completed. She wants Rishabh to complete his family as well. He requests her to change herself. She tells that she will try to treat Sarla well. The goons try to find their drugs.

Preeta tells that they have to give the sweet boxes to the guests. Mahesh asks the goons who are they and how did they come inside. Goons take Mahesh’s name that he called them. Mahesh tells them that he didn’t call them. He tells Rishabh and Karan that he didn’t invite the band artists, but they aren’t listening. Rishabh and Karan go to check the problem on stage. The goons find them busy and go ahead.

Preeta tells Kritika that she is happy that Sonakshi is able to walk, she will soon recover. Kritika asks her how is she able to forget the past. She doesn’t think Sonakshi can change. Preeta tells that people change sometimes. Sonakshi offers help to Preeta. She asks Preeta to handle Pihu. Goons hide the guns in the musical instruments. Preeta takes Pihu with her. She gets scared of the wires lying on the kitchen floor. Karan calls her a coward. Pihu defends Preeta. She gets upset with Karan, if he troubles Preeta. She stops Sonakshi from hurting Preeta. She gets too protective. Karan tells that they will apologize to Preeta.

Sonakshi also apologizes to Preeta. Shrishti tells Preeta that Pihu loves her the most. Sonakshi gets angered that Pihu was beating her for Preeta’s sake. She wishes to slap Pihu for her misbehavior. She wants to marry Karan by taking an advantage of Pihu. Goons want to check the boxes and take it before anyone sees them. Prithvi tells Kritika that he was working on with his mind, planning to take over the companies and make big profits. Goons pose a new threat to the Luthras. What will happen next? Keep reading.

Reviewed Rating for Kundali Bhagya 20th September 2021 Written Update New threat: 3/5 This rating is solely based on the opinion of the writer. You may post your own take on the show in the comment section below.