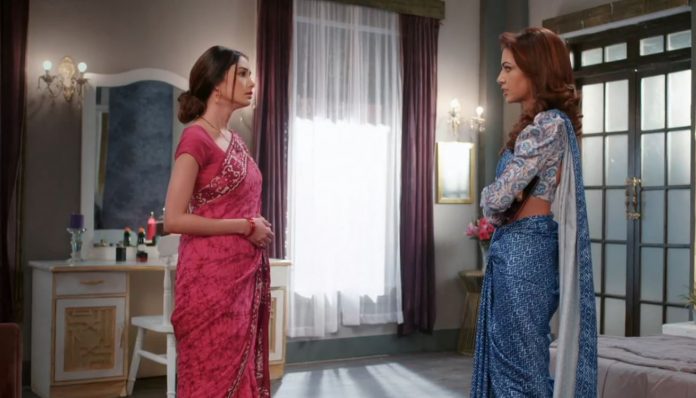 Kumkum Bhagya 22nd September 2021 Written Update Pragya warns Dida sees Rhea dancing in her room. She thinks Rhea loves Siddharth and is happy with him. Vikram recovers from his illness. He tells Dida that he wants to share Pallavi’s workload. Dida asks him if he just cares for his wife. She jokes to make him laugh. She asks him to keep laughing and stay fit. He wants to go to office and check how the business is going. He tells that Siddharth isn’t able to focus on work.

She tells that Siddharth knows to balance work and family. He knows Siddharth is hardworking. He takes her permission to spend some time in the study. They find Siddharth sleeping in the study. They question him why is he sleeping here. Siddharth tells them that he was working hard and fell asleep. Vikram tells that Siddharth is really focussed. Dida asks Siddharth to get ready and come for breakfast. Dida grows worried for him. She thinks if Siddharth and Rhea had any fight. She doesn’t understand why was Rhea so happy then. On the other hand, Baljeet asks Pragya if she felt upset.

Pragya tells that they have to stop Abhi from drinking. She asks Sushma and Baljeet to help her. Sushma tells that there is a bigger problem, which needs her attention first. Pragya asks her to share things in front of Baljeet, she is trustworthy. Sushma tells her that she heard Tanu and Aaliya planning against her. Pragya knows that they didn’t come for Abhi, but for money and property. She tells that Tanu wants to ruin her, but there is nothing to worry. She is confident that she will not let Tanu and Aaliya win.

Pragya gets their blessings. Rhea gets happy to get the house keys. She waits for Ranbir. Prachi and Ranbir come for breakfast. Dida finds Rhea bonding with Ranbir. Siddharth asks Dida to come with him. Dida wishes that she is thinking wrong. She doesn’t want her thinking to be proved right, else it will be injustice with Siddharth. Rhea senses Dida is doubting her. She treats Siddharth well in front of the family. She wants to win Dida’s trust. Dida wants to talk to Prachi and show her how Rhea is bonding with Ranbir.

She doesn’t want the house to lose the peace. Mitali wants to have good food after a long time. She asks Aaliya to let her eat anything she wants. She doesn’t like the food. She asks servant to make healthy food. The servant apologizes to them. Tanu and Aaliya lecture her like the owners of the house. Tanu tells them that they can get their old life back, once Baljeet comes on their side. Tanu tells that Abhi just listens to Baljeet, she shouldn’t get on Pragya’s side. Aaliya tells that Baljeet may unite Abhi and Pragya, they have to keep Abhi in their clutches, else they will lose the lavish comforts.

Tai ji and Mitali agree to help them in the plan. Aaliya tells that Pragya has turned weak because of Gaurav’s case, she will turn strong if she gets Abhi’s support. Mitali doesn’t want to return to the chawl. She asks Tanu and Aaliya to share the plan. Tai ji tells that she has an idea to make Baljeet hate Pragya, Baljeet will make Abhi and Pragya fight. Mitali doesn’t think its so easy. Tai ji tells that she has learnt many politics to divide and rule. Tanu is glad to make her team.

Tanu acts that she is also trying to stop Abhi’s drinking. Pragya warns her to mend her ways. Tanu asks her if she has revived her love for Abhi. Pragya doesn’t want to reply her. Tanu thinks Abhi won’t be able to handle himself without alcohol, Baljeet will let him drink, and then Pragya will fight Baljeet. She wants to see their fight. Siddharth asks Rhea why did she talk to him nicely. She tells that the family was there, she was pretending to be nice to stop them from suspecting them. She doesn’t have a problem with Siddharth.

She tells him that she doesn’t know what’s odd between them. She admits that she really liked it when he left the room, she had her personal space and peace. Siddharth isn’t able to understand what does she want. She gets more clear. She asks him to stay separated. She tells that they aren’t meant for each other, they both need clarity.

Reviewed Rating for Kumkum Bhagya 22nd September 2021 Written Update Pragya warns: 3/5 This rating is solely based on the opinion of the writer. You may post your own take on the show in the comment section below.