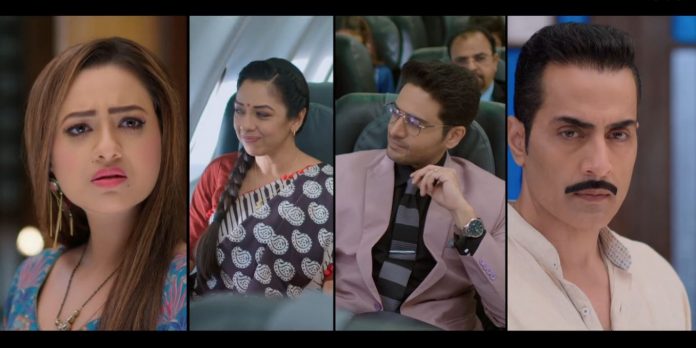 Anupama 27th September 2021 Written Update Beach drama Anuj takes Anupama along for sightseeing. They visit the beach and spend time recalling their teenage years and dreams. Its a new life for Anupama. She has her old friend along. Anuj cares for Anupama. She enjoys her every bit of her Mumbai trip, after fulfilling her first dream of travelling in an airplane. Anuj fulfills her childhood dream. She is thankful to Anuj. Anuj finds her dancing at the seashore, enjoying the cold waters touching her feet. Anupama sees her writing her name on the beach. Anuj turns too inclined towards her. He imagines themselves as a happy couple romancing on the beach. He wishes his dream comes true.

Anupama’s innocence touches Anuj’s heart. Vanraj grows insecure about Anupama and Anuj’s friendship. She asks him if he is worried that Anupama will also walk on their footsteps, if their history will repeat with Anupama and Anuj. He apologizes to Kavya that he isn’t able to cut off his relation with Anupama even if he wants. He tells Kavya that he has an attachment with Anupama, he isn’t able to understand his feelings, though he doesn’t love Anupama.

Vanraj convinces Kavya to accompany him to Mumbai. Kavya gets angry seeing his insecurity. Vanraj and Kavya also reach the same beach following Anuj and Anupama. Vanraj taunts them that they didn’t come for any work, but for sightseeing, they are enjoying their time as anyone can see. Kavya gets upset with his behavior. Anupama doesn’t like Vanraj and Kavya’s drama. Anuj finds Vanraj poking his egoistic nose in between Anupama and him. Kavya asks Vanraj not to ignore her because of Anupama. She scolds him for always being jealous and hurting her heart. Anuj excuses Anupama and himself, from Vanraj’s madness.

Reviewed Rating for Anupama 27th September 2021 Written Update Beach drama: 3/5 This rating is solely based on the opinion of the writer. You may post your own take on the show in the comment section below.