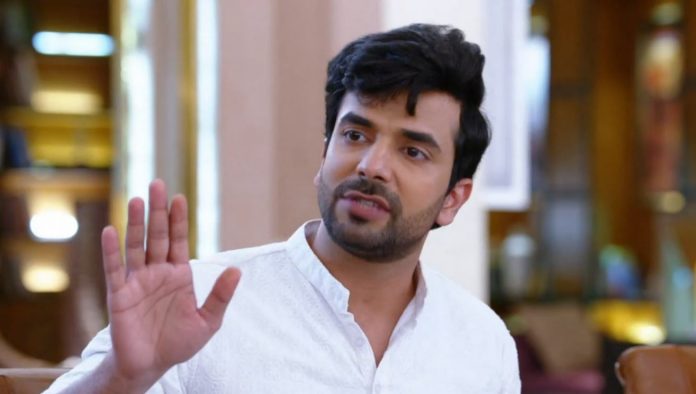 Kundali Bhagya 27th September 2021 Written Update Rishabh alert Karan tells Kritika that Preeta has turned too oversmart. Rishabh takes care of Pihu. He tells that he will give her to Preeta. Sonakshi asks him to handover Pihu to her. He replies that she isn’t well, she can’t handle Pihu. Karan and Preeta fight cutely. Rishabh gives Pihu’s colours to Preeta. Karan complains to the family how Preeta scolded him. Rakhi feels Preeta is right. Karan asks what is his mistake. Mahesh tells that Rakhi also scolds him always.

Rakhi asks Mahesh when did she scold him. He tells that Rakhi was upset when he was going out to party, she loves him a lot, but doesn’t express it right. Rakhi gets annoyed with him. Mahesh tells that Rishabh should teach Karan. Preeta asks Karan to grow up and not upset the family by his complains. Mahesh convinces Rakhi and gets her back. Pihu’s new Nanny comes home. The family introduces themselves. Preeta asks Karan not to tell the family about their fights. He tells that he has exposed her love. She asks him to keep things to themselves.

She understands that he will never change. She feels he is still senseless, its not his attitude, but his foolishness. She calls him totally mad. They find Pihu playing in their room. Karan asks Pihu to go and sleep. Pihu wants to meet Rishabh. She tells that she can go herself. Pihu goes riding a cycle. Karan romances Preeta. They have fun moments. Rishabh checks the office files. He wonders how is it possible. Sherlyn asks him to sleep.

He asks her to give him time. He wants to focus on the business. He tells that someone in the company is breaking them down internally, someone is leaking the information and passing the deals to their rivals. He feels someone is ruining them. Sherlyn knows that Prithvi is behind this. He wants to find out how Karan didn’t observe this. He tells that he will find out the betrayer. Sonakshi misses Karan. She sees Pihu. She offers help. Pihu tells that she can handle herself.

Sonakshi tells Kareena that Pihu was going alone, so she is following her. Kareena calls the Nanny to look after Pihu. Pihu tells that she will go to Rishabh’s room. Sonakshi knows that Kareena and entire family like her soon. She wants the family to hate Preeta. She tries to show how irresponsible is Preeta to leave Pihu alone. Shrishti is worried that Sarla wants to get her married. She calls Sameer to give the shocking news. She tells him that Sarla wants to get her married, she spoke to the matchmaker as well.

Sameer asks how is it possible. She adds that Sarla is praying for her marriage. Sameer understands she is tensed. She tells him that she doesn’t want to marry anyone. Sameer asks her if she has someone else in her heart. She asks him if he doesn’t know it. He tells that he knows but maybe he doesn’t know. Sarla comes there to talk to Shrishti. Sameer doesn’t want Shrishti to marry anyone. He gets worried. Sherlyn isn’t habitual to see anyone in her room. She feels Rishabh is a trouble. Pihu visits Rishabh to tell him a secret.

Rishabh tells that they won’t tell their secret to anyone. Sherlyn thinks Pihu is becoming smart like Preeta. Pihu tells that she likes Rishabh a lot. Sherlyn asks Pihu to sleep with them tonight. Nanny Vinita informs Karan and Preeta that Pihu would be sleeping in Rishabh’s room. Preeta wonders if Pihu will get a sleep. Karan asks Preeta not to overthink and sleep. Rishabh and Sherlyn put Pihu to sleep. Preeta stays restless in her room. Pihu doesn’t sleep. She wants to go to Preeta. Sherlyn allows her to leave. Pihu comes back to Preeta.

Preeta is happy to see Pihu. Preeta and Pihu have a peaceful sleep. Sarla asks Shrishti to tell her if she has anything in her heart. Shrishti asks why does she want to get her married so soon. She asks if she troubles Sarla so much. Sarla tells that Shrishti doesn’t trouble anyone, but she needs to settle down. She wishes Shrishti to have a strong relation with her life partner. Shrishti gets emotional.

Reviewed Rating for Kundali Bhagya 27th September 2021 Written Update Rishabh alert: 3/5 This rating is solely based on the opinion of the writer. You may post your own take on the show in the comment section below.