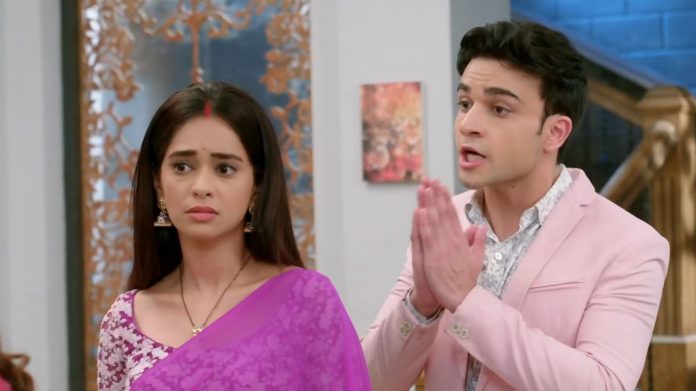 Kumkum Bhagya 29th September 2021 Written Update Rhea exposed Rhea loses her cool when she spots Abhi driving away with Pragya. She gets too disturbed that Pragya is making him work as a servant. She is more raged when she learns from Aaliya that Pragya had tried to kill Abhi. She can’t let Pragya win this time. She tells Aaliya that she will go home and lash out at Prachi. She asks Aaliya to handle Pragya. Rhea reaches home. She gets furious on Prachi in front of Ranbir. She angrily accuses Prachi. She tells that Prachi has stolen her love and her dad as well.

She tells that Prachi has stolen Ranbir and Pragya has stolen Abhi from her. Prachi defends Pragya. Prachi can’t believe Rhea’s words. She tells Rhea that she will end her ties with her. Ranbir supports Prachi. He tells Rhea that he really hates her, because she didn’t change till now, he doesn’t want to see her face again. Rhea is left in ears after they walk away. On the other hand, Baljeet speaks to Pragya about Abhi. She tells that she is aware of Abhi’s drinking habit, its wrong and unhealthy for him, but she can’t see Abhi in pain.

She begs Pragya not to stop Abhi from drinking, when he falls so helpless and pitiable. She is also helpless for his sake. Pragya asks her not to support Abhi ever. Baljeet tells that she can’t promise her anything, because she wants Abhi’s happiness. She apologizes to Pragya. Will Rhea really lose Ranbir by showing her true face, or is the anger-vent out just her dream? What will happen next? Keep reading for a full update.

Ranbir plays a cards game with Dida. He wants Prachi to tell I love you to him in front of everyone. Prachi pinches him. He tells that Prachi doesn’t love him. Dida teases Prachi about Ranbir. Dida tells that love makes a person lie a lot. Ranbir and Prachi exchange stares. Dida asks Prachi to always keep the love true. Ranbir messages Prachi. He asks her to tell I love you to him. He gets nervous seeing Pallavi. He goes to attend a call. Prachi gets his message. She gets nervous. Ranbir follows Prachi to the kitchen. He acts upset with her.

Abhi argues with Pragya knowing she dislikes his drinking, just to oppose him. He tells that he likes to drink more since the time he came to stay in her house, he loves to see the anger on her face. She tells that he won’t get any alcohol in the house. He shows her the bottle and disappoints her. Pragya asks Tanu why did she give the alcohol to Abhi. Tanu tells that she didn’t give it, she isn’t Abhi’s enemy. Baljeet tells that she has given him the alcohol, after pitying his state. Pragya tells that alcohol is poison for him, he needs them and their care. Abhi tells that Baljeet cares for him more than anyone else.

Tanu blames Pragya for his condition. Abhi tells that he is ready to get burnt in the fire, just to burn Pragya. Pragya rushes to find a way to stop him. Aaliya knows Pragya is quite stubborn. Pragya meets Abhi to explain her point. He refuses to quit drinking. She tells that she will leave the house if he drinks. He tells that its her house. She asks him to choose between alcohol or her. He tells that he won’t leave alcohol even for her sake, he is really sorry. Tanu laughs hearing the expected answer from him. She apologizes for overhearing their conversation.

She tells that Pragya’s sweet tactics won’t help him, Abhi doesn’t love her now. Abhi thanks Tanu for giving the information on his behalf. He asks her not to become a translator. Pragya asks Tanu not to interfere between them and just leave. Abhi shuts the door on Tanu’s face. Abhi and Pragya get into a cute argument like the old times. He asks her why did she make Tanu away. She tells that she won’t come to the room if he drinks. She asks him to think if she will stay on the road and fall in big troubles. He knows that she can handle things on her own. He tells that its her decision, he will sit in the room and drink, he is a king, not her slave.

Pragya tells that she is really going, she may fall in trouble if any eve-teaser comes there. Abhi asks her to go. She fails to blackmail him. Tanu tells Aaliya that Pragya doesn’t know that Abhi has changed, he doesn’t care for Pragya now, he won’t cry for her, he is happy drinking. Mitali tells that Pragya is a big fool, she left the house and Abhi didn’t leave the alcohol. Aaliya is happy that Abhi doesn’t care for Pragya even a bit. Mitali tells that she has overheard Abhi and Pragya’s arguments. Tanu tells that they will add the fuel in Abhi and Pragya’s fight. Keep reading.

Reviewed Rating for Kumkum Bhagya 29th September 2021 Written Update Rhea exposed: 3/5 This rating is solely based on the opinion of the writer. You may post your own take on the show in the comment section below.