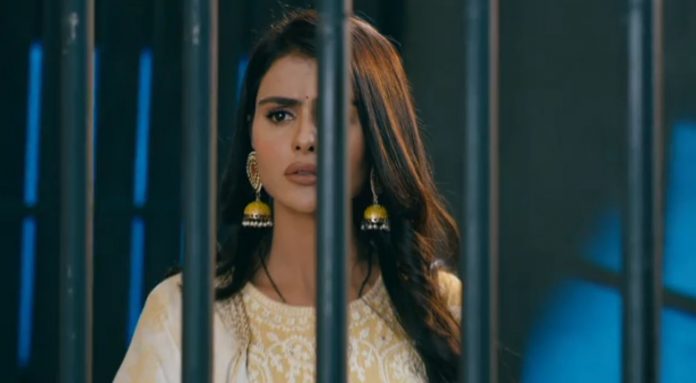 Udaariyaan 29th September 2021 Written Update Tejo promise Fateh and Tejo’s protective side towards each other is something worth something. Fateh and Tejo fail to introduce themselves with the true identities. They get arrested for getting involved in a wrong racket. Fateh isn’t worried for himself or his career, but his dad’s name and respect. The police partly believes that Fateh and Tejo are husband and life. When the lockups doesn’t have much space, they put Fateh and Tejo into the same lockup. Tejo didn’t wish Fateh to put himself in the trouble.

Fateh doesn’t want the police to stain his name by getting him involved in a wrong case. Tejo wants some help to reach them, without letting the family know about it. Jasmin turns up to help them but isn’t sure which way to take to free up Fateh from the police station. She doesn’t think of Tejo even once. She just thinks of Fateh. She is insecure seeing Fateh with Tejo. She doesn’t want them to stay together. She lies to the police that Fateh is her husband. This causes more troubles for Fateh and Tejo. Fateh tells the police that Tejo is his wife.

He asks Tejo to undo the complications in his life, by divorcing him when there is nothing left between them. Tejo tells Fateh that she decided to divorce her. She adds that she will tell Khushbeer that she wants to move on. She wants to simplify his life. Fateh believes her. Fateh finds his old friend Tejo back.

Tejo is unsure of his feelings, after witnessing his love once again when he protected her from the police. She wants Fateh to decide for his life himself. She wants to end the problems for Virk family as well. He feels at peace when she assures to fix everything in his life, because she also can’t see him struggling away from the family. Jasmin fails to help them. Fateh and Tejo get helpless to spend the night in the police lockup. Fateh rests on Tejo’s shoulder and falls asleep. Their friendship gets revived again and the trust too. Fateh gets grateful to her. Should Fateh and Tejo give their marriage a chance? Comment your views and keep reading.

The police drops a drunkard in the cell. Constable troubles Fateh and asks him to fight with the drunkard to spend the night in the cell. Tejo gets disturbed. Fateh tells that he left the house because of her, its her mistake. She tells that he always blames her for everything. She tells that she caught him having an affair with her sister, its her mistake that her marriage broke. She accuses him. He tells that its her mistake to call off the divorce by tearing the papers. She asks him to keep his mouth shut and not argue. They both argue, while Jasmin reaches there to claim that Fateh is her husband. Inspector tells that Fateh has two girls in his lives, he already has his wife with him.

He laughs on Fateh’s character. Jasmin requests him to free Fateh, who is a good person. Inspector meets Fateh to question him about his wife. Fateh tells that Tejo is his only wife. Jasmin’s claim fails by Fateh’s statement. Inspector doesn’t let Jasmin meet Fateh and Tejo. Jasmin runs away from the police station when she fails. She doesn’t want Fateh and Tejo to stay in the lockup. She thinks to call Khushbeer and get his help, but she is scared of his anger. Fateh cares for Tejo. The drunkard asks Fateh and Tejo to dance with him. Fateh threatens him.

The drunkard is a troubled man abandoned by his wife. He dances with Fateh, which makes Tejo laugh. Fateh and Tejo learn his sad story. They also grow sad seeing his state. Tejo tells Fateh that nobody can imagine the other person’s pain when the person gets cheated by a life partner. She tells that she has the same pain of disloyalty from her husband. She didn’t know that she will be spending the night with Fateh in the jail. She reminds him their nightout, where they had consummated their marriage by their mutual will.

Fateh tells her that Jasmin didn’t return in his life at that time, he didn’t wish to hurt her. She tells that Jasmin was in his heart, he had used her just to balance himself in the bad phase, he killed their beautiful relation by giving her much hopes. She tells that their relation is dead now, since it was based on a lie. She adds that she will be giving him the divorce, she won’t stop him from marrying Jasmin. He asks her to move on, because he isn’t happy seeing her in pain. He shows his concern as a friend.

Jasmin calls Amrik to take his help. Amrik reaches the police station. He tells her that he just came for Tejo, not for Jasmin or Fateh. She bears his attitude. Inspector asks Jasmin if she got her second husband along. Amrik tells that he has come to meet Tejo and Fateh, they are husband and wife. Inspector asks him to leave. Amrik is worried for Tejo, which upsets Jasmin. Fateh asks Tejo to take rest. Tejo tells that Gurpreet would be in pain because of him. She asks him to meet Gurpreet once. He refuses. Jasmin apologizes to Amrik for using their friendship. Amrik feels he was wrong to befriend a wrong person. He reprimands her for cheating her own sister by having an affair with Fateh.

Fateh is rigid that he will go home only with Jasmin, which is possible when Tejo leaves the house. Tejo tells that Khushbeer won’t let her go anywhere from the house. He tells that once they get divorced, Khushbeer won’t have a right to stop her. Fateh and Tejo sit to take some rest. Fateh sleeps on her shoulder, finding peace as always. Tejo gets reluctant. On waking up, Fateh realizes her hesitance and gets away from her. Tejo feels really sorry for him. She asks him to come back home, she will sign the divorce papers, he won’t have anything to worry. She wants him to trust her, she will make everything okay.

Amrik and Jasmin stay outside the police station at night. Amrik meets the Inspector and asks them to free Fateh and Tejo, they are husband and wife. Inspector questions about Jasmin’s statement. Amrik tells that Jasmin is Tejo’s sister, she told that in tension. He shows the proof of Fateh and Tejo’s marriage. He requests the police to free them. Fateh and Tejo get freed. They thank Amrik. Jasmin hugs Fateh. She tells him that she was too worried for him. Sweety comes to help Jasmin.

Jasmin tells Fateh that they will be taking Sweety’s help to get a decent shelter. Fateh tells that he will go home. Jasmin asks him why is he brainwashed by Tejo. Amrik asks them to come home, Gurpreet is really unwell. Fateh asks Jasmin not to get adamant. She doesn’t care for Gurpreet. She refuses to go and let Fateh go until Tejo is with him. She decides to go with Sweety. Fateh tells that Tejo is ready to divorce him. Stay tuned.

Reviewed Rating for Udaariyaan 29th September 2021 Written Update Tejo promise: 3/5 This rating is solely based on the opinion of the writer. You may post your own take on the show in the comment section below.