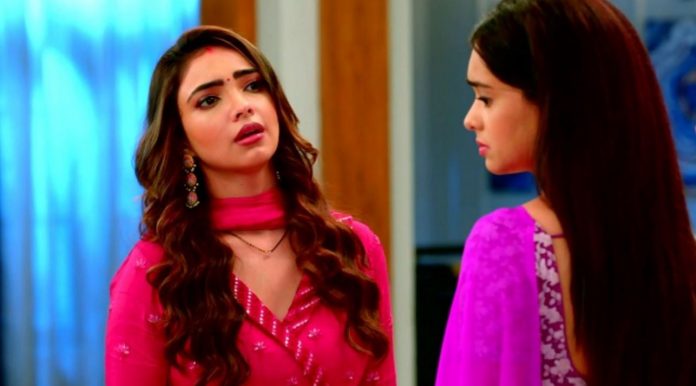 Kumkum Bhagya 30th September 2021 Written Update Prachi rages Rhea bursts out her anger on Prachi. She regrets that Prachi that stolen her love, Ranbir from her, while Pragya has stolen Abhi from her. She feels terrible that Pragya has made her away from Abhi, her beloved dad. Rhea cries for Abhi. The entire frustration gets vented out on Prachi, who didn’t imagine that Rhea is still the stubborn and insensible girl like before. Ranbir too is shocked to see Rhea’s anger throwout on poor Prachi.

He knows Prachi is innocent, she didn’t do anything to break her parents apart. He defends Prachi in front of Rhea, which further angers the later. Rhea tells Prachi that she hates her. Prachi also develops hatred as an answer to Rhea. She tells that she will break all their blood ties because of her evil mindset. Ranbir tells Rhea that he really hates her, he doesn’t want to see her ever again. Rhea breaks down that Ranbir had ousted her from his life again.

On the other hand, Abhi doesn’t quit drinking. He asks Pragya to leave the house and go on the roads if she wants, but he won’t leave his drinks. Pragya makes him aware of the dangers on the road that a pretty woman can face. He tells that he knows she is enough to tackle anything. Pragya really gets attacked by some roadside goons. She prepares to fight them, but Abhi makes a heroic entry to bash up the goons. Abhi and Pragya fight the goons together like they have done all the time. Pragya wants to convince him to quit drinking for her sake.

Pragya waits for Abhi to come and take her home. She thinks he didn’t come to find her by leaving the drinks. She gets upset. Abhi looks for the alcohol bottle cap. He thinks Pragya has come back soon. Baljeet asks him about Pragya. He tells that Pragya is coming. She tells that she did wrong to give him money to drink alcohol. He knows that Pragya has fed her words in Baljeet’s mind. She asks him not to be mad, he loved Pragya and still loves her, he can never deny the love. He tells that he doesn’t love Pragya. She asks about Pragya. He lies that she is taking a bath. She asks is she taking a bath at night. He tells that she wants to stay fair and went for a bath.

She tells that she wants to talk to Pragya. He asks her to go and sleep. He thinks Pragya didn’t come till now. He decides to go out and check, if Pragya realized her mistake or not. Tanu gets decked up in a new avatar for Abhi’s sake. She wants Abhi to realize that she is the best, she always stayed by him, she is still standing by him, she will never leave him. Aaliya asks her the reason to look attractive. She tells that she has to look good to Abhi. She is proud of her looks. Aaliya asks if she still loves Abhi.

Tanu doesn’t think Aaliya will understand. Even she doesn’t know if she loves Abhi. She tells that Abhi will always be of her. Aaliya hides a file from her. Tanu questions her, but doesn’t get any answer. She goes to charm Abhi. Two guys get drunk and wander on the road. They see Pragya and tease her. Pragya lectures them for their eve-teasing. The guy tells that he wants to marry her. She gets at the gunpoint. Pragya asks them to leave her. Abhi reaches there to teach a lesson to the guys. He tells that he didn’t come to take anything, but to give them few punches. Pragya asks Abhi to go away, she will handle them.

Abhi jokes on the guys and insults them. He tells that his anger will break them down. Pragya complains about Abhi’s drinking. They both start arguing in front of the guys. Abhi refuses to quit drinking. Abhi tells that Pragya is his wife. The guy tells that he wants to marry her. Abhi congratulates him and tells that he will not help her. She asks him to save her, she will thank him. Abhi asks the guys to leave Pragya, and take the alcohol instead. Abhi snatches their gun and scare them. The guys laugh and tell that the gun has no bullets.

The guys call their friends to make a team and take revenge on Abhi for the insult. They attack Abhi. Abhi fights them. He asks Pragya to just run away. When Abhi gets caught by the goons, Pragya angrily beats the goon to punish him for hurting Abhi. Abhi asks her to spare the guy’s life. Abhi takes his alcohol bottle back from the guy. Rhea feels disturbed seeing Prachi with Ranbir. She feels she has lost Dida and Vikram’s support. She asks Prachi why did she come in her life.

Vikram asks her to talk to them calmly. Rhea tells that everyone knows how things went wrong. She lectures Vikram and questions him for breaking his friendship with Abhi. Vikram tells that it was just because of business. She asks him to know the truth. Vikram tells that Prachi is the reason, who had snatched Ranbir from them. He tells that Abhi and he had problems because of Prachi and Ranbir’s marriage. Pallavi tells that she can also tell the truth to her. She adds that they wanted to make her their bahu, but Pragya got Prachi married to Ranbir, they felt betrayed by Pragya. She tells that Ranbir would be loving Prachi, it doesn’t mean that they will get her married to anyone, they wanted just Rhea as their bahu. Prachi and Ranbir are stunned hearing the talks against them. Stay tuned.

Reviewed Rating for Kumkum Bhagya 30th September 2021 Written Update Prachi rages: 5/5 This rating is solely based on the opinion of the writer. You may post your own take on the show in the comment section below.