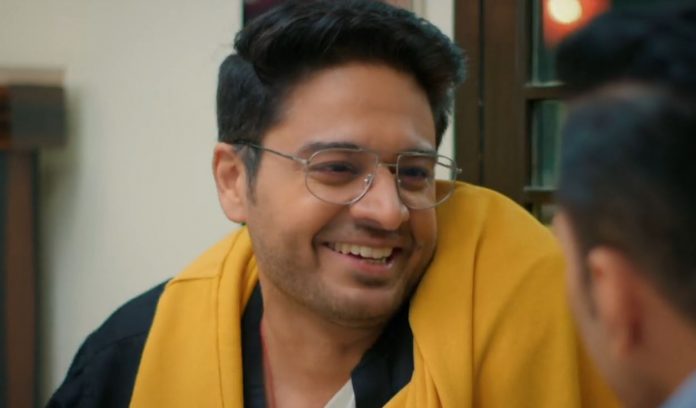 Anupama 30th September 2021 Spoiler Update Anuj’s confession Anuj and Vanraj fighting over Anupama. Anuj asks Vanraj how dare he talk nonsense about him and Anupama. Vanraj replies to him saying that he must have something for Anupama, that’s why he is so kind towards her. Kavya and Anupama try to stop both of them. All this comes out to be Kavya’s dream. She requests God to fulfill all her dreams but not this one. On the other side, a crying Nandini shares her fear about Rohan’s antics with Kinjal. She tells Kinjal that Rohan would not have harassed her if Samar was present at home. Nandini hugs Kinjal and says to her that she does want to lose Samar. She also says that she too doesn’t want to hurt elders.

Nandini asks Kinjal how to handle Rohan as he is not willing to let her go, even after she is trying to ignore him. Nandini wishes that Anupama was with her at present. Kinjal tries to comfort her saying that she and Toshu will handle Rohan. She also says that they will find some solution. Nandini asks Kinjal how they will stop Rohan’s evil ideas which he may execute behind their back.

In Mumbai, Anupama and Kavya worry thinking about Anuj and Vanraj’s whereabouts and what they may be doing alone. Back at Shah house, Baa thinks that it’s good Vanraj and Kavya went to keep eye on Anuj and Anupama. She almost reaches Nandini and Rohan’s photos but Kinjal stops her by switching off the lights. She thanks God and wish Anupama come soon and help Nandini with Rohan’s issue.

Kavya and Anupama get shocked seeing Vanraj and Anuj dance on the Disc floor. They think they are dreaming. They realize that both Anuj and Vanraj are behaving weird because of being drunk. Kavya says Vanraj and Anuj may break their bones dancing like this. Unaware of everything both men dance with other females present on the scene. Kavya feels jealous, Vanraj apologizes to her and calls her for dance. Both men get wilder and dance like teenagers.

They open their upper body clothes embarrassing Anupama and Kavya. Both Kavya and Anupama take Vanraj and Anuj outside the disc. Vanraj and Anuj in their drunken state behave like brothers and best friends. Kavya says to Anupama that she feels like recording Vanraj’s drunken behavior and shows it to him after getting sobered. She wonders why men behave like this after getting drunk.

Vanraj and Anuj fight to open the lift first. Kavya and Anupama laugh seeing Vanraj and Anuj’s funny behavior. They try to silence Anuj and Vanraj as they are disturbing hotel guests. Kavya asks Anupama to bring curd from the restaurant and tell that she will book a room for her and Vanraj. Anupama worries for Vanraj and Anuj. Kavya tells her that they will have to sit quietly being best friends. They scold both men and ask them to wait for them sitting quietly.

Anupama and Kavya go to their individual work. Behind their backs, Anuj confesses that he loves Anupama. This shocks Vanraj. He asked Anuj what he said. Anuj again confesses his feelings for Anupama. Drunk Vanraj asks if he loves Anupama. Anuj reminds Vanraj that Kavya is his wife not Anupama. Vanraj and Anuj repeat their talks. He asks Anuj when did he fall for Anupama. Anuj answers Vanraj that he loved Anupama since 26 years. He tells Vanraj that he never forgot Anupama. He also taunt Vanraj saying that he never understood Anupama. Vanraj ask Anuj he didn’t forgot Anupama even after he was far away from Anupama. Anuj answers in Shayari. Vanraj praise Anuj and ask him to speak a shayari. He ask Anuj why he didn’t fell for Anupama in 25 years of their marriage. Anuj too asks him the same thing.

Vanraj describes his married life with Anuj and thinks why he didn’t fall for Anupama. Anuj asks Vanraj the same question. They laugh in their drunken state. Vanraj says it was not love but something which is still stuck. Anuj replies he knows about it and has no problem. Vanraj wonders why he has a problem being away from Anupama. Anupama worries for both men and thinks what all she is seeing in a little bit of time after arriving in Mumbai.

Vanraj asks Anuj why he didn’t confess his feelings to Anupama before his and Anupama’s marriage. In the drunken state only, Anuj starts telling him that he left behind and Vanraj married Anupama. In the coming episode, Baa will try calling Anupama. She gets angry and says why is Anupama not receiving her call. Rakhi Dave will reach Shah house and increase Baa’s anger saying that decent people become modern after leaving for town. On the other hand, Anupama will try to handle and sober drunk Anuj. Next morning Vanraj will anger Anupama and Anuj by taunting them and saying that they would have a better night if he would not have interrupted them with Kavya.

Reviewed Rating for Anupama 30th September 2021 Spoiler Update Anuj’s confession: 5/5 This rating is solely based on the opinion of the writer. You may post your own take on the show in the comment section below.