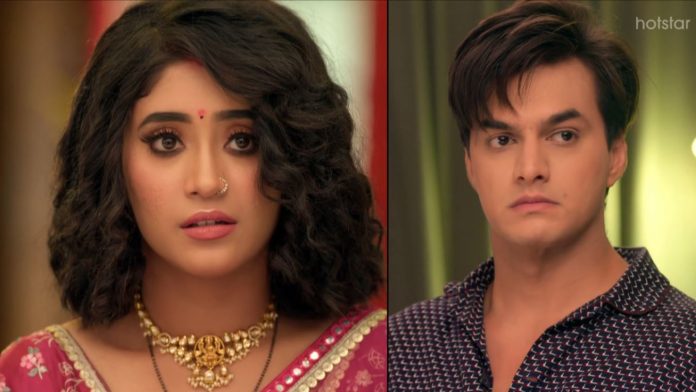 YRKKH Upcoming major leap 30th September 2021 Spoiler Yeh Rishta Kya Kehlata Hai 30th September 2021 Written Update Arohi’s Annaprashana ceremony Sirat says to Kartik that the love between their three kids should always remain constant. Kartik assures her that it will and she should not keep any doubt. Kartik’s phone rings and all the three kids start crying. Sirat and Kartik go to attend to the babies. Kairav comes into their room and insists on playing with his sisters. Kairav stops them from crying and both the girls become silent. Kartik says that it is time for a selfie as both the girls are in a good mood now.

Kairav shouts loudly but Kartik advises him to lower his voice or the girls might start crying again. The Goenka family is preparing food for the Annaprashana ceremony of Arohi. Dadi appreciates Sirat for becoming responsible and taking good care of the girls. These actions of Sirat have made the baby girl healthy and good. Surekha tries to put Sirat down but Dadi shuts her up. Dadi makes Surekha remember her old days when she was not able to take good care of her kids Luv and Kush. The children were majorly taken care of by Suwarna. Dadi says that it is not the case for Sirat. She is able to take care of all three kids properly and she will not leave any stones unturned for the Annaprashana of Arohi.

Sirat makes her babies ready for the ceremony and applies black tikka on them so that they are protected from evil eyes. Arohi starts crying and Sirat applies black tikka on her too. Sirat tells her babies that she has ordered nice outfits for her lovely daughters. Sirat prays to god that both her daughters stay together with love always. Kairav comes running and informs Sirat that Sheetal’s boxing match is going to air on the tv. Kairav and Sirat start watching the match. Sirat is not happy with Sheetal’s game and gets angry that whatever she has taught her has been forgotten in the ring by Sheetal.

Sheetal loses the match. Sirat is super angry and starts showing how she would have knocked the opponent and hurts Kartik instead. Kairav laughs seeing this and runs away when Kartik asks him who he is laughing at. Sirat apologizes to Kartik. Kartik says that next time while coming to his own room he will play trumpets and come. Sirat tells him to wear a helmet too for the next time. Kartik advises Sirat that it has been a long time she should give a try to boxing again.

Sirat says that her daughters are very small and she cannot take it up now. Kartik assures her that he will take care of the girls and encourages her to go for it. Sirat remembers that she has to make Kheer and goes running. Kartik tells his daughters to make him proud. Suwarna appreciates Sirat for making Kheer in a very short time. Dadi tells Suwarna and Surekha to arrange for the things properly so that after Pandit comes they can go ahead with the ceremony.

Sirat’s boxing teammates come to visit her and inform her that Sheetal is very disturbed after losing the match. They ask Sirat to come back to the Boxing ring as the Boxing champion tournament will be happening soon. Sirat is in two minds but asks the guests to meet her daughters. The girls insist Sirat to apply as it is not a regular championship but an Asian championship. They urge her that such events do not occur regularly and she should definitely go for it. Kartik asks Sirat about the boxing match but she tells him that right now all her focus is on her daughters. Kairav insists on feeding Arohi first and Sirat says that he has the right to his sister just like her and Kartik.

Kartik suggests that he and Kairav together feed Arohi. Sirat insists on feeding Akshu as she was the one who gave her the joy of becoming a mother for the first time. Kartik says that it is the responsibility of the whole family to take care of both the daughters and not differentiate between the two. Kairav keeps boxing gloves and phone on Arohi’s plate to choose from as it determines what she might take as a profession ahead. Arohi chooses a book, pen, and cash. Kartik says that she is smart and chose education and money. Sirat insists on doing the ceremony for Akshu too as she was not present at that time.

Akshu chooses radio. Kairav says that both his sisters have different personalities and whatever they decide he will always support them. Sirat becomes emotional seeing the number of gifts her daughter got which she didn’t get in her childhood. Kartik says that their daughter will fulfill all of her mother’s wishes and desires. Kartik gives a form of Boxing Asian Championship to Sirat. He insists on filling the form as it is a good chance to venture after a long time. Sirat is not too keen but Kartik makes her understand that she should not sacrifice her dreams. Trapped between motherhood and ambitions, how will Sirat manage both? Keep reading.

Reviewed Rating for YRKKH Upcoming major leap 30th September 2021 Spoiler: 5/5 This rating is solely based on the opinion of the writer. You may post your own take on the show in the comment section below.