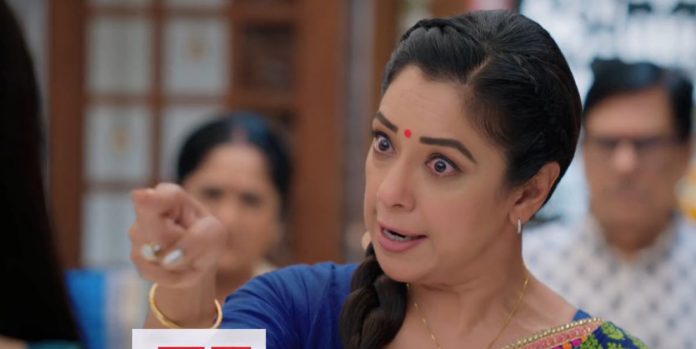 Anupama 2nd October 2021 Written Update Best rage Anuj wishes that he was married to Anupama. He regrets that he couldn’t reach Anupama with his love on time. He is very thoughtful about Anupama. His love for Anupama stayed intact for 26 long years because of his golden heart. Anuj has his heart filled with love and respect for Anupama. He thinks he can never forget her. He gets close to confess his feelings to Anupama. He doesn’t tell her by the fear of losing her as a friend. He feels that his fate has turned good that he is able to be with Anupama.

Anupama doesn’t bear the nonsense from Vanraj. Anuj and Vanraj’s memory of the last night conversation gets wiped off. Vanraj doesn’t remember anything either, but doesn’t stop himself from taunting Anuj and Anupama. He gets demeaning once again. His vile words hurts Anupama’s heart. She knows how dirty minded he is. Anupama reveals how badly Vanraj treated her. Anuj is shocked to realize how much Anupama has suffered in her life because of Vanraj. He knows that Vanraj never valued her. She warns Vanraj to stay away from her professional world.

Rakhi refuses to leave the house until Leela talks to Vanraj and Anupama. She tells that she owns the house, she will not leave. Rakhi bothers Leela by her antics. She takes Leela’s pearl necklace and disobeys Leela, who asks her to return the necklace. Rakhi breaks the necklace, shocking Leela. She insults Leela and Hasmukh. Kinjal gets upset watching her mom’s non-resting ways. Vanraj and Anupama return home, only to find Leela and Hasmukh’s humiliation carried on by Rakhi. Vanraj limits Rakhi from breaking his family peace.

Rakhi asks him not to show her the attitude and instead return her money. Vanraj doesn’t have the money to give to Rakhi. Anupama has the cheque given by Anuj. She gives the same cheque to Rakhi, and asks her to get lost. She declares that Rakhi and Kinjal’s ties will end. She adds that Rakhi should never come to meet Kinjal, and Kinjal will never visit Rakhi. She asks Rakhi to never show up at their house. She throws away Rakhi’s name board and hands it over to her. Anupama angrily insults Rakhi and shows her the door. Vanraj shuts the door on Rakhi’s face. Rakhi fumes on her insult. She didn’t know Anupama will arrange money and slap it on her face. What will Rakhi do to insult Anupama? Keep reading.

Anupama apologizes to Anuj. He tells that he is okay, he is just worried for her. She tells that she s habitual to Vanraj’s taunts. He clarifies that he didn’t spike the drink. She asks him not to clarify, she understands him, he would not get drunk. He asks Anupama to forgive him if he has misbehaved in the drunken state. She tells that he respects her from his heart, he didn’t misbehave or say anything wrong. She adds that one who wants to misbehave by his heart, misbehaves in the drunken state. She shows her trust on him. He thanks her. Leela asks Rakhi not to sit on the swing, but Rakhi does just the same.

Leela keeps warning her. Rakhi disobeys her and just says sorry. She provokes Leela’s anger and enjoys. Anupama is worried on checking Leela’s missed calls. Vanraj tells her that nothing is okay at home, he spoke to Leela, Rakhi has come home to take 20 lakhs from them, Rakhi has no principles at all. She asks how can she ask like this, when Kinjal had convinced her. He adds that Kavya won’t work with Anuj, Kavya will find another job and work. He asks her to ask Anuj for her tickets and just come home along with him.

He tells that if she just focusses on her work, then the family will be lost. Kinjal asks Rakhi why did she come to ask for money, after the deal. Rakhi sings a song to crack a joke. She tells that she wants her money back, Anupama didn’t sign a contract, it was just a verbal contract. She rebukes Kinjal for stealing the cheque by fooling her. Kinjal asks her not to break her house.

Rakhi adds that Kinjal is becoming cunning like Anupama. She shows the nameplate she had made to fix outside the house permanently. Rakhi breaks Leela’s necklace and apologizes. Leela tells that the necklace belongs to her mother. She picks the pearls from the ground. Vanraj and Anupama make an entry when they find the entire family including their old parents picking the pearls from the ground. They rush to help Leela and Hasmukh. Rakhi enjoys their drama. She doesn’t move seeing them. She asks Vanraj if he is back to the old wife. She enquires about Kavya. Vanraj speaks to her as Leela’s son.

He confronts her for insulting his parents. Vanraj and Rakhi get into a loud argument. He tells that she will get the cheque once the factory deal is sealed. Rakhi tells that she can’t wait further. She adds that she will fix her new nameplate outside the house, for him to remember it always. She asks him if he is ashamed to call her a relative, then call her a house owner. She declares that its her house as well, because they share the ownership. Anupama shuts up her mouth by handing over the cheque to her. Vanraj and the family are surprised to see the cheque. Vanraj finds the cheque given by Anuj.

Anupama tells that its 20 lakhs and now the loan is paid. She asks Rakhi to stop insulting them and leave. She feels sorry that Rakhi can’t taunt anyone now as she would have planned before coming. She asks Rakhi to throw the nameplate in the trash. Vanraj realizes that Anupama didn’t tell him about the cheque before, just to become a heroine at home. Rakhi taunts Anupama on her friendship with Anuj. Anupama knows that Rakhi has no relation with humanity and any personal bonds, she just wants the money.

She asks Rakhi to get up from Leela’s swing. Rakhi regrets to help Anupama. Anupama goes on insulting Rakhi as a reply to Rakhi’s misdeeds. She tells that she took Rakhi’s help, but Rakhi has kept a deal. She adds that she will never come to ask Rakhi for help. Rakhi connects her with Anuj and passes taunts. Vanraj gets angry on Rakhi. Anupama wants Rakhi to leave. She tells that she will change her nature now, she will not forgive Rakhi this time, she can’t tolerate Rakhi’s misbehavior, seeing how Rakhi has insulted Leela and Hasmukh. She declares that she will not respect Rakhi from now. She cuts off Rakhi and Kinjal’s relation. Vanraj and Leela agree with Anupama.

Rakhi falls on the ground by stepping on the pearls. She faces the same insult. Anupama purifies the swing for Leela’s sake. Rakhi spills poison before leaving. She tells that Anuj’s heart has won Anupama, while Anuj’s richness has won Vanraj. She wants Vanraj to get against Anupama. She swears to take revenge on Anupama very soon. Anuj feels its his mistake, he never confessed his feelings to Anupama, and it resulted her life in such a suffering. He tells that Anupama is a queen, who deserves a fairy tale life. What will Anuj do to rectify his realized mistake? Keep reading.

Reviewed Rating for Anupama 2nd October 2021 Written Update Best rage: 2/5 This rating is solely based on the opinion of the writer. You may post your own take on the show in the comment section below.