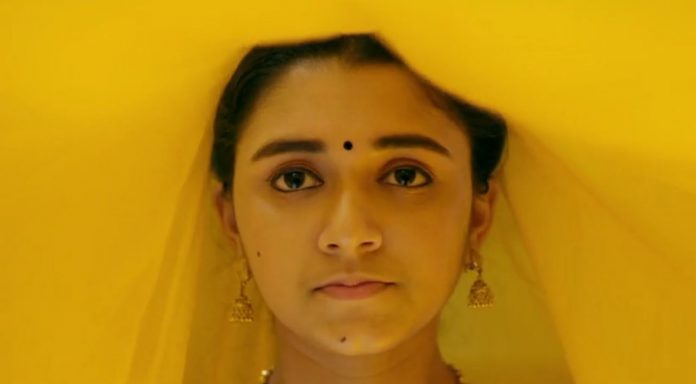 Barrister Babu 1st October 2021 Written Update Tapur in court Bondita doesn’t want anything to go wrong during the case hearing. Bondita asks Tapur to get ready on time and accompany her to the court. She asks Tapur to keep this a secret, nobody should know about them going to the court. She wants Tapur to tell the truth in the court and prove Anirudh innocent. Tapur promises her that she will give the testimony in Anirudh’s favor and prove him innocent. She tells that she will not break her promise. She also wants to support Anirudh and save Bondita’s happiness.

Bondita brings Tapur to the court, and declares that she will be proving Anirudh innocent by presenting the evidence. She appears very confident. She calls the witness to give a statement in Anirudh’s favor and prove that whatever he did was in defense of a crime. She tells that the truth will prove why Anirudh was silent till now. She calls Tapur there along with few girls, all dressed up the same way and covering their faces behind the veil.

Binoy is not allowed to have sweets because doctors have not given him permission. He creates a drama and starts throwing things. Bondita comes and assures him that Anirudh will be in front of him tomorrow till then he has to control his cravings. Binoy says he believes Bondita and goes in his room. Trilochan says to Bondita that she managed to convince Binoy but she cannot convince him. Bondita promises Trilochan that Anirudh will be free the next day. Bondita is about to reveal Trilochan about Anirudh’s innocence when she looks at Thakumaa and Tapur and they indicate not to reveal anything.

Bondita remembers her promise to Thakumaa and refuses to tell Trilochan about it. Bondita asks Trilochan if he trusts her to which Trilochan replies that he has full faith on Bondita. Bondita reveals that she has a very strong proof to save Anirudh from the death sentence and asks Trilochan for his blessings. Trilochan blesses her. Bondita studies the case till late in the night and Anirudh is depressed in jail. Tapur brings coffee for Bondita and asks her if she doesn’t get tired of working on the case day and night. Bondita answers that strong coffee and Anirudh’s motivating learning keep reminding her of her goals and relieves her of tiredness.

Bondita informs Tapur that tomorrow they need to go to the court and as she has promised Thakumaa no one should know what they are planning. Tapur promises Bondita that she will remain firm on her words and reveal the whole truth to save Anirudh. Bondita is proud of her little sister Tapur. Bondita sees Tupur taking food late at night for someone and decides to follow her. Tupur goes inside a graveyard and Bondita goes after her. Bondita sees that Tupur has made a scarecrow and considers him as Chandrachur. She gives it food, dresses it up, and talks to it. Bondita realizes that Tupur is in huge trauma and living in a false world.

Tupur falls unconscious and Bondita comes running to her. Bondita becomes emotional and says that she can understand her pain as they both love their husbands dearly but Chandrachur is not a loyal man and he had evil eyes on her and also tried to assault Tapur. Bondita declares that tomorrow Chandrachur’s real face will come in front of everyone in the court.

Bondita further says that she knows that Tupur will be hurt when she realizes her husband’s truth but she has to punish the culprit and spread fear in the minds of the assaulters. Bondita asks for forgiveness from Tupur. The next morning Bondita gets ready to go to the court and Trilochan is loudly reading news about Bondita. He is very happy but when it mentions according to some sources Trilochan gets angry and is confident that Bondita will win.

The radio also covers news about Bondita will win against the much-experienced barrister Subodh or not. Trilochan again gets angry and orders to off the radio. The family members bless Bondita and wish her luck so that she can fulfill her friendship, wifely, and student duties. Bondita seeks blessings from the elders and leaves confidently. Outside the court, reporters gather to cover the historic moment of the first female barrister fighting the case to prove her husband innocent. Subodh says that it won’t be a historic moment but a lot of drama for Bondita as he is Subodh Chatterjee. Anirudh is confident that Bondita will create history and the crowd present there proves it.

The court orders the barristers and only the accused to be present and all others to not enter inside. Trilochan gets angry but Bondita makes him understand that this step is necessary to prove Pati babu innocent. Anirudh understands her actions and congratulates Bondita for this step. Bondita and Anirudh talk with eyes romantically and enter the court. The court starts and Bondita thanks the judge for blocking other people from entering the court on her request. Barrister Subodh interprets in between and says that Bondita is using all these tactics to save her husband for a few more time and he should not fall for it. Bondita says that she is trying to save an innocent victim but this time she wants to present some important witnesses in order to save the accused.

Bondita declares that she will present these witnesses and their statement will prove Anirudh innocent and why he was silent on this matter till now. Bondita seeks permission from the judge to call the witnesses. The permission is granted to Bondita. Several women dressed in same color saris clad in veil enter the court. Barrister Subodh Chatterjee and his assistant are left puzzled. Anirudh feels happy seeing them. Tapur is hiding her face one among them. Anirudh is happy that by this tactic the truth will come out and Tupur’s identity will not be revealed. Subodh insults Bondita and asks her to go to theatre and perform drama as this is a court.

Bondita objects Subodh and requests the judge that her witness is a female and along with her truth her dignity is involved too. Bondita declares that the witness wishes to keep her identity hidden. Subodh says that who cannot show her face how can she be trusted. Bondita says that she will 100% tell the truth because whatever the witness will say the society might speak on her character with no mistake of hers. And that is why the witness has chosen to hide her identity and reveal the truth. Bondita requests the judge that an aim of a courtroom is to bring out the truth and thus she must be allowed to do so.

Subodh once again objects and says that Bondita is presenting stories rather than proofs. He asks her if the witness is only one then why are there 7 women in the court. Bondita reveals that this step is taken to fully cover the identity of the witness. Subodh appeals to the judge that as now only a few people are present inside the witness needs to identify herself or he won’t consider it. Bondita tells Subodh that she doesn’t care if he believes the witness or not as her aim is to convince the judge and not him. The judge gives permission to Bondita that her witness can speak the truth however she wants. Anirudh is happy and wishes Bondita good luck. All the 7 females touch Bhagavad Geeta and promise to speak only the truth in unity. Bondita and Anirudh finally get a ray of hope. Will Bondita’s efforts to prove Anirudh innocent bear fruit? Keep reading.

Reviewed Rating for Barrister Babu 1st October 2021 Written Update Tapur in court: 5/5 This rating is solely based on the opinion of the writer. You may post your own take on the show in the comment section below.