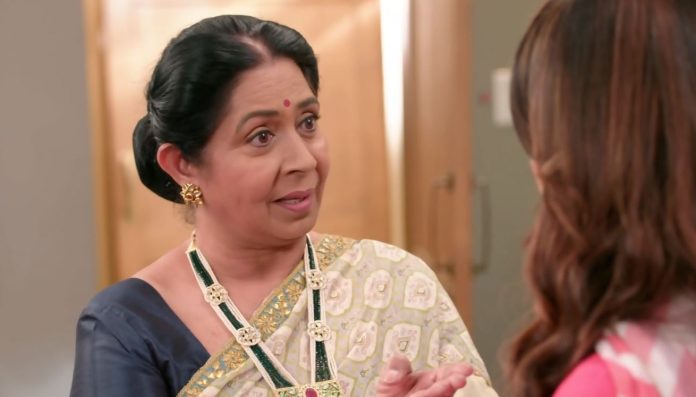 Kumkum Bhagya 5th October 2021 Written Update Dida in danger Rhea plans to go on the Bangalore trip with Abhi. She tells the same to Aaliya. She shares her excitement. She isn’t able to contain her feelings. She wants someone to hear her out. She tells Aaliya hat she has a plan on her mind to fake sickness and get Ranbir close to take care of her, then she will slowly woo him and trap him in her love. She tells that once Ranbir becomes of her, then he will get committed towards her. She has overheard Ranbir telling Prachi that he would be loyal to Prachi until the time he is with her, until she loves him, if anyone comes in his life and takes Prachi’s place, then he will be getting loyal towards the new girl in his life.

While Prachi knew that Ranbir is joking and he can never give his heart to anyone, Rhea believes that he will indeed become of her once she wins him, because he is a one-woman man. Aaliya asks Rhea not to express her joy and plans in front of anyone in the family. Rhea gets targeted by Dida, who has sensed Rhea’s plans already. Dida knows that Rhea is eyeing Ranbir to woo him. She tells Rhea that she can really see what Rhea is trying to do. She asks Rhea not to fool her and challenge her experience.

She tells that she will talk to Siddharth and ask him to leave the house, taking his wife away from them to maintain peace in the family. Rhea is shocked to hear this from Dida. Rhea can’t let Dida tell her truth to anyone. She decides to stop Dida. Rhea acts innocent to convince Dida, but the latter is too sharp to believe her. Rhea wants to stop Dida at any cost. What will Rhea do? Will she try to kill Dida? On the other hand, Pragya gets angered on Tanu and team. She tells Baljeet that Tanu and Aaliya have to live in her house, following her rules, else they will not just learn a lesson, but also receive a punishment. Keep reading for a full update.

Rhea finds Prachi packing her bags. She wants to know where is Prachi going. She thinks Prachi trusts her, she would have come along if she doubted her/Rhea. She wonders if Prachi is going somewhere else. She feels odd. She goes to clear her doubt. She asks Prachi where is she going. Prachi tells that she has booked her ticket, its a surprise for Ranbir. She tells that Ranbir doesn’t want to go and stay away from her, he can’t live without her. Rhea asks Prachi how can she come, who will take care of Dida and Pallavi in their absence. Prachi tells that it was Dida’s plan to send her with Ranbir and surprise him.

Ranbir likes the idea. She takes Rhea with her to warn her. Ranbir wants someone to give him surprise, it keeps love and excitement in life. Prachi tells that he can also get a good surprise. He tells that he doesn’t want to go. He asks Prachi to pack his clothes. Prachi tells that she will pack it. He asks her what is she hiding. He finds her hiding something.

Mitali cooks the food. She gets upset when no helper comes ahead to help her in cooking. Sushma meets Mitali. She tells her that she won’t get Poha. She asks her to make porridge ready for her. Mitali tells that she doesn’t know it. Sushma asks Shagun not to go against Pragya’s order, even she can disobey her daughter. Pragya comes there to scare Mitali with the work. She asks Mitali to learn things and show them what’s cooking, because she had complains with their cooks. Sushma asks about the lunch menu. Mitali tells that she liked the lunch prepared by the cooks. She asks Shagun to prepare the lunch. Pragya and Sushma tell Mitali that they will decide it, until she makes the breakfast.

Rhea asks Dida what is she doing. Dida tells her that Rhea can fool everyone in the house, including Prachi, but she knows it well that Rhea is still the same, a girl madly obsessed with Ranbir. She asks Rhea not to act ignorant and deny the blame. Dida threatens to ask her about Ranbir in front of the family. She asks why does she want to spend time with Ranbir. Rhea tells that Ranbir is just going to drop her to Bangalore, he is her past. She lies that there is nothing between them, they both are married to different partners now. Dida knows that Rhea is hiding the truth. Rhea gets angered hearing Dida’s taunts.

Shaina thinks Rhea got married to Ranbir. Ranbir and Prachi spend romantic time. He asks Prachi to stop him from going, else he will miss her. Prachi tells that its a matter of one day. He tells that he can’t spend time without her. She asks him to imagine that she is with him. He guesses that she is hiding something. She lies to him.

She stops him from checking the bag. She tells that its a surprise for him. He gets happy hearing about the surprise. He tells that he will keep the bag safe. He tells her that he wanted her to come along to speak to Siddharth, she should counsel Siddharth and Rhea so that their marriage doesn’t break. He tells that if she can save her sister’s marriage, then their divorce won’t happen. She asks him if they have any such big issue that it can lead to divorce. He thinks he is stupid and over dramatic. She asks him to talk to Siddharth, else he may feel she is biased, while he will appear neutral.

He understands that Prachi loves Rhea a lot. She tells that Rhea told that she has no one else than Prachi as her Maayka. She forgets something and goes. Pragya and Sushma enjoy Mitali’s frustration. Baljeet meets them. She asks Pragya to keep Mitali away from Aaliya and Tanu. Pragya tells that she has explained the rules to everyone. Sushma feels it was necessary to teach them a lesson. Pragya tells that she will punish them if they go against her.

Pragya tells that she used reverse psychology, he will have the breakfast and not get against her by believing Aaliya and Tanu. She doesn’t want Abhi to fight her when his family complains to him. She tells that she played the move beforehand, now Abhi won’t get against her. Rhea tells Shaina that she didn’t marry Ranbir, but Siddharth. Shaina sympathizes with her. She knew Rhea loves Ranbir a lot.

Rhea tells that Ranbir is married to Prachi. Shaina apologizes to her that she couldn’t help her. Rhea tells that things can change even now. She adds that Dida doubts her intentions, Dida just warned her and left. She tells that she has to speed up her plans and win Ranbir, before Dida tells the truth to the family. Stay tuned for next episode.

Reviewed Rating for Kumkum Bhagya 5th October 2021 Written Update Dida in danger: 3/5 This rating is solely based on the opinion of the writer. You may post your own take on the show in the comment section below.