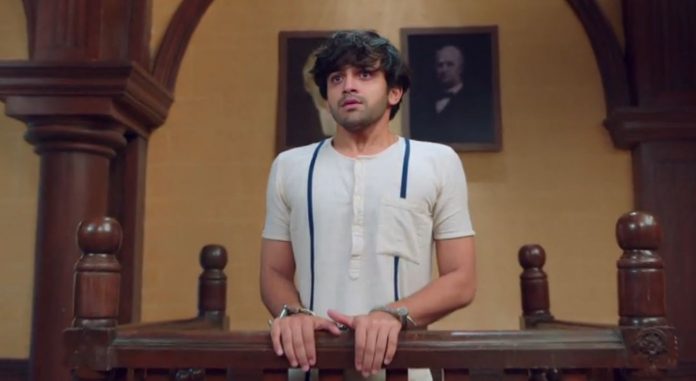 Barrister Babu 6th October 2021 Written Update Case finale Bondita tells Anirudh that she is unable to understand what to do next and how to do it. Anirudh tells her to cool down and give rest to her mind. He asks her to do Yoga so that her heart becomes calm and only then she will be able to find a way. Trilochan tells the doctor that Binoy becomes excited like a child when he sees Anirudh. He also tells him to not say anything about the treatment outside. Trilochan becomes relieved that Bondita and Anirudh went outside on time or else they would have known about his planning. Trilochan tells Anirudh that the doctor has given medicine to Binoy and has told to keep him under observation for some time.

Sampurna says that she will stay with Binoy but Trilochan shouts at her. He asks Anirudh to stay as Binoy was remembering him. Bondita agrees and tells Sampurna that they all should go home. Anirudh feels unwell and Trilochan gets worried and says that Bondita should perform Puja to pray for Anirudh’s health. Anirudh says that she should perform Puja as she will find a path after it. Trilochan feels happy that Bondita agreed to perform Puja and now his planning will be successful. Bondita also determines to be successful in conducting a plan given by Anirudh.

Bondita is busy praying to Maa Durga when Trilochan and Thakumaa sneak out of the house. Tupur cunningly smiles at Bondita performing Puja and feels happy that she will be now busy till the morning and not follow her. Tupur takes her stuff and leaves. Bondita remembers her conversation with Anirudh about Tupur hiding something and cleverly fools her every time. Anirudh asks Bondita to fool Tupur this time by acting against her personality. Bondita decides to perform Mantra Puja asked by Trilochan. Anirudh reminds Bondita that she used to put a pot on a stand and dress it in a sari and go out in her childhood. Everybody in the house used to feel that Bondita was studying but she used to roam outside.

Bondita tells Anirudh that Maa Durga will get angry if she leaves the Mantra Puja incomplete. Anirudh makes her understand that Maa Durga’s second name is Paap Nashini (destroyer of bad) and asks her to consider it as Maa Durga’s indication and follow that path and find out what Tupur is up to. Bondita dresses up a pot with a sari, plays her recorded mantra, and leaves. Tupur leaves for the temple carefully. Bondita is extra smart this time and does not want to create doubt for Tupur and hides behind Durga maa’s idol. Tupur uses her mirror to check if someone is behind her and does not find anyone.

Tupur recites Maa Durga’s mantra and Bondita observes her carefully. Aghori baba comes in front of Tupur and Bondita wonders who he is. Tupur asks him if he is fine and tells him not to worry as Bondita has not come here and performed Puja at home and will remain at home till sunset. Tupur tells him that they can meet each other for a long time.

A snake comes near Bondita but she doesn’t shout as Tupur will hear her and the truth will not be out. Bondita remembers that the day of Vijaya Dashami is her last chance to save Anirudh or else he will be hanged. She imagines Anirudh getting hanged and gets scared. Bondita decides that she cannot see Anirudh getting hanged and has to forget her fears to know the truth. She feels that the snake has been sent by Kali Maa for her safety.

Bondita gathers courage and throws the snake in Tupur’s direction. Tupur is scared and calls Aghori baba as Chandrachur and tells him to be careful. Bondita is shocked to hear that Chandrachur is alive. Chandrachur is angry at Tupur for taking his name and slaps her. Bondita remembers seeing no wound on Chandrachur’s leg after his death and also remembers Tupur sneaking out every night. Bondita connects all the dots together and understands that Tupur and Chandrachur have fooled the court and all of them to punish Anirudh. Chandrachur warns Tupur to not call his name as he is dead but Tupur informs him that she has checked properly and nobody is present here.

Chandrachur asks Tupur about Bondita and Tupur says that she was checking her room and will not sit still without finding out that Chandrachur is alive. Tupur requests Chandrachur to leave Tulsipur and go far away as she is concerned about his safety. Tupur tries to convince Chandrachur to leave immediately as his madness for Bondita may result in losing his life.

Bondita is even more shocked to know that Tupur knew that Chandrachur had evil eyes on her. Chandrachur is convinced and says that he will listen to her and leave as at this point no one is more important than her. Chandrachur thanks Tupur for all her help in hiding and asks her not to worry and go home. He also assures her that he too will leave in some time at a faraway place.

Chandrachur promises Tupur that once things settle down he will take her along with him and they both will live happily. Bondita decides to not let Chandrachur go so easily and plans to trick him after Tupur goes. She decides to take steps carefully without creating doubt for Chandrachur and hand him over to the police. Bondita finds a rope and traps Chandrachur in it. She comes out of the hiding, thanks Maa Durga, and takes her Trishool. Chandrachur gets shocked seeing Bondita and she tells him that she is feeling ashamed to call him his bother-in-law today. She says that her family considered him as their son, she looked upon him as her brother but today she is feeling embarrassed on him.

Chandrachur tries to explain Bondita but she shuts him up with a Trishool and says that she has taken the form of Kali Maa from Durga Maa. Bondita says that she is his death. She tells Chandrachur that he must have planned to fool them and get Anirudh hanged but he was very wrong. Bondita warns Chandrachur that she is Anirudh’s shield and will punish him for each of his sins. Bondita says that the first sin he committed was that he kept evil eyes on another woman in spite of being married. The second sin was assaulting Tapur. The third sin he did was faking his own death and trapping Anirudh in his false murder case. Chandrachur threatens Bondita that she cannot catch him and tries to run when Bondita stops him.

Bondita hurts Chandrachur on his face with the Trishool and says to him that he must have forgotten that a woman’s other name is Shakti (strength). Bondita vows to make him understand how brave a woman is and how powerful is her curse. Bondita warns Chandrachur that whenever he will commit the mistake of considering a woman weak that time he must look at the wounds on his face and understand their power. She says him that he get clear from his misunderstanding of being powerful. Bondita notifies Chandrachur that now bad will be destroyed and Anirudh will be free.

Reviewed Rating for Barrister Babu 6th October 2021 Written Update Case finale: 5/5 This rating is solely based on the opinion of the writer. You may post your own take on the show in the comment section below.