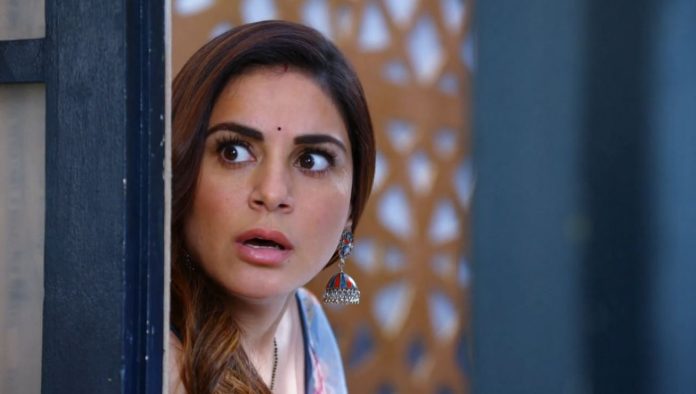 Kundali Bhagya 6th October 2021 Written Update News for Rishabh Prithvi tells Kritika that he was busy planning a surprise for her. She asks him about it. He tells that he was thinking of the best birthday gift for her. He adds that he loves her a lot. Kritika asks him to keep thinking and let her sleep. Sherlyn messages Prithvi, asking him to meet her at the back side of the house. Prithvi replies that he will be coming on time. Sameer wants to take Rishabh’s advice. He decides to take action. He tells Rishabh that he will tell Shrishti that he loves her.

Rishabh asks him if he has decided well or will lose confidence. Sameer says that he is confident. Rishabh says that he likes his self-confidence. He asks Sameer to call up Shrishti and share his feelings. Sameer asks him to stay back and watch him confess love to Shrishti on the video call. Rishabh doesn’t want to stay there and make Sameer and Shrishti uncomfortable. He asks Sameer to confess his love and speak out his real feelings, without getting hesitant.

Sameer still forces him to stay back, while Rishabh explains how a third person’s presence makes things odd for a couple. Sameer asks him if he is denying his request for the fact that they aren’t own brothers. Rishabh gets hurt by his words and makes him apologize. He asks Sameer to never tell this ever in his life. Sameer asks him to stay back to strengthen him and encourage. Rishabh agrees to witness Sameer’s love confession. Shrishti stays busy with her household work. Sarla asks her to give her some money to get coriander.

Shrishti wants her to bring potatoes and brinjal to make the dish. Sarla leaves at the right time. Sameer makes a video call. He tells Shrishti that he has come on her one call and saved her day. She tells that Karan, Preeta and Rishabh also came along and helped her, he can’t get the sole credit. Shrishti argues with Sameer. Rishabh laughs hearing their arguments. Sameer asks Shrishti to listen to him once. Rishabh comes in front of the camera. He tells Shrishti that she should hear out Sameer once, Sameer has called to tell her I love you, he loves her. Shrishti is amazed. Rishabh and Sameer get a shocker seeing Sarla behind Shrishti. They greet Sarla and turn tense. Shrishti wonders if Sarla just heard what Rishabh told about Sameer. It’s a hilarious moment.

Sameer tells that Rishabh asked him to call Sarla and tell her I love you. Rishabh explains that they all love her a lot. Shrishti makes a network issue and hangs up. Sarla wonders why Rishabh is doing mischief like Karan, maybe he loves her a lot and told today after a long time, for the reason that he was living away from family. She asks Shrishti to call Rishabh, she will tell I love you too to him. Rishabh tells Sameer that he really got scared of Sarla for the first time. He asks Sameer to not get scared and just go ahead to confess love to Shrishti. He boosts Sameer’s confidence.

On the other hand, Prithvi awaits Sherlyn. She asks him if their relationship is over, because they have promised Preeta in front of Bappa that they will break their ties. She adds that she doesn’t believe in keeping a promise, but he may keep his promise taken in front of Bappa. He tells that Bappa is immortal, and doesn’t care if they make false promises. He adds that he was just acting to save themselves from Preeta, they will always be together, they love each other.

She exclaims that she was too scared, she has fallen in a big problem, Rishabh was behaving like a loving husband, like he wants to have a family with her. She is tense because she doesn’t want to move on with Rishabh. He is glad to know that Rishabh has forgotten Preeta. She tells him that Rishabh isn’t disgusting like him, he has forgotten Preeta the day she got married to Karan. She confesses that she just loves Prithvi. Preeta happens to come there. She finds Sherlyn and Prithvi confessing love for each other.

She is shocked to realize that they faked their promise to fool her. She thinks she made a mistake by believing them. She decides to get Kritika and Rishabh there to show them the truth. She asks Sameer about Rishabh. He tells her that Rishabh and Kritika have gone shopping, and he is planning a surprise for Kritika’s birthday. Rakhi asks Preeta to accompany them to Anurag’s house. Preeta doesn’t answer her. Rakhi tells that maybe Preeta has some work. Preeta goes back to record Prithvi and Sherlyn’s affair truth.

Prithvi tells Sherlyn that he was acting to plead and apologize to Preeta, just to save themselves from getting exposed, he can fake any promise, he just wants Sherlyn in his love. Preeta records their love confession. She wants to expose their affair in front of the family. Rishabh waits for Kritika to return from the shop. Kritika asks him to accompany her. He tells that this isn’t any mall, but a roadside market. She replies that its an open mall. She seeks his help. Kritika calls Preeta to take her help. Preeta asks her if Rishabh is with her. She adds that she wants to talk to Rishabh at home, and asks him to come home rather than going to the office.

Sherlyn hears this conversation. She asks Preeta what she wants to talk to Rishabh. Kritika tells Rishabh that Preeta wants to talk to him on an urgent matter. Rishabh grows worried. Preeta rebukes Prithvi and Sherlyn for their lies. She asks them to pack their bags and leave the house. Prithvi asks Preeta why she is upset. Rishabh tells Kritika that he will drop her to the mall, and rush home, if Preeta has called him urgently, then the matter will be serious. Sherlyn tells Prithvi that Preeta would have seen them together and got to know their truth, she wants to expose them now by calling Rishabh.

They decide to stop Preeta, because they have to save themselves first. She suggests that they leave the house before Rishabh arrives. Preeta doesn’t want Prithvi and Sherlyn to fool the family all the time. She doesn’t care if the relationships break after the truth comes out. Rishabh reaches home and finds Preeta at the door. He asks her the matter. He asks why she is so tense. She tells him that she has seen the truth herself, she wants to tell him the truth, maybe he will be left disturbed after knowing it.

Rishabh believes her every word. He wants her to just say it. She tells him about Sherlyn and Prithvi’s extra-marital affair. He is really left in shock. Rishabh confronts Sherlyn about her affair. Prithvi denies the affair. Rishabh asks Prithvi to stay out of the matter. He asks his wife if this is the truth. Sherlyn also refuses to Rishabh. She tells that Preeta is lying about her to malign her character. Preeta tells that she has seen and heard their conversation. Sherlyn denies Preeta’s statement. She argues with Preeta to defend her character. She asks Preeta to have some shame. Prithvi asks Preeta not to defame them for no reason.

Sherlyn and Prithvi play a drama. Preeta reprimands Prithvi and Sherlyn. She shocks them stating that she has captured their misdeeds. She has their recording. Rishabh asks Preeta to present the evidence in front of them. Who will Rishabh believe this time? Will Preeta succeed in defeating Prithvi and Sherlyn? Keep reading.

Reviewed Rating for Kundali Bhagya 6th October 2021 Written Update News for Rishabh: 5/5 This rating is solely based on the opinion of the writer. You may post your own take on the show in the comment section below.