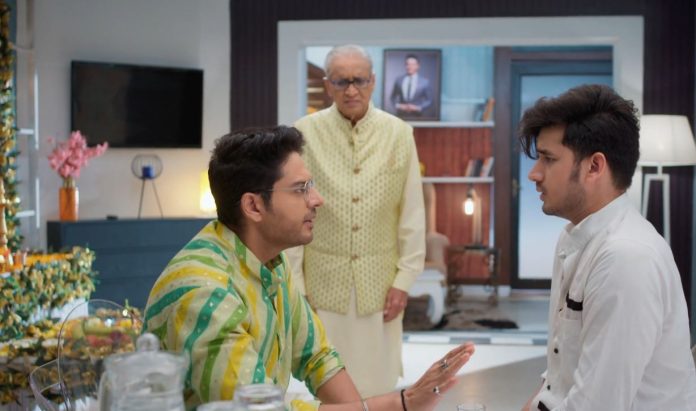 Anupama 18th October 2021 Written Update Anuj advises Samar Anuj says he is sorry to interfere in Shah’s family matter. He further says they should do something of Rohan, to stop him from troubling Nandini. Vanraj says he will handle Rohan. He thanks Anuj for helping Samar. Anuj says absolutely no stress. Vanraj asks where can he find Rohan? Nandini asks Vanraj to not become Rohan’s enmy for her. Vanraj says Rohan already became Shah’s enemy. He also says he is not a weak father that someone would trouble his children and he would not say anything. Anupama says if they leave Rohan now, he may create more troubles.

She tells Nandini, the fear which is in her eyes right should be seen in Rohan’s eyes. Kavya agrees to Anupama and says they will go to the police station next morning to file a complaint against Rohan. Bapuji asks Nandini to stay with them in their house till everything gets fine. Kinjal says to Nandini that they are lucky to have such supportive in-laws who doesn’t question them instead support them. Anupama says to Nandini that the next day is dussehra, when Durga maa defeated and killed Mahishasur.

She also tells Nandini that every woman has Durga Maa’s avatar in them. If this avatar wakes up every Mahishasur has to run away. In a low voice, Samar says he feels like breaking Rohan’s head. Anuj tells Samar, if in his age anybody would have troubled his love, he would have broken that evil person’s bones with his hockey. He further tells Samar that this would be the wrong way as one mistake cannot correct any other mistake.

Anuj continues telling Samar that he saw many boys ruining their lives because of their anger. He asks Samar to not take the wrong way. Anuj explains to Samar that only his family and Police will take action against Rohan in a legal way. He turns back to find Samar missing and thinks that he may have got tired and has gone to rest in his room. Anupama and Vanraj to think where Samar went? Kinjal says that he may have gone to his room to rest. Pakhi says to leave Samar alone for sometime as he will become normal after talking to Anupama. Samar on the other side is seen very angry. He recalls half of Anuj’s conversation.

Anuj prays to god to make Samar and Nandini’s love story successful. Anupama asks Anuj why he is leaving quietly. Anuj jokes with Anupama making her laugh. Anupama talks in Anuj’s way and tells him that she is lucky to have him. She further tells him that he is special to her as he brought a smile to her children’s face and saved/helped them a lot of times. Anupama says she will not be tense as she knows he is there. Anuj leaves saying the next day will be good as its dussehra. Shah’s discuss that they will go to the police station the next day after the pooja to file a complaint against Rohan. Kavya and Anupama tries to assure Nandini that everything will be alright with god’s blessings. Vanraj taunts saying with God’s blessing as well as Anuj’s help.

Vanraj further taunts Anupama saying Anuj always makes things right. He asks Anupama if she went to thank Anuj? Anupama replies yes, if someone does a good thing she will thank the person. She tells Vanraj’s thinking is wrong. Anupama leaves to talk to Samar. Vanraj recalls Anuj and his family’s moments. He thinks Anuj has become a hero in his family’s life. He thinks of finding Anuj’s one mistake to lower him down in his family’s eyes. Samar calls Rohan and asks him to confront him face to face the next morning. Anuj returns home and dances in joy. GK understands that Nandini is found. He asks Anuj if he is happy because Anupama said something which made him feel better.

Next morning, Shah’s and Anuj perform pooja in their respectives homes. Samar leaves the house without coming in anyone’s eyes. Rohan and Samar start fighting with each other. Anupama from inside feels scared for Samar. Samar and Rohan’s fights go wild. Anuj recalls Anupama’s words from last night. Samar reaches Anuj’s house and tells Anuj and Gk that he took revenge from Rohan. He further tells Anuj that he can’t go home because Anupama is every time blamed for his deeds. Anuj gets angry at Samar for beating Rohan. Anuj asks Samar what exactly he did with Samar.

On the other side, Anupama gets worried for Samar. Anupama feels something is wrong. Vanraj sends Kinjal and Paritosh to look for Samar. Anuj asks Samar to pick Anupama’s call. He stops Samar and Anupama receives a message from Samar’s number saying he went to see a friend who met with an accident. Shah’s feel relaxed thinking Samar is with a friend.

Anuj asks Samar to tell him exactly what happened between him and Rohan. Samar tells Anuj that he came to his house after hitting Rohan with a rod. In the next episode, Anuj will tell Devika that he doesn’t know how he will give Anupama the lehenga he bought for her. Devika will give Anuj’s Lehenga to Anupama herself. A card will fall down from the lehenga saying it is a special order of Anuj Kapdia. Flying in the air, it will reach Vanraj, who will get angry reading it. Anuj and Anupama will laugh seeing each other. Keep reading.

Reviewed Rating for Anupama 18th October 2021 Written Update Anuj advises Samar: 5/5 This rating is solely based on the opinion of the writer. You may post your own take on the show in the comment section below.