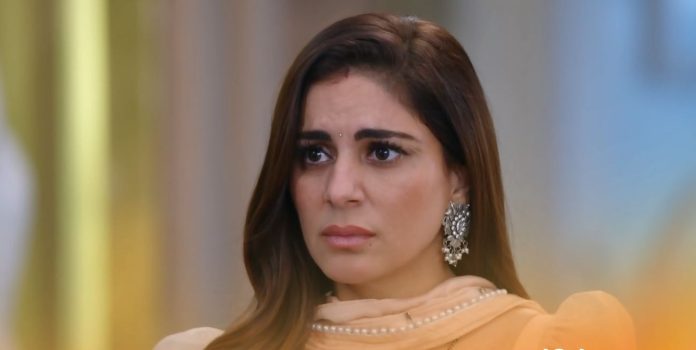 Kundali Bhagya 19th October 2021 Written Update Preeta berated Rishabh is declared guilty by the court, but Preeta and Karan are still determined to prove his innocence. Karan rushes out of the court when he can’t see Rishabh punished. Sameer informs Preeta that Karan left for Pune for some important work, it seemed like he has got an evidence in Rishabh’s favor. He tells that something is wrong with Sandeep, there is something hidden that they have to find out, it can prove Rishabh innocent. Preeta wants to call Karan and know the matter. Preeta returns home with the family. She finds Rakhi shattering.

She goes to pacify Rakhi, which makes Sherlyn tired. Rakhi vents anger on Preeta, adding that she hates her attempts, since Preeta just gives them fake hopes. She tells Preeta that her heart has broken up along with the faith. She asks Preeta to stop interfering in Rishabh’s case. Preeta goes to meet Sandeep after spotting him in the market. She confronts Sandeep. Kareena also gets angered on Preeta. She threatens Preeta that she will talk to Karan about her. She tells that Karan will definitely listen to the family. Why does Kareena berate Preeta this time? Keep reading.

Earlier in the show, Preeta’s statement isn’t considered in the court because she belongs to Luthra family. Sandeep’s lawyer tells that Sandeep’s condition is really critical, he will come to the court and give the statement against Rishabh. He calls Dr. Shashank as well. Prithvi wants Rishabh to get punished.

He scares Dr. Shashank, who testifies against Rishabh in the court. Rishabh’s lawyer questions Dr. Shashank about Sandeep’s partial recovery. Sandeep’s lawyer tells that Rishabh failed in killing Sandeep. Sandeep appears in the court. He tells that he lost everything because of Rishabh, he is the only earning person in his family, Rishabh snatched his well-being and everything.

Rishabh gets badly framed in the case. The family gets worried for him. The lawyer presents the cctv footage, where Rishabh isn’t seen clearly. Judge still declares Rishabh guilty.

Rakhi tells the judge that he will be ruining an innocent life if he punishes Rishabh. She begs him to not punish her son. The court gets a break time. Prithvi doesn’t want Rakhi to waste the court’s time. He wanted the verdict to get passed. He was praying that Rishabh goes to the jail for years. The judge tells that the court has decided for Rishabh, but since the time is over, the court is adjourned until the next hearing after three days. He tells that the same verdict will be given after three days. He locks the decision. Rishabh is taken into the police custody.

The family cries for Rishabh. Prithvi knows that Rishabh is really innocent. He has an evidence for Rishabh’s innocence, but he doesn’t want to reveal it to anyone. He is paying Sandeep’s lawyer just to win over Rishabh. Sandeep’s lawyer sends him away aide. He hears the lawyers talking about the evidence which can prove Rishabh innocent. Karan and Sameer overhear their conversation.

Sandeep’s lawyer tells that there shouldn’t be any reason that Rishabh wins the case. Karan follows the lawyer’s aide to find out the evidence. He misses to meet Rishabh. The family cries for Rishabh. Rakhi’s state gets too worse. Preeta consoles Rakhi. She tells that Rishabh will come back. Kareena asks Rakhi to calm down. She makes Preeta away from Rakhi. Rakhi loses strength when her elder son gets away. Sherlyn doesn’t shed any tear and still stays in good books of the family.

Rakhi’s emotions have saved Rishabh from the punishment too, else he would have got punished in the same hearing. Sarla prays for Rishabh. She understands Rakhi’s pain. She tells that Rakhi would be shattered. She adds that Rishabh is the best person she knows. She really wants him back home. Preeta pacifies a crying Rakhi, but gets accused by Kareena. Preeta is shocked. Kareena tells that Preeta had promised Rakhi and broke it, she didn’t keep their hopes. She feels Preeta doesn’t care for them, she is hurting them more, she wants them to just cry. She tells that she is just concerned for Sameer and Shrishti.

Sherlyn also accuses Preeta for giving them false hopes. She adds that Preeta chose useless lawyer for Rishabh. Preeta tells that she is trying, she will bring Rishabh home. Rakhi breaks her silence and scolds Preeta for failing her promise. She blames Preeta for breaking her trust. Sherlyn gets glad. Preeta took up the responsibility and put efforts as well. Still, she gets blamed as if she has sent Rishabh to the jail. Rakhi decides to talk to Mahesh and help out Rishabh. Kareena too scolds Preeta.

She asks Preeta to stay away from Rishabh’s case. She warns her to stay in her limits. She insults Preeta by taking Sarla’s name. Preeta doesn’t want to tolerate Sarla’s insult. She asks Kareena isn’t she tired of insulting her always. She is also habitual to forget Kareena’s taunts. She tells that she is also really busy like Sarla, she doesn’t want to focus on her nonsense. Kareena tells that she will complain about her to Karan. Preeta asks Sherlyn not to speak in between Rakhi and her.

She doesn’t feel bad of Rakhi’s words, knowing Rakhi is in pain. She scolds Sherlyn in front of Kareena. She tells that she will never accept any nonsense from anyone. Kareena promises to show her real place. Preeta meets Pihu, and spends time with her. Pihu asks for Rishabh. Preeta tells that Rishabh has gone for his work. Pihu misses Rishabh. Preeta is affected by Rakhi’s words.

Sherlyn goes to her room. Prithvi meets her. She gets angry on Preeta. He asks her to come to the point. She tells that his Preeta ji always scolds people, Preeta has spoken to Kareena badly and also insulted her. He asks her to calm down. She asks him not to support Preeta always. She is angry that everyone rebukes her all the time. She doesn’t want to get humiliation. He asks her not to vent anger on him. He tells her that their time will change. She asks him what will he do, he can’t do anything. He tells that he will take his revenge on Rishabh. He adds that its golden time for them to get lucky.

She asks him if Karan will sit quiet and watch the drama. He tells that Karan will become a drama himself, he will get busy after freeing Rishabh, he will be visiting Rishabh in the jail and miss the office work. He tells that the day they get the empire on their name, she can humiliate everyone back. He hugs her. Sudeepa meets Sandeep. She tells that nobody has time to meet him. Sandeep gives importance to himself. She asks him to demand money from the Luthras before the second hearing. He calls up Prithvi to demand money. Prithvi stops Kritika from her work. He asks her to dedicate some time to him.

Sandeep’s call makes Prithvi tense. He lies to Kritika and takes the call. Sandeep demands 60 lakhs from him. Prithvi tells that he will soon give it to him. Sandeep asks him to tell him the date. Prithvi tells that he will pay him 10 lakhs tomorrow and remaining later. He wonders how will he get the money. Sudeepa tells that Prithvi is fooling Sandeep, its better to get money from Preeta. Sandeep wants to wait for Prithvi. Sameer tells Pihu that he will go and get candies for her. Pihu tells that she wants to go as well. They insist Preeta to come along. Sherlyn goes to pacify Rakhi, who just talks of Rishabh. Rakhi misses Rishabh. She doesn’t find a way to help him.

Sherlyn thinks Rakhi is crying as if Rishabh is dead. She asks Rakhi to keep hope. Rakhi wants her answers. Sherlyn is happy that Rishabh is away. She thinks to have some sweets and celebrate. Sandeep takes Sudeepa out to have chaat. He thinks Luthras won’t keep an eye on him now. Preeta and Sameer are also in the same market. Sandeep sees Preeta there. He gets away from there. Preeta also sees Sandeep. She tells Sameer to take care of Pihu. Preeta finds Sandeep running away. She catches his huge lie that he can’t even walk. Sandeep hides from her. She catches someone else. She gets mistaken. Shrishti and Sarla plan to welcome Pihu home. Pihu visits them with Preeta and Sameer. Preeta tells them that she has seen Sandeep in the market. Sarla asks her to go and check him at the hospital.

Reviewed Rating for Kundali Bhagya 19th October 2021 Written Update Preeta berated: 3/5 This rating is solely based on the opinion of the writer. You may post your own take on the show in the comment section below.