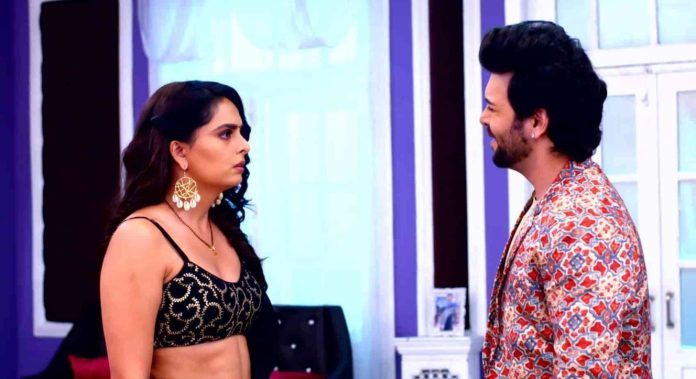 He tells that he reached the doctor and threatened him so that the doctor doesn’t admit the truth of Sandeep’s fake injuries to anyone. He tells that its the truth that Kritika is helping him. He reminds Sherlyn the reason why he had permitted her to marry Rishabh and enter the Luthra house. He tells that her marriage motive was to just help him/Prithvi. He feels sorry to say that she isn’t helping him a bit. Sherlyn silently listens to him. She feels much hurt by his words. He tells her that he is solely putting efforts in getting the Luthras down personally and professionally.

He boasts of his smartness and determined ire. He asks Sherlyn to show the same craze like him. Sandeep calls Prithvi to demand 60 lakhs, but Prithvi tricks him to buy some time. Sandeep thinks Prithvi will pay him money. He doesn’t feel the need to join hands with Preeta and withdraw the case against Rishabh. Sandeep is also vengeful against Rishabh. He just wants to make money out of Prithvi and Rishabh’s enmity. What will Preeta do next? Keep reading.

Earlier in the show, Prithvi thinks to arrange money by cheating in Rishabh’s company in his absence. He wants to give some money to Sandeep and then keep the bonus for himself. Preeta asks Shrishti not to get so angry. She tells that Kareena and Bani are family. Shrishti tells that they will never understand anything. She feels Kareena is still the same, even Bani has lost her mind, their nature is such that they always criticize Preeta. She asks Preeta not to tolerate their nonsense, else they will create fights between Karan and her. Preeta doesn’t think this can happen. Shrishti tells that they didn’t accept her heartily. She feels Luthras should thank Preeta. Preeta tells that she also answers them back sometimes. She asks Shrishti to stay back with her if she can stay silent. She tells that she has to meet Rishabh.

Prithvi wants to take an advantage of Rishabh’s absence in the office. He tries to get the payments to pass it to Sandeep. The manager refuses to issue the payment to him. Prithvi loses his cool. He tells the manager that he is trying to help out Rishabh. He adds that he wants to add a top-notch lawyer for Rishabh. He boasts of himself that he is handling the entire Luthra family and business. He scares the manager of Mahesh. He tells that Mahesh will fire him and not spare him.

The manager tells that he still needs Rishabh’s sign. Prithvi threatens him, and convinces him for issuing the hefty amount. He calls up Sherlyn and tells her the good news that he is transferring 80 lakhs to his account. Sherlyn asks him if he has got the money in his account. He tells that he will soon get it, he will get all the richness of Luthras in their hands. He gets Sandeep’s call once again and tells Sherlyn that its too irritating to answer Sandeep’s calls. Sandeep asks for money once again. Sandeep demands the money at the earliest.

Prithvi asks Sandeep to come and take the money at once. Sandeep gets greedy for money. He tells his mum that he is going to collect some money. He goes to meet Sandeep. Prithvi gets delighted seeing the funds transfer message. Preeta is on the way. She seo Preeta and help out Rishabh. He knows she is es Sandeep on the road. She is sure that she has really spotted Sandeep. She follows him to catch him and take him to the police. Prithvi is stuck in the traffic jam. Shrishti feels tensed that Preeta has hung the call, which is very unlikely. Prithvi gets Sandeep’s call.

Sandeep threatens him, thinking Prithvi is giving excuses. Preeta follows Sandeep. Sandeep doesn’t see her. She informs Shrishti about Sandeep. Shrishti and Sameer rush to meet Preeta. Preeta tries to know why is Sandeep doing all this. She waits to see whom Sandeep meets. Sandeep gets worried thinking Preeta would be sphe truth tdesperate to save Rishabh. Prithvi asks Sandeeying on him. He thinks to call Prithvi and ask where did he reach. Prithvi gets into an argument with someone on the way.

Sandeep asks Prithvi to reach on time, and not give any excuses. Sandeep misunderstands Prithvi, who is arguing with is someone whom she trusts, its someone from the family. Shrishti tellssomeone else on the road. Sandeep tells that he will tell tp to wait for him, he is not telling him about the non-payment, but to someone else. Preeta, Shrishti and Sameer spy on Sandeep. Preeta tells to the person there. Prithvi takes her advice and pays the man to get rid of him. He rushes to see Sandeep. He tells Sherlyn that he is going mad, handling so many things all the together. He argues with Sherlyn.

Preeta tells that that Sandeep is talking to slomeone. She doubts that its Prithvi. She wants to catch the mastermind. Sherlyn calls Prithvi. He is still stuck in the mess. He tells her about the accident. He gets frustrated. Sherlyn asks him to get rid of the little problem by paying moneySandeep gave the hint that the mastermind that it can be Prithvi. They hide from Sandeep and try to record his meeting with the mastermind. Prithvi arrives there. Sandeep wants to stop Prithvi from coming inside, since he suspects someone’s presence there. He doesn’t want the secret to come out. He messages Prithvi. Will Preeta be able to catch Prithvi this time? Keep reading.

Reviewed Rating for Kundali Bhagya 21st October 2021 Written Update Evil clash: 3/5 This rating is solely based on the opinion of the writer. You may post your own take on the show in the comment section below.