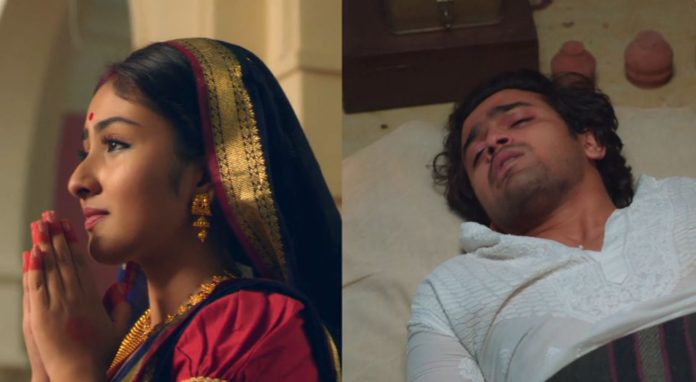 Barrister Babu 3rd November 2021 Written Update Diwali twist Bondita asks Mallika is she has any idea about Batuk, that he is in Tulsipur. Batuk makes Mallika lie to Bondita. Mallika tells that she doesn’t know anything. Batuk and Trilochan want Bondita to take care of herself and the coming baby. Anirudh is seen in the imagination scene of Batuk. Anirudh tells Batuk that he can’t hide his truth from Bondita for a long time. Batuk gets emotional to see him back and asks him to hug him once, its been a long time that they met. He tells that he doesn’t need to hide anything from Bondita, once Anirudh is back.

He realizes that Anirudh has gone too far from him, that he can’t even hug Anirudh. He is hopeful that Anirudh’s child will be coming in the world soon, and he will be the reason for everyone’s hopes and happiness. He tells that he will hug the baby and love him a lot. He loves Anirudh a lot, but hates Bondita. He swears to snatch Bondita’s baby and throw her out of the house. Later, he meets Trilochan to instigate him against Bondita. He defames Bondita’s character by calling her a selfish and ambitious girl who used Anirudh and his goodness.

He tells that Anirudh has saved Bondita’s life and gave her a good life, but she didn’t do anything for Anirudh. Trilochan believes that Bondita has saved Anirudh from getting hanged. Batuk tells that she did that but not for Anirudh, but to have her high image in the society. He adds that she just thinks of herself, how she looks to others and how well she makes her image, she is flying high and doesn’t have any value and respect for them. Trilochan asks him not to say nonsense. Batuk tells that Bondita overlooks them and also Anirudh.

He adds that Bondita is disobedient to even Anirudh. He tells that they are fed up requesting Bondita, but she just has to prove that she is a mighty woman. He asks Trilochan to just give orders to Bondita and compel her to follow them. Trilochan comes in Batuk’s words once he sets a new image of Bondita. Bondita gets a shock when Trilochan sets new limits for her. He doesn’t permit her to step out of the house. He makes it clear that she can’t go out anywhere during her pregnancy, once she delivers the baby safely, she can go anywhere.

She promises to take care of herself when she goes out to find out Batuk’s presence. He tells that she will be just grounded in the house for the entire pregnancy phase. He threatens of leaving the house, and also cutting off the ties with her if she disobeys him in any way. Batuk finds her helpless in front of Trilochan. He madly laughs. Bondita is troubled by Batuk’s odd behavior. She decides to talk to him and find out the stress he is dealing. She wants him to talk to her freely. She tries many ways but in vain. He doesn’t pay heed to her.

She doesn’t know the reason for his annoyance and change. She knows that their relation has seen many ups and downs, it has survived many storms, but this time she is insecure that their relation is threatened. Batuk finds her kiddish ways irritating. He doesn’t entertain her. Bondita is in a fix. She wants to be a dutiful wife, but also a dutiful student. Anirudh is her husband and her teacher also. If she chooses his happiness, then her promise given to Anirudh as his student will break. She wants to find way to fight the injustice happening with her. She wants to fulfill each of her promise given to Anirudh during their marriage.

She is troubled by his indifference growing beyond limits. Her prayers are finally answered. Anirudh makes a comeback from the death just for Bondita. Anirudh is alive. He wants to go home to his Bondita. He gets treated by a local village doctor. Anirudh fights his death just for the sake of Bondita. Anirudh will be soon making an entry in the Roy Choudhary haveli during the Diwali celebrations. How will Bondita react on meeting Anirudh, who marks his return on Diwali eve? Keep reading.

Reviewed Rating for Barrister Babu 3rd November 2021 Written Update Diwali twist: 5/5 This rating is solely based on the opinion of the writer. You may post your own take on the show in the comment section below.