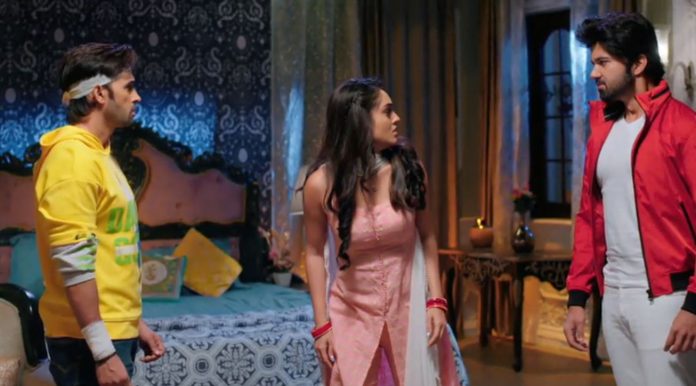 Sasural Simar Ka 5th November 2021 Written Update Limits crossed Reema brings Vivaan to the room. She tells that she is thankful that he got saved. She counts her favors how she saved his life and arranged blood for him, she also saved him from Mohit. She tells that much wrong has happened with him, because he wanted to divorce her. She asks him to believe her love now, she really loves him and will handle the entire family. She tears the divorce papers. She tells him that they should just have love between them. She happily tears the divorce papers.

Vivaan laughs seeing her drama. He tells that divorce is still needed. Reema asks him what does he mean. He tells that she is foolish to believe that everything got fine between. He adds that she is just counting her efforts in saving his life, she got all the credit, without thinking of his pain and sufferings. He tells that this isn’t love, she is still selfish, she gives importance to herself all the time. He makes her realize where she went wrong. He asks her did she ask him about his health, instead of deciding herself about their marriage.

He tells that she didn’t care for him genuinely, he would have filled sindoor in her maang and kept their marriage, but he feels she saved him from dying just because she thinks she loves him. Reema cries knowing what he thinks about her. Vivaan asks her if she knows the meaning of family. She knows that she doesn’t care for his family, like Simar used to do. He asks her what did she do to help the family. He tells how Aarav fought Mohit. She asks him if she has asked Simar about her heartbreak and sympathized with her. He tells that Reema would have not hugged Simar and shared her sorrow. He adds that she couldn’t fulfill her duties in any of the relations.

Reema calls it enough when he criticizes her. She tells that she is tired of proving her love. He tells that she does everything to count her favors, while Simar is selfless. She asks him not to compare her with Simar. She tells that Simar is ousted, now its just her Sasural. Vivaan tells her that Simar knew from day 1, that she has to leave the house, even then she tried to spread happiness in the family. He sings Simar’s praise, who was the perfect bahu, who kept all the relations and duties when so much wrong was happening with her.

He tells Reema that Simar got devoted to the family because she loved them, she had won the hearts and let her heart shatter. He asks Reema to understand Simar’s sacrifice, how Simar left Aarav when they both had much love for each other. He asks Reema to understand true love that exists between Simar and Aarav. He tells that Simar had come to meet him in the hospital and defended Reema’s love. He tells that Simar asked him to give a chance to Reema and understand her. He doubts if Reema is really Simar’s sister. Reema gets mad at him when he praises Simar. She insults Simar. She tells that Aarav has abandoned Simar.

Vivaan asks her to mind it. She crosses her limits and speaks demeaning things about Simar. Vivaan is shocked to hear her dirty speech, while Aarav comes there at the same instant. Aarav slaps Reema to bring her to senses. He can’t hear anything insulting about Simar. He warns Reema to stop taking Simar’s name from her dirty tongue. Reema asks Aarav how dare he slap her. She asks Vivaan to defend his wife, his brother has slapped her right in front of him. She asks Vivaan his family values. Vivaan apologizes to Aarav. He tells that Aarav has done right, if anyone insults a family member, then she needs a slap, that’s their family values.

Vivaan leaves with Aarav. Reema sheds tears. Chitra arrives to laugh on Reema. Chitra asks Reema not to do such things that she gets slapped. She advises Reema to just pack her bags and leave. Reema tears Simar’s pictures and burns it. Moreover, Reema calls Simar at Oswal mansion for a meeting, once everyone has gone to sleep. Simar comes to meet Reema. She cares for Reema. Reema tells that she has a burning fire in her. Simar asks her the matter. Reema tells that Simar has to burn to keep the fire on. She shocks Simar by berating. She tells that Simar’s existence is her problem. She tells Simar how Aarav slapped her today.

She hates Simar, for getting her punished for being her sister. She feels cursed that she is Simar’s sister. Simar is stunned. She tells that she will talk to Vivaan. Reema replies that she doesn’t regard Simar her sister. She ends her sisterly blood relation with Simar. She warns Simar to stay away from her Sasural. She loses control. She slaps Simar to give Aarav’s gift to her. Simar tolerates everything. She tells Reema that she will always stand by her and show her the right path. She is thankful to Reema for calling her and slapping her to make her realize that there is nothing left.

She wants to move on, after Reema has broken her illusion. She calls Reema the world’s best sister. Reema asks isn’t she tired of acting great. Simar tells that its not a drama, she finds happiness in almost everything, which Reema doesn’t know. She wishes Reema to stay happy in her Sasural and handle the entire family. She reminds how she was dedicated towards them. Aarav talks to Simar by his heart. He wishes she was with him. Simar blows off the fire and stays calm. Simar will be getting a makeover in the coming episode. Stay tuned.

Reviewed Rating for Anupama 5th November 2021 Written Update Dolly’s curse: 2/5 This rating is solely based on the opinion of the writer. You may post your own take on the show in the comment section below.