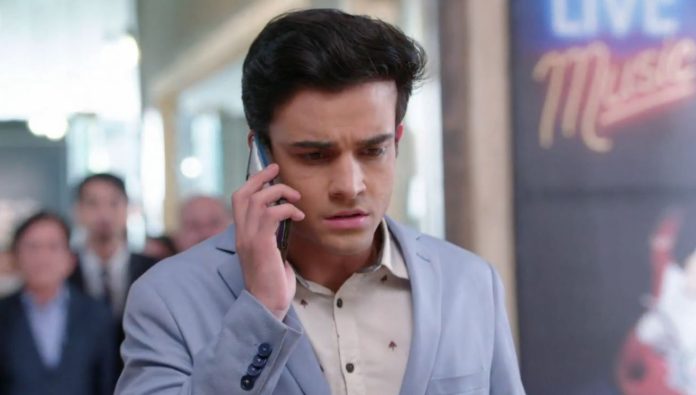 Rhea and Siddharth reach there. Rhea tells the doctor that she wants to meet her parents. Doctor tells that they both are in coma, Sushma wants to shift them and get them treated by foreign doctors. He wishes them a quick recovery. Rhea meets Abhi. She wishes him to talk to her once. She breaks down seeing both of them in coma. Siddharth understands Rhea’s pain. Rhea apologizes to Abhi for leaving him alone. She vents her hatred on Pragya, when Siddharth goes out. She feels Pragya couldn’t become a good wife and a good mother. She blames Pragya for ruining their family again. Aaliya arrives there to see Abhi.

She tells Rhea that Pragya is a curse for the family, Pragya has ruined all of them. She hugs Rhea. Rhea tells that they had a good family, but everything changed after Pragya and Prachi came into their lives. Aaliya tells that nobody can snatch Ranbir from Rhea. She asks Rhea to trust her love. Rhea tells that she really loves Ranbir. Aaliya promises to get Ranbir for Rhea. Rhea asks her plan. She goes with Aaliya. She tells her plan to Rhea. She asks Rhea to get Ranbir, Prachi and Siddharth to the hotel. Ranbir gets praised in the meeting.

The clients applaud him for the startup idea. Ranbir tells that he wants to make his startup idea bloom into a big business. The clients tell Ranbir that they have called the media without asking him. They give Ranbir the project. Ranbir gets delighted. He goes for the press meet. Aaliya tells Rhea that the chawl guy had informed him about Abhi. Siddharth gets tricked when he overhears Aaliya’s conversation on the fake phone call. Siddharth calls Rhea, who switches off the phone. He thinks to call Prachi. He tells about Aaliya, who had conspired the attacks on Abhi and Pragya. He adds that the lady is going to pay money to the goons at the hotel.

Prachi tells that she has to nab the culprit, she will meet him at the hotel. Rhea informs Aaliya that Prachi and Siddharth are leaving for the hotel. Aaliya asks her to get Ranbir there. Rhea takes up Siddharth’s call and fools him to avoid the talk. Ranbir asks the men to call the media persons and announce the project. He thinks Prachi will be madly happy knowing their dream project has started. He calls Prachi at the same time when she calls him. He avoids Rhea’s calls. Rhea tries to reach him. Ranbir gets busy in the meeting. Aaliya asks Rhea to get Ranbir to the hotel some how, the entire plan depends on him. Rhea leaves a message for Ranbir.

He reads that Prachi and Siddharth have gone to a hotel room together. He gets disturbed by her messages. He calls back Rhea. He asks Rhea not to tell such things about Prachi. Aaliya notices Siddharth following her. She enters the room and locks the door. Siddharth informs Prachi about Aaliya. Prachi tells him that she has reached the hotel. Ranbir gives his interview. He tells that its his wife’s dreams, because his dreams are her dreams, they have much love between them. Rhea sends Prachi and Siddharth’s picture to Ranbir. Ranbir is lost after seeing the picture. Rhea lies to him further on the call. Ranbir avoids the media answers.

Rhea blames Ranbir for not stopping Prachi from snatching her husband Siddharth. She tells that she lost everything because of him. Ranbir is devastated. The clients ask him not to leave the press conference in this manner. They threaten to cancel the deal if he leaves. Ranbir chooses to leave the deal for Prachi’s sake. The clients scold him for the unprofessional behavior. Rhea tells that she has followed Prachi today and found her at the hotel, booking a room to spend time with Siddharth. She further fills filth in Ranbir’s mind against Prachi and Siddharth. She tells that Ranbir’s faith on them has given them courage to cheat.

She angers him, asking him does he want his wife’s affair. Ranbir leaves for the hotel. He loses the golden opportunity, just to clear his doubt. Prachi and Siddharth get inside the hotel room. They are trapped. Prachi wants to know who is the woman who conspired to kill her parents. They don’t find anyone there. Ranbir reaches the hotel and meets Rhea. She leads him to the room to show Prachi and Siddharth in a wrong light. Ranbir finds Prachi and Siddharth together in the bed. Will he lose his faith on Prachi? Keep reading.

Reviewed Rating for Yeh Rishta 8th November 2021 Written Update Twisted fate: 1/5 This rating is solely based on the opinion of the writer. You may post your own take on the show in the comment section below.