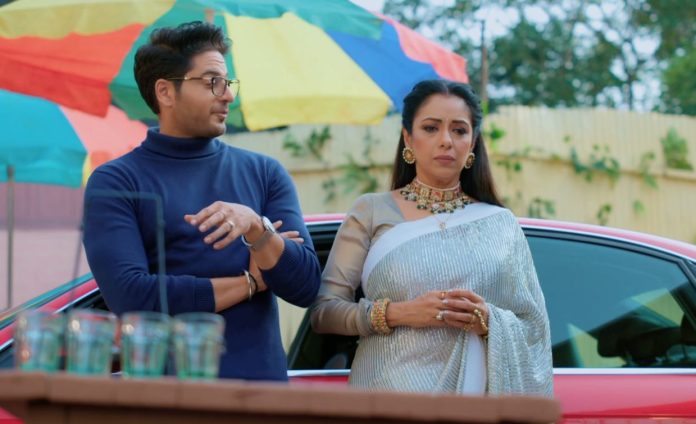 Anupama 7th December 2021 Written Update Anuj’s accident Vanraj says to Anupama that he won’t change his decision. He asks her why she is getting affected with his decision? Vanraj also asks her to live her own life and let him live his. He tells her that his life’s problems are only his own. Anupama explains to Vanraj that his thoughts may work in relationships abroad but not India. She also explains that in India, each and every relationship is connected to each other and also affects one another. Anupama says in India even neighbors get affected by either crack or happiness in a relationship.

Anupama continues explaining to Vanraj that his divorce will affect Baa-Bapuji, Pakhi, Paritosh and even Samar too. She tells him that divorce is a big thing in India but not wrong. Anupama explains that divorce should be the last decision. She asks him to think carefully, if he tried all the ways to save his relationship. Anupama once again repeats that his divorce will affect other family members too, not only him and Kavya. Vanraj tells Anupama that she is right but he already has made a decision. Anupama reminds Vanraj that he married Kavya because he loved her.

Vanraj explains to Anupama that his love for Kavya blew away, just like camphor blows away in some days from the pooja thali, if a person forgets to remove it. He clearly tells Anupama that he doesn’t live anymore. Anupama reminds Vanraj that he loved Kavya even after knowing that she was rude/insolent and irritable since starting. She tells him that he loved Kavya with all her limitations. Vanraj replies that he loved Kavya till she didn’t show dishonesty and snatched the house by deception. Anupama says Kavya returned the house even after snatching it. Both Anupama and Vanraj hear noise from Kavya’s room.

They get shocked to see Kavya’s condition. Kavya throws things and asks everyone to go away. Anupama tries to stop Kavya but she pushes her away. Anupama recalls how she similarly got uncontrollable and inconsolable when she saw Kavya and Vanraj in a romantic position in her bedroom in the past. She also recalls how her kids, especially Pakhi consoled her. Anupama tries to calm Kavya but the latter doesn’t listen to her. She picks up something to hurt herself, saying that she doesn’t want to live. Vanraj snatches the thing and shouts at Kavya to stop. Kavya cries badly with wall’s support. She compares her past situation with Kavya.

Anupama hugs Kavya to console her. Vanraj asks Anupama to not show her greatness. Anupama says it is not her greatness but humanity. She tells Vanraj that it doesn’t matter to her if someone teases her by calling her names like Devi etc. Anupama tells Vanraj that she won’t stop herself from wiping tears from anyone’s eyes. Vanraj feels irritated with Anupama’s words. Anuj on the other side tries to call Anupama. He tells Anuj that Samar told him that Anupama is alone in the Shah house with Vanraj and Kavya. Anuj and GK feel worried for Anupama. Anuj tells GK that with tension, he is getting some weird feelings like something is going to happen.

Vanraj makes fun of Kavya’s insecurities. He tells Anupama that he left her for Kavya, made his parents angry and became zero in his own children’s life. Vanraj says everyone in his office laughed at him and even society taunted him for his decision of marrying Kavya. He continues explaining that he tolerated Kavya, her anger, rudeness and everything but she still feels insecure. He says Kavya’s insecurities are not his fault. Anupama explains that Kavya too tolerated him. She requests Vanraj to handle Kavya. Vanraj asks Anupama, why is she interfering in his and Kavya’s relationship?

Anupama tells Vanraj that his and Kavya’s relationship does matter to him. She continues saying to Vanraj that he can do anything with his relationship. Anupama tells Vanraj that his decision doesn’t affect her but affects his whole family instead. She reminds him that Pakhi has started to not trust the marriage relationship. Anupama asks Vanraj to think, what Pakhi will see and learn seeing her father getting divorced for the second time. Vanraj asks Anupama what she wants Pakhi to see and learn? Anupama replies that she just wants Pakhi to see her father talking respectfully with his wife. She asks Vanraj to not stop respecting a relationship or person.

Anupama explains to Vanraj that their values teach them to help their own enemies too, instead of making fun of them. Vanraj says he tried talking normally but what can he do if Kavya is screaming and shouting. Anupama asks Vanraj to calm Kavya for humanity. Vanraj reminds Anupama that she also slapped Kavya once. Anupama explains to Vanraj that she even forgave Kavya a lot of times after that. She further explains that she is able to move on only because of forgiving others. At last Anupama requests Vanraj to wait for some days to think and then make a final decision with family.

Kavya thanks Anupama for supporting her. She tells Anupama that she agrees with her that anger is like poison. She says that she drank her poison. Kavya for the final time tells Vanraj that she won’t divorce him at any cost. Vanraj remains adamant on his decision to divorce Kavya. Both of them argue on divorcing and not divorcing each other. Anupama interrupts and tells them that she can’t explain them anymore. Kavya stops Anupama from leaving and asks her to listen to her full conversation. Vanraj asks Kavya will Anupama or he listen to her nonsense. Kavya explains to Vanraj that her words will benefit him only. She tells Vanraj that she won’t let him live peacefully if he will hurt her.

Kavya turns and wounds her forehead. Anupama tries to stop her. She makes Vanraj angry by saying that she will make a false complaint to the police, that he gave her her forehead wound. Vanraj shouts Kavya. Kavya asks Vanraj to lower his voice, otherwise neighbors would become witnesses of the domestic violence case that she is going to file against him. Shocked, Anupama asks what is doing. Kavya tells Anupama, she is doing what she should have done, when Vanraj got into an affair with her, even after being married to her. She continues telling Anupama that she should have filed a cheating, mental assault and torture case on Vanraj earlier.

Anupama explains to Kavya that she could have filed a complaint, as it was her right. She also reminds Kavya that Vanraj didn’t cheated, tortured or beat her. Anupama explains to Kavya it will be wrong if she files a false complaint against Vanraj. Kavya asks Anupama to think that she is taking her revenge. She says to Anupama that she should have taught a lesson to Vanraj earlier, so that he couldn’t have dared to ask for divorce, the second time. Kavya says to Anupama that she will take revenge for everything she faced in the Shah house. Anupama asks Vanraj to make Kavya understand till she brings Baa-Bapuji. Kavya stops her and says that no one can change her decision of calling the police.

Vanraj tells Kavya that he will call the police himself as it will help him go away from her. Anupama disconnects the call to police and calls both Vanraj and Kavya mad. Vanraj says Kavya has gone mad. He challenges Kavya to try her best and declares that he will divorce her anyhow. Vanraj explains to Anupama to not interfere as everyone doesn’t deserve her goodness. Vanraj leaves. Anupama too leaves giving her last piece of advice to Kavya. Kavya feels worried. Anupama gets surprised to see Anuj outside. Anuj explains that he tried contacting her, but failed to reach her. Anupama snatches tea glass from Anuj and drinks. She tells Anuj that she isn’t fine and apologizes for her sudden action.

Anuj asks Anupama to share her present feelings with him. Anupama tells Anuj that Vanraj is adamant on taking divorce from Kavya and the latter wants to teach a lesson to the former by filing a false police complaint. Anuj asks a false complaint or case? Anupama tells Anuj that she may be looking mad at him for interfering in others’ lives. Anuj tells Anupama that he understands that today’s people call selfless and good people mad and selfish people normal. He tells Anupama that some people call her or think of her as a super idiot person but he is very proud of her.

Anupama asks what she can do if she feels for other people. She tells Anuj that she went through a similar phase like Kavya, she had her family members to console her but Kavya has only one friend, Vanraj. Anupama further says Kavya must be feeling alone. Anuj tells Anupama that he understands what she is thinking. He says that he hopes that Vanraj-Kavya’s fight remains temporary just like Samar-Nandini’s. Anupama tells Anuj that Vanraj will not leave his admance. Anuj asks what will Kavya do if Vanraj remains adamant. Anupama reveals to Anuj that Kavya tried to commit suicide, when Vanraj refused to marry her earlier. She tells Anuj that she is scared that Kavya’s one wrong step can affect her as well as the whole Shah family.

In the next episode, Anuj will tell Anupama that he will pick her up the next day for their next project site visit, that is outside Ahmedabad. Anupama will be seen getting ready in front of the mirror. Anuj will meet with an accident while saving a bicycle rider. Anupama will get worried thinking why Anuj didn’t reach to pick her up. She will even try to call Anuj.

Reviewed Rating for Anupama 7th December 2021 Written Update Anuj’s accident: 3/5 This rating is solely based on the opinion of the writer. You may post your own take on the show in the comment section below.