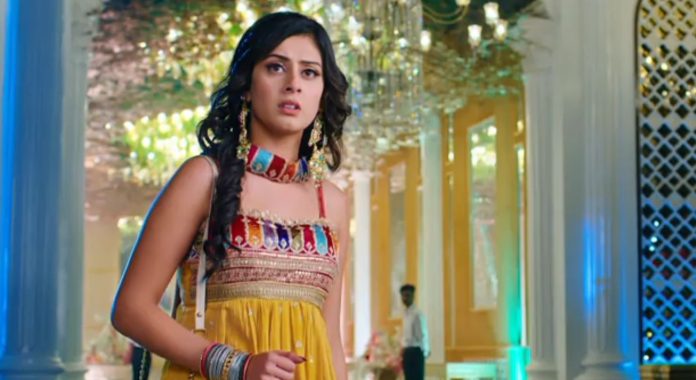 Udaariyaan 17th December 2021 Written Update Jasmin on mission Tejo and Angad get into an odd moment, when Angad fixes her the hook/button at the back side of her dress. Angad wishes Tejo comes in his life. Angad wants to propose her, but isn’t in a hurry, knowing Tejo’s love and tears are only for Fateh. He wants to end her tears, and bring a smile on her face. Tejo is clear-minded that she will not give Fateh’s place to Angad. She just loves Fateh and has his memories. Moreover, Fateh and Tejo feel each other’s presence all the time. Now, Fateh knows that Tejo is close to him, but Tejo is still unaware that Fateh didn’t leave for Canada with Jasmin. Tejo prays for Jasmin and Fateh’s happiness, but Jasmin has evil intentions on her mind. Jasmin finds Tejo with Angad.

She finds out their residence as well. She sneaks inside the villa to find out if Angad and Tejo are serious about their relationship or if Angad is planning to unite Tejo and Fateh. She knows the truth of Tejo and Angad’s fake engagement. She doesn’t understand why Tejo left the village and chose to live with Angad, without any formal relationship between them. Jasmin hides from Angad, who gets suspicious about her entry. Angad, Tejo and Riya spend family time and play cricket in the lawn, while Jasmin watche them from far. What step will Jasmin take against Tejo? Will Fateh know about Jasmin, and return in Tejo’s life to protect her?Keep reading.

Earlier in the show, Fateh cries in Tejo’s memory. Tejo still feels his presence and gets restless. Angad comforts her and makes her smile like always. Jasmin finally reaches there. She gets to hear Fateh’s voice when he talks to the fellow drivers. She learns about Fateh’s presence, and even Fateh gets aware of her. Is this for real or again a hit and miss? Jasmin enters the party finds Tejo’s smiling face, while Tejo is busy dancing with Angad. Fateh and Jasmin get to see Tejo living her life happily with Angad, by forgetting her past.

Jasmin fails to see Fateh, Angad and Tejo in the party hall. She just gets to know that Angad had been there in the party, and Tejo was also with him. She wants to find out where do they live, so that she can find Fateh as well. She finds Varun there. Varun is her new client, whom she has to trap. She calls Varun and tries to fix their meet. She realizes that Varun knows Angad, and can help her reach Angad’s house. She decides to get Angad’s address from Varun and then chase Tejo and Fateh too.

Jasmin proceeds with her plan, while Fateh gets to see Angad’s true concern for Tejo. Fateh doesn’t want to return in her life and create any problems. He wants her to stay happy with Angad. He decides to stay away from her as much as he can. Angad and Tejo leave for home in a rush when they get a call from Riya, and learn that Riya is down with fever. They both want to be home and look after Riya.

Tejo and Angad get into a cute moment when he helps her change the dress, without looking at her. Angad shows his decent charming once again. Angad has feelings for her, but she doesn’t feel anything for him. Tejo just thanks him for the help and goes away. Jasmin meets Angad’s business partner Varun and tries to get Angad’s details from him. She also frames him into the affair trap by getting their picture clicked. Varun doesn’t know that she will be making him lose in the divorce case. He innocently tells her about Angad’s address as well.

Jasmin thinks of leaving after getting to know what she wanted. She gets desperate to see Fateh and Tejo at Angad’s house. She goes in search of Angad’s house, while Fateh receives a shocker at the party venue when he learns about Sharma’s heart attack. Fateh rushes Sharma to the hospital after doing his best to revive Sharma. He becomes a savior for Sharma. Fateh stays with Tanya while Sharma gets treated by the doctors. The doctor informs Tanya that Sharma got saved just because of Fateh. Sharma and Tanya get thankful to Fateh for his help. Sharma makes Fateh promise that he will always be there for him, he will never quit the house or leave him.

Fateh is worried that Tejo and Angad can visit an ill Sharma and then get to see him. He promises Sharma, but doesn’t want Angad and Tejo to see him. He doesn’t want Tejo to know that he didn’t go to Canada with Jasmin. Fateh lies to Sharma with his identity. He tells his fake name Jaideep. Next, Angad and Tejo spend time with Riya, while Jasmin arrives there to find out the happenings between Angad, Fateh and Tejo. She suspects that Angad has sheltered Tejo and Fateh. She enters the house secretly and checks for Fateh, but fails to find him. She just finds Tejo and Angad. She wants to know where did Fateh disappear this way. Jasmin gets close to get caught by Angad. Stay tuned.

Reviewed Rating for Udaariyaan 17th December 2021 Written Update Jasmin on mission: 3/5 This rating is solely based on the opinion of the writer. You may post your own take on the show in the comment section below.