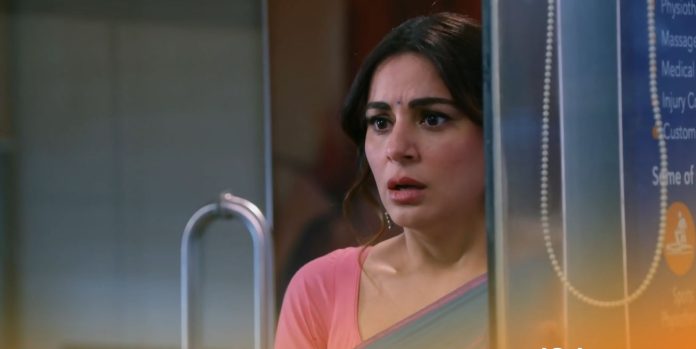 Kundali Bhagya 21st December 2021 Written Update Maddening Prithvi tortures the Luthras brutally. Sherlyn stops him and asks him to control his temper. He tells her that he should have beaten them more, because the wounds of Luthras work as a healer for him. He doesn’t want to spare the Luthras. He tells that he will always keep them in control. Kritika takes Rakhi to the doctor, after the latter gets beaten up by Prithvi. Rakhi asks Kritika not to tell the doctor about her wounds, that Prithvi has beaten her with a whip. Kritika asks her not to worry, she won’t tell anyone that Prithvi tortures them in the house.

Preeta gets to overhear Kritika and Rakhi’s conversation. She sees them in the hospital and hides to know the matter. She is shocked to know about Rakhi’s wounds because of Prithvi’s torture. She cries for Rakhi. Luthras pay a big price by making Preeta out of their house. Kritika tells that Prithvi treats them like animals. She cries and regrets the ongoing tortures. Preeta decides to answer back Prithvi by going back home and oppose his evil act. Preeta will come back as a bold strong woman, who will give a tough competition to Prithvi.

Earlier in the show, Sherlyn finds Karan drinking. She asks Natasha to get Karan’s attention. Natasha asks Sherlyn to leave them alone. Natasha asks Karan is he stressed. She acts like a good friend to him. She tries to woo him. She tells Sherlyn that no girl will enter Karan’s life now. Sherlyn wonders if Natasha can make her place in Karan’s life. Preeta misses Rakhi and recalls her words. Rakhi also misses Preeta. She wants to visit Preeta once and find out if she is okay. She doesn’t want to meet Preeta after recalling the past. Preeta recalls the Luthras blaming her and rebuking her with hatred. She cries after the bad nightmare. Shrishti gets scared seeing Preeta’s tears and shouts to call Sarla.

Sarla comes to Preeta’s room on Shrishti’s shouting. Sarla consoles Preeta after waking her up from the sleep. She tells that it was just a nightmare. Preeta is worried that she didn’t see Rakhi in her dream. Sarla worries for her. Rakhi tells Kareena that Preeta had come in her dream, she was crying and asking her why did she leave her. Kareena asks her not to think of Preeta all the time. She tells that she should forget Preeta. Rakhi tells that Preeta was asking about Karan and Mahesh in her dream. She wants to go and see Mahesh once. Kareena tells that Prithvi will start a huge drama if they do so.

Rakhi tells that she can’t get scared of Prithvi and forget her husband. Kareena tells that she will also accompany Rakhi. She gets angry that Preeta has done a magic on Rakhi. Preeta tells Sarla that Rakhi needs her. Sarla tells that nobody needs her, Luthras don’t need her. She asks Preeta not to get stuck in the past, if Mahesh and Rakhi worried for her, then they would have stopped her at home. She asks her not to think about them, and just think about herself. She tells that the dream has no reality. She grows worried that Preeta is seeing Luthras in her dreams.

Shrishti, Janki and Biji sympathize with Preeta. Sarla asks Preeta why is she thinking of Rakhi and Mahesh. Preeta wants to tell Sarla about her visit to the Luthra house. She tells Sarla that Prithvi is troubling the family. Sarla doesn’t listen to her. She tells that she doesn’t want to know anything. She just cares for her daughter. She asks Preeta to forget them, they always make her cry, they don’t respect her. She cries seeing Preeta’s love for the family. She asks Preeta not to cry or dream about that family, who abandoned her without any mercy. She hugs Preeta.

Rakhi and Kareena go to the basement to meet Mahesh, who sits scared and lonely. They cry seeing him chained up. Mahesh gets scared seeing them and asks them to go away. Rakhi tells him that she is his wife Rakhi. Kareena asks her not to go to him. Rakhi asks Mahesh to look at her once. She goes to Mahesh, and he tensely attacks her. Prithvi reaches there. He shouts seeing Rakhi and Kareena there. He scares Mahesh further. Mahesh wants to beat him, but falls down because of the chains. Prithvi asks the nurse where did she go. She tells that she had gone to get medicines for Mahesh. She shows the whip.

She beats Mahesh in front of Rakhi and Kareena. Sherlyn and Prithvi enjoy the sight. Rakhi tries to get saved and bears the tortures. Kareena asks the nurse how dare she beat Rakhi, is she blind. Sherlyn also fakes her concern for Rakhi. Prithvi tells that the nurse is following his orders, Mahesh has become an animal and attacks everyone, he is in the house just because of the family, else he would have been sent to the mental asylum. He asks Kareena and Rakhi to leave from Mahesh’s room. Sherlyn tells Prithvi that Mahesh deserves this punishment.

He tells that the entire Luthra family is on his mercy, he can ruin their lives in a minute. He tells her that nobody can get saved from his wrath. Later, Biji reads the horoscope for Sarla. She tells that Sarla’s wish will be fulfilled today. She asks Sarla not to think much. Sarla tells that Preeta had gone away for two years, but after her return, she started thinking of Luthras in one day. She feels Luthras never deserved Preeta, Karan held Preeta responsible for Pihu’s loss and broke his relation with her. She never thought that she will need to tell Preeta. Preeta apologizes to Sarla.

Sarla advises her to not feel sorry for herself. She wants to tell her something about her elder sister Pragya. She doesn’t want Preeta to do the same mistake and undergo the same pain. Rakhi and Kritika meet Sherlyn in the kitchen. Rakhi apologizes to her. Kritika finds Rakhi hurt. She stops Rakhi from doing the work. She tells that she will assist Sherlyn in the work. Sherlyn asks Kritika to take Rakhi to the clinic. Rakhi refuses. Sherlyn insists them to go. Kritika takes Rakhi with her. Prithvi gets angry on Sherlyn’s move. Stay tuned.

Reviewed Rating for Kundali Bhagya 21st December 2021 Written Update Maddening: 3/5 This rating is solely based on the opinion of the writer. You may post your own take on the show in the comment section below.