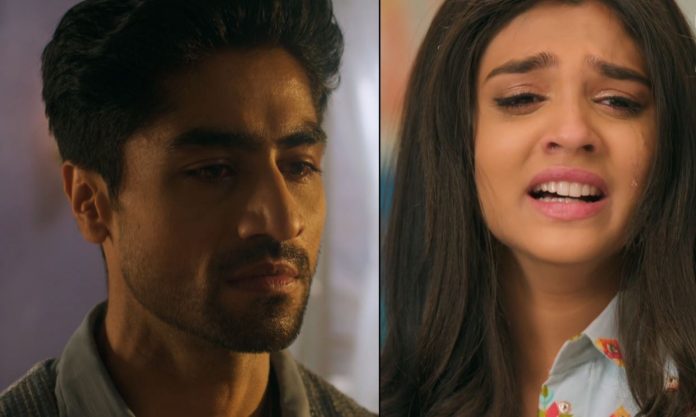 Yeh Rishta 4th January 2022 Written Update Love compels Akshara asks Aarohi to come and try jewellery. She asks Aarohi what she is studying as her internship is going on. Aarohi says studying is important for exams. Akshara asks which exam? Aarohi says that doctors go through exams everyday. She says she sees new patients and new diseases everyday and needs to be updated. Aarohi further says internship is just like on the job training. She asks Akshara if she doesn’t trust her? Akshara asks Aarohi to try her jewelry first. Aarohi asks Reem to try her outfit and jewelry on Akshara as she is busy.

Harshvardhan gets angry and scolds Manjiri for trying to take everyone’s decisions herself. Manjiri says she has handled the Birla house for many years. She asks doesn’t she has the right to organize her son’s engagement at home. Anand says they should do as Manjiri is saying. He asks Manjiri to organize Abhimanyu’s engagement functions at home. Manjiri gets happy and thanks Anand. Parth comes there and asks Manjiri to keep smiling as the groom’s mother should have a smile on her face. He gives a high five to Manjiri. Manjiri says Abhimanyu’s engagement is a big day for her.

At the Goenka house, Aarohi sees Akshara trying on her clothes and jewelry. She thinks Manjiri’s sent clothes and jewelry is too much for her. Aarohi thinks Manjri is similar to Akshara. She thinks that she needs to focus on her becoming MD as the exam date may get finalized any time. Aarohi thinks she will prove Mahima that she is the best. Reem receives Manjiri’s call. She leaves the phone call on hold to handle something on the stove. Reem leaves her phone in front of Akshara to get her phone’s charger. Abhimanyu gets mesmerized seeing Akshara decked up in the engagement outfit sent by Manjiri.

Akshara too sees Abhimanyu seeing her. She looks at Aarohi and switches off the video from her side. At Goenka house, Kairav sees Vansh upset. Vansh tells him that he looks fat in every outfit he has. Kairav tells Vansh that he looks handsome in every outfit he likes to wear. Vansh says they have mirrors in their house and he knows he looks. He says he can see how he looks in society’s eyes. Kairav tells Vansh he looks good in the eyes of the people who love him. He asks Vansh to not think of others who don’t love him. Vansh thinks he didn’t have to think about his looks till now. He thinks he has started thinking about his looks after her arrival.

Vansh changes the topic and asks Kairav what he was saying? Kairav asks Vansh to discuss with Reem what and how to do with the shagun envelopes. Vansh cleans Kairav’s glasses as always. Reem smiles seeing it. She takes her hair behind her ear feeling shy. On the other side, Abhimanyu and Akshara close the engagement rings kept at their houses. Abhimanyu thinks he will surely share the pain of love with Akshara. He thinks of meeting Akshara at the engagement. Akshara thinks to think of a plan to escape from going to Abhimanyu and Aarohi’s engagement. Next morning, Reem is seen preparing for engagement at Birla house. Parth gives coffee to Shefali. Shefali smiles, feeling Parth’s care.

Manjiri says she too will dance happily just like Goenkas. Harshvardhan makes fun of Manjiri, Goenkas and Akshara. He says he is relaxed that their to be daughter in law is sensible. He calls Goenkas “nachaniya khandaan”. Manish, Akhilesh and Kairav overhear them. Abhimanyu waits for Akshara desperately. He thinks he wants to see how Akshara hides her pain seeing him getting engaged to Aarohi. Abhimanyu sees Abhimanyu’s bracelet in his room and gets sure that Akshara came to his room earlier. Anand tries to handle the matter saying that Harshvardhan did mean anything wrong. Manish says yes they are a dancing family. He dances and takes Harshvardhan in his arms. Nishtha records their dance.

Everyone present feels shocked and laughs. Akhilesh explains that by all these conversations, bonds and relationships get stronger. Manish tells Harshavardhan that they call him chief. Kairav warns Harshvardhan to be careful of Manish. Parth says that finally Harshvardhan got someone similar to him. Goenkas too gets shocked seeing Harshvardhan and Manish dancing together. Manjiri says Aarohi looks sweet. Mahima says Aarohi is looking tired. Aarohi says that to become the best, she was studying the whole night. Neil thinks he will find out what Aarohi is hiding. Parth asks about Akshara. Kairav says Akshara will come soon as she has gone to see an urgent case of a kid in an NGO.

Harshvardhan rudely asks if some emergency cases arrive in music therapy work too. His words shock and anger Goenaks and Birlas. Manish asks Harshvardhan to forget Akshara and dance with him. Harshvardhan gets scared and leaves making excuses for improvement work. Manish asks Kairav, Vansh and Akhilesh to see how he will again and again pull Harshvardhan’s leg in the engagement function. Vansh gets mesmerized to see Reem when she offers him a drink. Kairav notices this. Nishtha goes to bring Abhimanyu downstairs. She tells Abhimanyu that Akshara will arrive late. Nishtha leaves asking Abhimanyu to come downstairs soon.

Abhimanyu calls Askhara on landline and asks her if she is crying? Akshara says she is busy. He asks Akshara to end her act and reach his house soon. Abhimanyu tells Akshara that he wants to share his pain of love with her. He asks Akshara to reach his house in half an hour. Akshara cries and thinks she doesn’t want to attend Abhimanyu and Aarohi’s engagement. Abhimanyu thinks Akshara will have to come, as his engagement cannot happen without her. In the next episode, Nishtha will announce Abhimanyu and Aarohi’s dance. Aarohi will ask where Abhimanyu is? Abhimanyu will reach Goenka house and will forcefully make Akshara sit on his bike.

Reviewed Rating for Yeh Rishta 4th January 2022 Written Update Love compels: 5/5 This rating is solely based on the opinion of the writer. You may post your own take on the show in the comment section below.