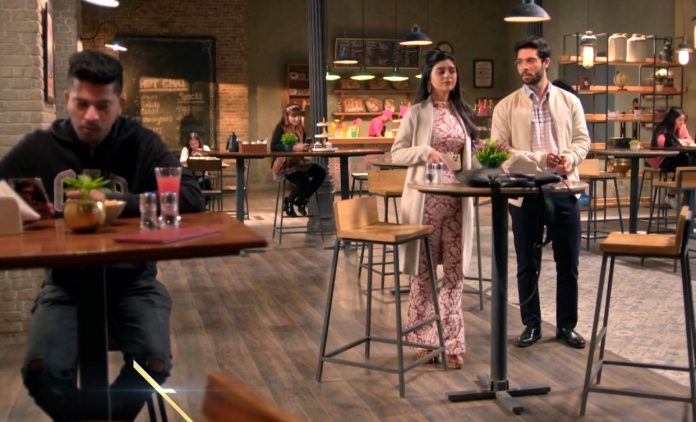 Kabhi Kabhie Ittefaq Sey 3rd February 2022 Written Update Gungun calls Anubhav. Neeti checks her call. Golu tells that the girl would be a secret admirer. He teases Anubhav. Neeti tells that Gungun is the secret admirer, who likes Anubhav but doesn’t admit. Golu asks Anubhav did they exchange numbers, how did the matter reach here. Yug also questions Anubhav. Anubhav tells that they would have saved it. Neeti asks him to check if the number is saved in speed dial also. Anubhav tells that he will delete the number from his phone. He takes the phone and disconnects Gungun’s call. Gungun gets angry and yet says she doesn’t care. Anubhav tells that he didn’t disconnect it intentionally.

Golu and Yug ask Anubhav not to fight with her. Anubhav tells that he will fix the time and tell her, he is busy because he has a job, he isn’t useless like her. Gungun jokes on his 9 to 5 job. He refuses to meet at 8pm. She continues to pester him. He tells that she doesn’t know about college timings. She tells him that she has to talk something important. He realizes that she wants to talk about marriage. He asks her to tell him the address. She asks him to be there on time, she doesn’t like to wait. He tells that he won’t wait for her either. She fixes their first date for a big reason, that’s to get a marriage deal signed by him. Anubhav reaches the café and waits for her. Gungun comes late and gets to hear a lecture from him. He tells that those who can’t wait for someone, has no right to make someone wait. She asks why did he wait for her, he should have left. He tells that he isn’t ill-mannered like her, his family has taught him good manners. She asks him if its his manners to humiliate a girl. He tells that she fights a lot. He asks her why did she call him. She tells that she is ready to marry him, but it doesn’t mean that she will spend her entire life with him. He asks her what will he do.

She tells that she will come first in BA next year and then break their marriage. He happily asks her to keep the promise. She tells that she wants his sign on the statement she prepared, it’s a deal that their marriage will be over after a year when she comes first in her exam. He signs the paper and clicks its picture also. He tells that he knew it that she will talk of breaking the marriage, so he came prepared and also got a chocolate for her. she tells him that even she got a chocolate for him. They both challenge each other that they will make the other person ask for divorce first by torturing each other. Who will win? Will they fall in love? Keep reading.

Reviewed Rating for Kabhi Kabhie Ittefaq Sey 3rd February 2022 Written Update: 5/5 This rating is solely based on the opinion of the writer. You may post your own take on the show in the comment section below.