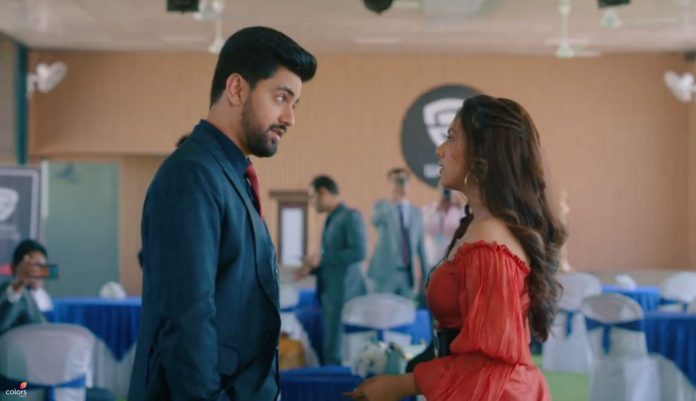 Fanaa 10th February 2022 Written Update Guilt Trip Pakhi asks Agastya to take rest. She tells him that she will shoot him if he steps out of his bed. Agastya feels happy with Pakhi’s care towards him. Pakhi and Agastya’s grandmother makes Agastya lie on the bed. Agastya’s grandmother thanks Pakhi for coming and helping her. She tells Pakhi that she went blank in fear. Pakhi tells Grandmother that the universe had to hear her prayer as she is the universe’s favorite child. She says it’s good that the bullet left touching Agastya’s shoulder otherwise he could have been injured badly.

Pakhi questions Agastya what he was doing with the rifle. She asks Grandmother to throw away Agastya’s hunting rifles in a drain. Pakhi also asks grandmother why she allows careless Agastya to play with such dangerous toys. She asks Agastya if he has any idea about what would have happened to him if the bullet would have got hit here and there in his body. Agastya sarcastically says the bullet would have hit his heart instead of his shoulder. Pakhi and grandmother sees Agastya in shock and anger. Grandmother asks Agastya to not joke about such a serious thing. She goes to bring food for Pakhi and Agastya.

Agastya asks Pakhi about Ishaan’s condition. Pakhi tells Agastya that Tanya told her that Ishaan got discharged. Outside the hospital, the hoodie man intentionally collides with guilty Tanya and stops her from telling the truth to Ishaan. Tanya gets scared seeing the hoodie man. As the hoodie man leaves, Tanya again blames herself for Ishaan’s injury. Ishaan tries to calm Tanya and tells her that it’s fine. He asks Tanya about Agastya’s condition. Tanya tells him that Agastya is fine and out of danger. Ishaan relaxes and tells Tanya that he has to reach home as his father and brother would be tensed about him.

As Ishaan leaves, Tanya feels very apologetic towards Ishaan. The hoodie man takes her aside and gives her a chocolate to eat. He asks Tanya to never listen to her conscience as it would lead her and her mother to death. On the other hand, Ishaan’s father examines his injury. Ishaan gets into a cute brotherly argument on food with his brother. Ishaan’s brother tells Ishaan that he is showing an attitude like a beautiful woman will come and feed him food with her hands. He gets shocked on seeing Pakhi at the door. Ishaan’s father also looks shocked. Ishaan asks Pakhi if she got his address from hospital records. Pakhi asks Ishaan if he is feeling any pain or is fine now. Ishaan jokes saying, “Mard ko Dard nahi hota Pakhi”.

He brings Pakhi inside and introduces her to his father and irritating brother Shubham. Ishaan tells his family that he went to meet Pakhi when the pole hit him. Ishaan shuts Shubham when he asks Pakhi if Ishaan meets her daily. Pakhi feels shy. Ishaan takes her to his room. Ishaan’s father and brother wonder about Pakhi and Ishaan’s relationship. Pakhi asks Ishaan to rest and not elevate his pain. She asks Ishaan if he is angry that she had to go to Agastya leaving him. On the other hand, Agastya is seen happily dancing. Fanaa-Ishq Mein Marjawan title song plays in the background. Grandmother tries to stop him from elevating his plan.

Agastya tells his grandmother that he got to know that Pakhi loves and cares for him more than she loves and cares for her two- day love. Grandmother gets shocked and also gets lost into thoughts. Agastya jumps in joy saying, “I won Dadi”. At Ishaan’s home, Ishaan tells Pakhi that nothing should be more important than friendship, not even love. Pakhi says that it’s difficult to choose between love and friendship. She says she hopes that the universe never puts her in a situation where she will get forced to make a choice between her best friend and love. At Agastya’s home, grandmother tries to explain to Agastya that his false consolation will give him very much pain.

She tells him that Pakhi loves him a lot but as her friend. Agastya gets angry and says Pakhi would have to learn to love him. He says he would make Pakhi learn to love him if she doesn’t learn herself. Agastya says firstly he has to make Pakhi realize that loving Ishaan is her biggest mistake. Grandmother gets afraid about the future, seeing Agastya’s anger. On the other hand, Ishaan’s brother brings food for Ishaan. Ishaan jokes and Pakhi says she will feed Ishaan. Ishaan’s brother leaves his room. Ishaan tells Pakhi that after his mother’s death, he has only his brother and father as his family. He feels pain while shifting ahead to have food. Pakhi scolds Ishaan for being impatient. Ishaan feels good with Pakhi’s care towards him.

Pakhi tells Ishaan that she would scold him sometimes. Ishaan tells Pakhi that he feels good when she scolds him with full rights. He asks Pakhi to not feel guilty anymore. Ishaan holds Pakhi’s hand and examines her. He tells her that her heart rate rises when she spends time with him. Ishaan tells Pakhi that he doesn’t feel insecure with Agastya as he has her increased heart rate as a proof of her love for him. Pakhi gifts Ishaan a smartwatch and makes him wear it. She also wears another smartwatch and sends her heart beat/rate to Ishaan’s smartwatch. Pakhi asks Ishaan to find himself in her heartbeat whenever she would send it to him. She tells Ishaan that this way he would never have a reason to feel insecure.

Ishaan calls Pakhi a filmy woman. Pakhi feeds food to Ishaan with love. The hoodie man will see a contact named “chipku” calling Natasha on her phone. He sees a device through which anyone one can change their voice. Hoodie man calls Agastya a genius for inventing such a device. He thinks Agastya can become the richest person by selling voice changer devices in the market but he instead keeps all good things for himself. Hoodie man puts the voice changer device on his throat. He talks to chipku in Natasha’s voice. Chipku gets shocked to know that Natasha is going to London for some days. He wonders why suddenly Natasha is going to London. This Chipku is revealed as a police officer named “Shahenshah”.

Shahenshah’s junior unravels that Shahenshah is tense because Natasha isn’t picking up his call again. Shahenshah tells his junior that Natasha doesn’t understand his love for her. He asks his junior if he looks so bad. Shahenshah’s junior praises his looks and calls him a filmy hero. Shahenshah wonders when will Natasha consider him as a filmy hero. He also decides to find out why Natasha suddenly left for London. Next morning, Mr. Singhania scolds Pakhi for not bringing Agastya to his event. Pakhi apologizes to Mr. Singhania, and tells him that Agastya is not in a condition to attend the event. Angry Mr. Singhania accuses and scolds Pakhi for lying about knowing Agastya for years.

Pakhi gets impressed with Aagstya’s kind fake gesture. The event host introduces Agastya to the guests and praises his success. Agastya keeps looking at Pakhi lovingly ignoring everyone and everything. He gets shocked and scared when the host requests him to inaugurate the function/event by lighting a diya. Agastya’s fears grow and he starts feeling uncomfortable seeing a staff member bringing a burning candle near him. He stands up and starts running away scared. Everyone gets shocked seeing Agastya running away. Agastya leaves the venue before Pakhi reaches him. Pakhi feels confused and worried for Agastya.

Agastya reaches his home and gets into his bathtub recalling his bad past. Flashback shows little Agastya screaming and asking his mother to save him. He can be seen stuck in a burning house. Agastya even fails to receive Pakhi’s call in his fear. He submerges himself in the bathtub filled with water. Grandmother gets shocked and scared seeing Agastya submerged inside the bathtub. She asks Agastya to share his problem with her and takes him out of the water. Grandmother hugs Agastya and tries to calm him. Scared Agastya tells his grandmother that he got scared with fire all around him and also felt suffocated. Grandmother tells Agastya that she won’t leave him alone ever. She blames herself for leaving little Agastya alone on the night of the fire incident in Agastya’s childhood Grandmother blames herself for Agastya’s present condition and fear.

Reviewed Rating for Fanaa 10th February 2022 Written Update Guilt Trip: 3/5 This rating is solely based on the opinion of the writer. You may post your own take on the show in the comment section below.