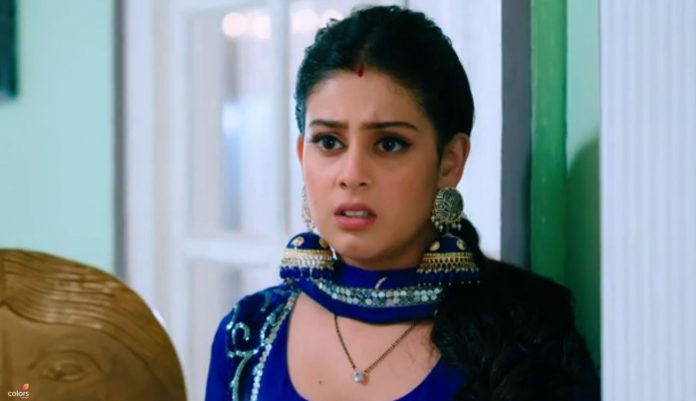 Udaariyaan 16th February 2022 Written Update Desperate Jasmin Fateh decides to end Jasmin’s drama by surrendering to the police and save Amrik’s future. He doesn’t want Jasmin to get more chances to insult Khushbeer and family. He can’t tolerate Jasmin’s threatening. He has well thought about his decision. He speaks to his family about his shocking decision, while the family opposes it sternly. They are sure that Fateh and Tejo can find a solution to Jasmin’s problem. Fateh has no patience left after Jasmin ordered Amrik to slap Khushbeer. He tells that he can’t live such a life when he finds his family threatened. He wants to go to the jail and save his life from Jasmin. Tejo suspects that Jasmin is hiding something. She thinks the accident is fake, but Fateh doesn’t think the same.

Fateh tells that they have no proof against Jasmin. The family doesn’t want Fateh to go to the jail when Amrik has married Jasmin and sacrificed his life. Fateh threatens of dying if the family doesn’t let him go to the jail by accepting Amrik’s blame. He asks Gurpreet to not make him swear to stop. He knows that his family will find his decision right very soon. He tells them that he doesn’t want Tejo to waste her life in solving their house problems, he wants Tejo to move on in her life. He feels Jasmin wants revenge on him, once he goes to the jail, she will stop troubling everyone. He declares that he will accept the blame and save the entire family from Jasmin’s evil. Fateh sticks to his decision.

He expects the family to support him. Jasmin has really lied about the accident. She doesn’t want Fateh to go to the police station and find out her plans. She thinks to stop Fateh some way. She invites Buzo’s parents home. She tells that Simran and Buzo’s marriage should happen soon. Gurpreet tells that she will begin the marriage preparations. Fateh tells that he has to go right away, its important. Jasmin threatens him about Simran’s happiness. She tells that his stubborn decision may lead to cancellation of Simran’s marriage. Fateh gets raged knowing Jasmin’s plan of stopping him from going to the police. Jasmin doesn’t want Fateh and Virks to know her actual planning. Will Tejo find out Jasmin’s huge lie and expose her? How long will Jasmin’s revenge drama go on? Keep reading.

Jasmin invites Buzo’s parents home and then informs the Virks that she has called them home to fix Simran and Buzo’s alliance. She tells them that now Amrik has got married and people would ask more about Simran’s marriage. She asks the families to fix the alliance and get ahead with the marriage functions. Buzo’s family has no problem with it, while Virks get into dual thoughts. Virks aren’t sure that they can keep the marriage happening in a good way, when Jasmin is there to trouble them. Buzo’s family thinks its the best time to get Buzo and Simran married. They ask Khushbeer to agree. Jasmin emotionally blackmails Gurpreet about Fateh. She tells that she has called Buzo’s parents to fix the marriage just to save Fateh from going to the jail, just like Gurpreet wanted to happen. She asks Gurpreet to agree with her if she wants to see her son in the house. Gurpreet and Khushbeer get worried for Fateh, and agree to keep the marriage functions.

They don’t want any more problems for Simran. Jasmin asks them to fix the date soon, and now Fateh won’t be going anywhere when he has a responsibility of his elder sister’s marriage. Fateh gets helpless. He wanted to go to the police station and surrender by accepting the blame, to put an end to Jasmin’s drama, but Jasmin plans otherwise. She makes sure that the family doesn’t let Fateh go away. She asks Fateh if he still wants to go by neglecting Simran’s marriage and happiness. Fateh is compelled to stay back. Jasmin dances with the family, while vowing to never let Tejo and Fateh unite. She wants to torture Fateh even more. She can’t let him go to the jail and save his family from her revenge fire. She wants Fateh to suffer. Tejo wants to find a proof against Jasmin in Amrik’s case and expose her. She thinks its good that she also bought some time and Fateh won’t be going to the jail. Tejo and Fateh make new plans to find out the evidences. They try to steal Jasmin’s phone and trick her.

Fateh can’t believe that his family has given up to Jasmin again. The family wants Simran to get married. They also want Fateh to stay with them. They ask Fateh not to consider going to the jail now. Jasmin mocks Fateh that she loves to see him suffer this way. Fateh vents his anger by hurting himself. Tejo stops Fateh and calms his anger. She tells him that the family wants him to be at home and he should think positive that they got time to find a proof against Jasmin. Fateh alerts her of Jasmin’s plans, saying Jasmin never does any good unless her motive is involved. He suspects Jasmin’s intentions behind keeping the marriage functions.

Tejo tells that Jasmin may act smart and play a new game with them, but this time they will also get involved equally and play fair with Jasmin to make themselves win. She asks him not to have any tension and think of their victory. She encourages him to fight Jasmin and defeat her. Fateh gets glad that Tejo is with him. Fateh goes home and finds Jasmin hurting Simran’s sentiments by reminding the past. He asks Jasmin to never mention the past again. Jasmin lets the family make arrangements. She plans to go out with Sweety to explore a new cafe. Tejo overhears this and makes a plan with Fateh to nab Jasmin’s phone. Fateh, Tejo and Mahi fool Jasmin and get the phone from her.

They check Jasmin’s phone, but don’t find any video or pictures to delete. Jasmin gets more cunning and suspects them to be doing something behind her back. She jokes on Tejo that the latter isn’t able to control her feelings on seeing Fateh in front of her and still distant. Jasmin tells that she will never Tejo do her wishful. Tejo replies that she isn’t scared of Jasmin, and Jasmin can never come between Fateh and her. Jasmin realizes that her phone isn’t there in her purse, and questions them. What would happen now? Stay tuned.

Reviewed Rating for Udaariyaan 16th February 2022 Written Update Desperate Jasmin: 3/5 This rating is solely based on the opinion of the writer. You may post your own take on the show in the comment section below.