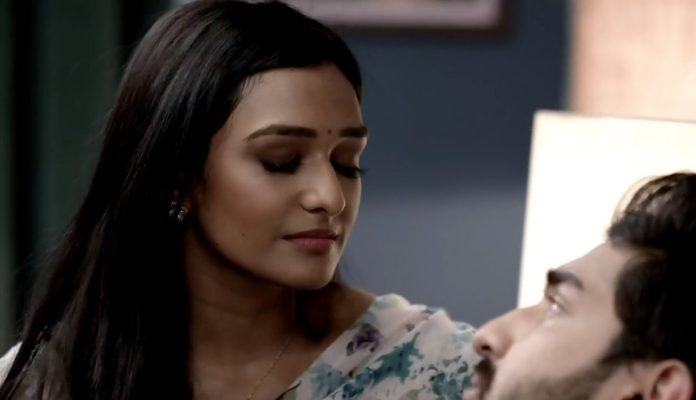 Bhagya Lakshmi 7th March 2022 Written Update New storm Rishi tells Neelam that he got to see her face first when the robbers asked him to close his eyes and think of the one he loves the most. Neelam gets pleased. Malishka asks Rishi about herself, if he didn’t think of her. Rishi recalls that he has seen Lakshmi instead Malishka. He tries to realize that he loves Lakshmi. Shalu asks Lakshmi to tell the truth that she loves Rishi. Lakshmi is speechless. Karishma tells Kiran that they have to get Rishi married to Malishka before Lakshmi changes her mind and comes back to him. Sonia tells that they have to convince Neelam to accept Malishka as her Bahu. Kiran also agrees with them. She wants Malishka’s happiness. Rano learns from a neighbor that a man had visited Rano’s house at night and was eyeing the girls. Rano and Lakshmi wonder what is she saying until Balwinder comes there to shock them. A new storms in Lakshmi’s life in the form of Balwinder. What will Lakshmi do now? Keep reading.

Earlier in the show, Rishi tells that Lakshmi was with him. Neelam and Virender get worried. Rishi adds that Lakshmi held his hand and he felt a current shock, she had awakened him and then she left. Lakshmi tells Ayush that she loves the family a lot. She requests him to not tell anyone about her feelings. He tells that everybody should know that she is a nice person. He adds that he will tell the world that she had visited Rishi by forgetting the past. She asks him to just keep it to himself. She trusts him. She knows that he won’t break her trust. He agrees to her. Rishi tells Malishka that Lakshmi was just here with him.

Malishka tells Rishi that she was with him, she has awakened him. Rishi tells that he remembers that Lakshmi was with him, she has awakened him, she held his hand too. Ayush is glad that Rishi remembers it well. He doesn’t want to break Lakshmi’s promise and keeps silent. He knows that Lakshmi has saved Rishi’s life once again. Rishi insists to go home. The family asks him to recover well in the hospital. Rishi tells that he wants to go home and stay in his comfort zone. Ayush and Malishka ask Virender and Neelam to take Rishi home. Ayush happily hugs Rishi. Rishi asks him about Lakshmi. Ayush replies that she is really good.

Someone sees Lakshmi on the road, and follows her to her home. Shalu looks for Lakshmi. She calls Ayush to know about Lakshmi. Ayush tells that Lakshmi will return home soon. He gives the good news that Rishi is okay. She understands that Lakshmi was with Rishi. He tells that he didn’t tell her anything, but she understood it. He feels glad to talk to her. He asks her to take care of Lakshmi. She asks him to take care of Rishi. She knows that Rishi and Lakshmi are soul mates, Lakshmi loves Rishi a lot and he will soon know that nobody can love him so much. Lakshmi returns home. She apologizes that she went out without informing anyone. She tells that she had gone to see Rishi, after her nightmare about Rishi’s life. She adds that she got a big relief seeing Rishi. Shalu asks her if she loves Lakshmi. She wants to know the truth.

Neelam gets emotional when he tells that he loves her the most. He tells that he recalled the family after her. Malishka asks him if he thought of her. Rishi remembers that he had seen Lakshmi. Lakshmi tells Shalu that she loves Rishi a lot, he is a good soon and a good brother, but he loves Malishka. She doesn’t want to come between Rishi and Malishka.

Lakshmi takes care of her sisters. She misses Rishi. Rishi coughs at the same instant when she calls him from heart. He doesn’t answer Malishka. Neelam asks Rishi to take rest. Malishka tells Rishi that she loves him a lot. She goes with Neelam. Virender tells that he is jealous and angry that Rishi loves Neelam the most. Ayush tells that Rishi doesn’t love him, he is also jealous. They also make a leave and let Rishi spend time alone. Rishi recalls Lakshmi’s words. Rishi deeply misses her. Balwinder goes to see Lakshmi from the window. He leaves when a neighbor spots him. Karishma and Sonia talk to Kiran. They defend Rishi. They tell that Rishi loves Malishka. They are glad that Neelam hates Lakshmi now. They also hate Lakshmi, and don’t want her to come back. Malishka meets them. She tells that Rishi doesn’t love her.

She tells Kiran that Rishi has just missed Neelam, instead her. Kiran tells that its good that he missed his mom, not Lakshmi. She tells that nobody can compete with parents. She feels that Rishi loves Neelam and is a good son, it’s a good thing. She asks Malishka not to worry, her place is secured in Rishi’s life. Karishma tells that Lakshmi isn’t interested in Rishi life, she had been rigid to refuse to Neelam. Malishka thanks them for always supporting her. Sonia happily hugs her. Neighbor alerts Rano of the unknown man, who was eyeing the girls from the window. She tells that he had run away before she could catch him. Balwinder arrives there to meet Rano. Lakshmi is shocked to see him.

Reviewed Rating for Bhagya Lakshmi 7th March 2022 Written Update New storm: 5/5 This rating is solely based on the opinion of the writer. You may post your own take on the show in the comment section below.