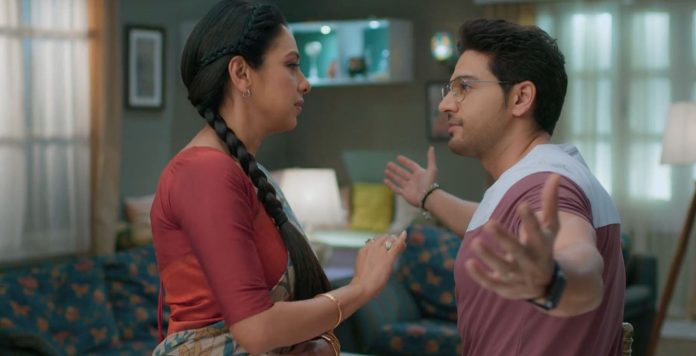 Anupama 7th March 2022 Written Update Twist for Anuj Shahs and Anupama are seen discussing Kinjal and Paritosh’s baby’s name. Pakhi comes, hugs and apologizes to Anupama for not being able to attend her birthday party. Anupama forgives Pakhi and asks her about her friend’s mother’s present health condition. Pakhi replies that her friend is fine now and will get discharged the next day. She asks Samar, who is Papita Shah. Baa tells Pakhi that she is going to be an aunt. Pakhi gets excited and says she will keep the baby’s name. Paritosh comes outside. Pakhi excitedly congratulates him.

Paritosh gets angry and asks Pakhi to shut up. His behavior shocks everyone. Kinjal comes there and requests Paritosh to not escalate the matter as they were discussing. Paritosh tells Kinjal that they have discussed enough and nothing remains private in Shah house, their fight also can’t remain hidden. Anupama and Vanraj ask them why they were fighting. Paritosh reveals to his family that he doesn’t want to have a child at this time. His revelation shocks everyone. Kinjal reminds Paritosh that they planned a baby as he also wanted it. Paritosh says he didn’t think this through back then but later he mediated over his decision.

He also says that after thinking a lot about his decision and realized that his family planning was wrong for the present time. Kinjal angrily tells Paritosh that it’s not Goa planning that can be changed anytime. She says it’s the real life of their and their child. Paritosh asks Kinjal if she wants him to suffer whole life for his one wrong decision. Baa asks Paritosh what he is saying. Paritosh requests Bapuji to hear him out once, before labeling him as heartless or villain. He says that real life isn’t easy like tv and films (reel life) and children take years to grow. Baa asks Toshu if he is saying that they don’t know this.

He says all relatives like grandparents, aunt, brother and sister just play with the kid but actual kid raising up responsibility remains with the parents. Kinjal tells Paritosh that they will raise their kid, what is the problem. She explains to Paritosh that people living abroad too manage their children without their family, house help and focus on their careers as well. Kinjal asks Paritosh if people living abroad can manage, why can’t they? as they have a nice family, resources and everything. Paritosh tells Kinjal that he is ready for such a big emotional responsibility. He also tells Kinjal that he has grown mature enough to think about someone else before making a decision pertaining to his life.

Paritosh tells everyone that he may seem or sound wrong at this time. He requests everyone to understand that he won’t be able to become a good father at this time. Paritosh says he won’t be able to give his child the attention and time he/she deserves. Paritosh says he is just saying to delay baby planning as he and Kinjal are young and have much time left for family planning. Paritosh says right now he wants to grow in his life and become something, so that his baby won’t feel a lack of anything in this world. He apologizes and says that he doesn’t want to struggle like Vanraj in this age. Paritosh’s words shocks everyone.

Paritosh says he won’t take the upcoming child’s responsibility, if he/she comes into this world. This shocks everyone to the core. Paritosh tells Kinal that even she shouldn’t become a mother so early as children stop their parents growth. He says kids/children become shackles and stop their parents from growing further. Anupama asks Paritosh to stop. Vanraj asks Paritosh to not say something in his tension that he may regret in future. Vanraj explains to Paritosh becoming a father doesn’t stop life but instead is a beginning of the most beautiful chapter of life. Anupama tells Paritosh that they want to force their opinions on him but just wants him to think about everything with a cool mind.

Paritosh tells Anupama that he has given everything a lot of thinking and also understood what he needs to do. He again shocks everyone saying that he doesn’t want this baby. Bapuji explains to Paritosh that children are parents’ inspiration to grow further. He says Vanraj is putting a lot of effort for the sake of his children’s future. Baa tells Paritosh that he has grown in her lap more than in Anupama’s lap. Vanraj explains to Paritosh that life can’t be divided into discrete parts that he will work first and then have kids. He says everything functions at the same time in life, both career and family. Anupama and Baa ask Paritosh and Kinjal to not fight instead make a decision with a cool mind, taking God’s name.

Later, Anuj is seen making halwa for Anupama in happiness with poetry. Anupama returns and Anuj understands her tension. He gives water to Anupama and offers her the halwa he prepared for her. This makes Anupama feel good. Anuj makes Anupama eat with his hands. He asks Anupama if she is fine. Anupama tells Anuj that she is feeling sacred. Anuj asks Anupama what happened. Anupama recalls Paritosh and Rakhi’s words. She tells Anuj about whatever happened and how she is feeling petrified. Anuj tells Anupama that everything will get sorted with time. Anupama tells Anuj that Kinjal and Shahs will now need her more than earlier. Anuj shows understanding expressions.

She opens the door and Anuj sarcastically asks Anupama to give him something. Anupama sarcastically asks Anuj what type of neighbor he is who comes daily and asks for something. Anuj unintentionally hurts Anupama saying that he is asking for small things as he isn’t getting what he actually wants. He realizes his mistake and apologizes to Anupama. Anupama apologizes to Anuj for Initially rekindling his hope and then shattering it. Anuj tells Anupama that he wants curd because he wants her to feed him curd and sugar. Anupama asks why. Anuj tells Anupama that he has a very important meeting today and is thinking of resuming his work. This makes Anupama happy. Anuj says to Anupama that their marriage would have been delayed so that he could have restarted his work.

Anupama tells Anuj that she doesn’t know about the delay but is sure that he will succeed in whatever he will do. Anuj tells Anupama that he will succeed because she is with him. Anupama goes to bring curd and Sugar as Anuj asks her to feed him curd and sugar. At Shah house, Baa and Bapuji tell Kinjal that how can Rakhi send cold drinks for her in her pregnancy time as it isn’t good for health. Kinjal explains to Baa and Bapuji that Rakhi sent her nutritional water, not cold drink. Samar and Kinjal explain to Baa that alkaline water is drunk by many celebrities as it has a lot of advantages. Baa explains to everyone that simple water, coconut water and water stored in copper utensils are very beneficial for health.

Kinjal again explains Baa the benefits of minerals in alkaline water. Baa finds Alkaline water fine in taste. She gets shocked to see that Alkaline water costs 540 rs and says even clarified butter (desi ghee) costs cheaper than this. Everyone laughs seeing Baa getting worried about alkaline water’s expenses. Vanraj notices Kinjal’s worry and asks her what happened. Kinjal says nothing. Vanraj tells Kinjal that Paritosh will get better with time. He assures Kinjal that he and Anupama are always with her. Vanraj asks Kinjal to not think about Anupama’s busy schedule and give her a call whenever she will need her. He says Anupama will come and has to come. This will make Kinjal feel bad for Anupama.

On the other hand, Anuj eats curd and sugar from Anupama’s hand and flirts with her. He sees Anupama upset and tries to cheer her up. Anupama tells Anuj that she never thought that she would have a person who would love her unconditionally in this life. Anuj tells Anupama that nobody, nothing and he himself won’t be able to measure his unconditional love for her. Anupama asks Anuj to promise her that he will once again become old Anuj Kapadia. She tells Anuj that she will set the world on fire, if anyone will call him defeated. Anuj feels a little good. Anupama asks Anuj to win this world once again for himself and for others who got hurt but couldn’t get back on their feet. She asks Anuj to prove himself to this world.

Anupama tells Anuj that she wants to see him back on his throne as that place belonged to him, belongs to him and will always belong to him. She tells Anuj that she can’t stand to see anyone else in his place. Anuj smiles hearing Anupama’s words. He tells Anupama that he will give his everything to prove himself to everyone for her. Both Anuj and Anupama give each other a cute smile.

In the next episode, Anuj will save Anupama from falling in the dance academy. He will ask Anupama if she made him her partner without any investment. Anupama will tell Anuj that they should celebrate his first step towards success. She will ask Anuj to go on a date with her. Before Anupama and Anuj could leave for their date, Kinjal will reach them. She will ask Anupama if she will accompany her to the doctor as she is feeling scared to go alone. Anuj and Anupama will look at each other. Kinjal will notice their expressions.

Reviewed Rating for Anupama 7th March 2022 Written Update Twist for Anuj: 5/5 This rating is solely based on the opinion of the writer. You may post your own take on the show in the comment section below.