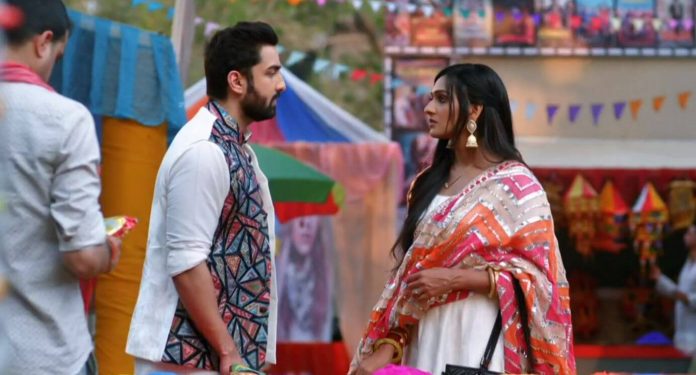 Bhagya Lakshmi 13th March 2022 Written Update Rishi Lakshmi Holi Malishka wishes Dadi happy Holi. Dadi asks her to just apply Tilak and have respectful Holi. Sonia and Malishka hug and wish each other. Rishi tells Dadi that the girls are already mad and don’t need Bhaang to go mad. He asks Dadi to get ready for the Holi party at the Kohlis. Dadi tells that she doesn’t play Holi. Dadi fakes a heart attack. Rishi applies Tilak to Dadi and wishes her. Ayush compliments Dadi. He tells her that she looks really lovely. Dadi tells that she will not leave him. Ayush collides with Karishma. Dadi applies holi to her daughter and wishes her. She tells that she will take Ayush’s revenge vented on Karishma. Rishi tells that he has go to Kohlis. Malishka asks him if he will leave her alone and go.

Kiran asks Malishka to go along Rishi. Rishi agrees to take her along. He commits to Kohlis that he is coming for the party. Malishka tells Rishi that she doesn’t want to leave him alone on Holi. Ayush guesses that Rishi is waiting to meet Lakshmi. He finds Rishi lost in thoughts. He finds Lakshmi at the holi stall. He asks Ayush to see Lakshmi there. Ayush lies to keep Malishka calm. Rishi also changes his words in front of Malishka. Ayush asks Rishi to go and buy some colours, because they are going in a holi party. Rishi rushes to see Lakshmi.

Ayush blocks Malishka. Rishi meets Lakshmi and asks her if Rano scolded her that day. He wishes her happy holi. Malishka catches Rishi’s lie. She goes to see Rishi and finds him with Lakshmi. Lakshmi wishes Malishka happy Holi. Malishka asks Rishi did he buy colours for her. She tells that Rishi will play holi with her first. She insults Lakshmi. She kisses Rishi in front of Lakshmi. She asks Rishi did he feel bad like he made her feel bad by lying. They get into an argument. She threatens of informing Neelam. Ayush asks them to forget the fights. Rishi, Ayush and Malishka reach the Holi party. Malishka introduces herself as Rishi’s would be wife.

Rhea and Malishka compliment each other. Rishi tells that he wants to be reminded of Holi, because there are no colours. Aaliya tells that they will have colours soon. Malishka tells them that she is soon going to marry Rishi. Rishi looks upset. Ranbir notices him. Ayush cracks jokes in excitement. Ranbir borrows Rishi for a man to man talk. Ayush wants to go along, because he is also a man. Rishi asks Ranbir the matter. Ranbir asks him about the odd thing. He asks Rishi to marry the person he loves and listen to his heart. He tells that he has understood his heart longing for someone else. He advises Rishi to not marry Malishka.

Ayush hugs Ranbir happily. He thanks Ranbir for saying the right thing which he wanted to say Rishi. He tells that Rishi has someone else in his heart. Rishi is speechless. Ranbir asks him to just marry the one he truly loves. Lakshmi meets Prachi because of Shahana. Shahana tells how Lakshmi saved her from the eve teaser. Prachi hugs and thanks Lakshmi for the big help. Lakshmi and Prachi bond well. Lakshmi agrees to stay in the holi party on their insistence. Shahana tells Prachi that she got the organic colours for her, and now Prachi doesn’t need to get afraid.

Reviewed Rating for Bhagya Lakshmi 13th March 2022 Written Update Rishi Lakshmi Holi: 3/5 This rating is solely based on the opinion of the writer. You may post your own take on the show in the comment section below.