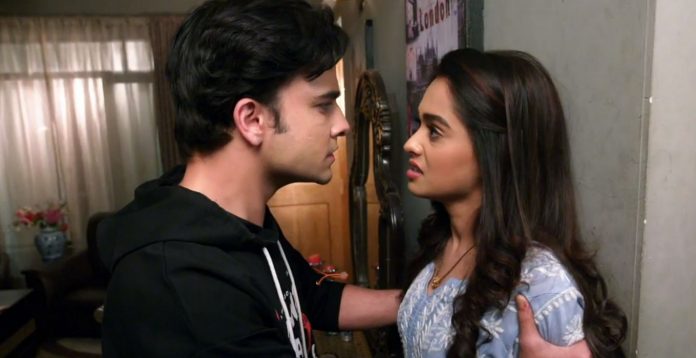 Kumkum Bhagya 22nd March 2022 Written Update Prachi bashes Ranbir Ranbir returns to his room and finds Prachi gone. Prachi comes from the washroom. Ranbir acts surprised to see her. He asks her what is she doing in his room. He tells that he was sleeping in the study room and didn’t know if she slept in his room. She asks him not to try to lie if he can’t lie, or not lie unless he is helpless. He asks her if her attitude is over. He wants her to not to behave cold. He asks her if she wants him to sit and think of her puzzling words. She comes straight to the point. She tells that she knows he slept in the room, not in the study room, because she can feel his presence. He asks her if she can really feel his presence.

He tells that its not a favor, but humanity, he wants her to get comfort. She tells that the biggest comfort zone for her was his arms, she used to feel safe, happy and protected with him, but not anymore. She tells that she gets uncomfortable by his touch now. He feels hurt by her rudeness again. He sadly withdraws his touch and gets away from her. Prachi leaves from his room.

He promises to give her peace and comfort which she wants from him. He wants to erase the blame on him, so that Prachi gets the same soothing peace by his touch again. Rhea meets Aaliya and tells her that Ranbir found out everything, he is trying to find a proof against her. Aaliya asks her to take a deep breath and calm down. Rhea gets afraid. She asks Aaliya not to take the matter lightly. Aaliya shuts the room. Rhea tells that her world will shatter if Ranbir learns her plans and secrets. She fears that Ranbir will leave her and go away. Rhea knows that Ranbir wants to find out his innocence.

Aaliya asks her not to trouble her by the negative talks. Rhea apologizes to her. She tells Aaliya that Ranbir was checking her room and lied that he was finding his shirt, its because of his suspicion. She adds that Ranbir doesn’t love her, he doesn’t want her to stay with him. Aaliya asks her not to overthink. Rhea tells that Ranbir lied to her, but she caught his lie. She thinks to check if Ranbir really has such white shirt which Pallavi gifted him.

Aaliya tells Rhea that Ranbir will try to find out who has fed him the thandai. The servant hears them and tells that Ranbir knows about Aaliya giving him the spiked thandai glass. Aaliya gets worried. Prachi vents out her anger on Ranbir. She tells him that she was proud of her husband, love and marriage, but he ended everything. Ranbir tells her that he will die but will never cheat her. She stops him from talking of death and slaps him. Ranbir holds his cheek and cries. Prachi also cries that she slapped Ranbir. Keep reading.

Prachi feels Ranbir has lied to her that he is a one-woman man, and changed her life. She gets upset. Dida and Shahana surprise her with the special breakfast. Prachi refuses to have it. Dida and Shahana insist her to sit and have food. Shahana tells Prachi that Ranbir’s drink was spiked on that day, and maybe he wasn’t in the state to do anything with Rhea. She tells that maybe Rhea is lying about her intimacy with Ranbir.

Shahana tells Dida that she wants to know Prachi’s opinion as well. Prachi recalls her argument with Ranbir. She wants to avoid the topic. She goes to meet Ranbir. Ranbir goes for a bath, while Rhea and Aaliya check his room for the white shirt. Rhea finds the white shirt in his cupboard. She tells that she got the shirt so easily, Ranbir wasn’t finding the shirt but the evidence against her. Aaliya asks her to talk in slow tone. Prachi finds Rhea and Aaliya in Ranbir’s room. She asks Rhea what is she doing there. Rhea asks her to talk to her first. Aaliya and Rhea try to brainwash Prachi against Ranbir. She asks Rhea to tell Prachi why she has come there.

Rhea tells that they are helpless to talk. She answers Prachi that Ranbir has gone for a shower, he was finding his white shirt, and she came to find it for him so that he gets happy. She tells the little secret that Ranbir was making excuses to get her attention. She makes Prachi jealous by telling her romance tales. Aaliya laughs. She asks Rhea not to tell in more details. Rhea angers Prachi by her disgusting talks. Ranbir comes from the bath. He finds them talking. Rhea tells that his shirt was in his cupboard, still he was making excuses to call her. She asks him was he finding the same shirt.

He confirms it and thanks her. Prachi gets angered and believes Rhea. Rhea and Aaliya leave from there. Ranbir asks Prachi the reason for her coming. Aaliya tells Rhea that its really bad if Ranbir is suspecting her. She wants to know how Ranbir got a doubt on her. Rhea tells that there are many things that can make him suspect her. They reach the kitchen area and talk about Ranbir who is finding about the bhaang drink. Servant tells that Ranbir was asking him, and he told that Aaliya handed over the drink to him. Rhea and Aaliya fume over him and ask him to get out. He tells that he will change his statement in front of Ranbir.

He asks them not to fire her. Aaliya asks him to leave for ten days and rejoin later. She doesn’t want Ranbir to question the servant again. She wants to check the room, if there is anything left. They rush to see the pills strip left as the evidence. Prachi tells Ranbir that she is trying to forget what he used to say, that he is a one-woman man. He tells that he is still a one-woman man. She asks him if he really believes so. He tells that he is saying the truth. She also suspects his character, like he had suspected her character before. He tells that he loves her and will always love her.

She asks him where does Rhea stand in his life. He tells that Rhea doesn’t matter to him, he just loves Prachi and will forever love her. She wants to trust him. She tells that she doesn’t want to get cheated by him. She adds that she came to meet him, but she came across Rhea. She tells how Rhea has shown her place, that she is the other woman in his life. She gets heartbroken. She calls Rhea his wife, as Rhea declared it. She fights Ranbir without listening to him. She tells that Ranbir has married Rhea. Ranbir calms her down. She feels she couldn’t face the truth, he is the reason that he ashamed her. She tells that he ruined her pride, she was earlier proud of him, but now she is ashamed. Prachi slaps him in anger. She doesn’t listen to any of his clarification and walks out.

Reviewed Rating for Kumkum Bhagya 22nd March 2022 Written Update Prachi bashes Ranbir: 4/5 This rating is solely based on the opinion of the writer. You may post your own take on the show in the comment section below.