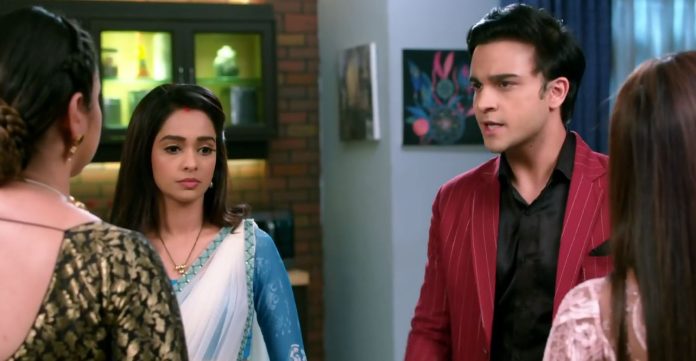 Kumkum Bhagya 30th March 2022 Written Update Miraculous Rhea vents anger recalling Prachi. She acts hurt and pushes Pallavi in anger. She tells Pallavi that she just fell down. Pallavi asks her the reason for the anger. Rhea tells that she has seen Ranbir and Prachi dining together and laughing. She asks why is Prachi with him, when Ranbir has married her/Rhea. She tells that Prachi is trying to snatch Ranbir from her. She calls it Pallavi’s fault. She tells that Pallavi didn’t control Ranbir. She asks Pallavi why is she behaving like there is nothing between Ranbir and Prachi.

She reminds that Prachi was with Siddharth in the hotel room, Ranbir has forgotten everything. She asks why did Pallavi forget it. She asks Pallavi to help her. She tells that Prachi was with Siddharth till now and came back to snatch Ranbir. She adds that she has fallen alone, her own sister is ruining her and she can’t see any ray of hope. Pallavi apologizes to her. She assures that she will tackle Prachi. Pallavi goes to rebuke Prachi. She tells Prachi that she is good in attracting men.

She reminds how she had attracted Siddharth and got into an affair with him. Ranbir calls it enough, while Prachi cries. He asks Pallavi not to say a word against Prachi’s character, about that night. He tells that Pallavi can’t point at Prachi’s character this way. Pallavi tells that Prachi has wronged him before and now even, she is fooling him, she is wrong. Ranbir tells that just he did wrong, he is wrong to marry Rhea. He tells that Prachi isn’t wrong, he is the person who wronged her life by marrying someone else. Rhea is left speechless seeing Ranbir taking a stand for Prachi against his mom Pallavi.

She finds Rhea right. She knows that Prachi is ruining their family respect. She assures that she won’t let Prachi ruin their respect. She asks Rhea to come along with her. Ranbir and Prachi are still in the kitchen. He tells her that he felt really good after having the food with her, her company gave him happiness, they had spent time alone without any third person. They get into a moment. He reminds her that they used to get into such moments. He asks her can they sit and talk without fighting. She tells that he has ended everything between them. She tells that they can have dinner and stay in the same room without talking. She asks him to go to his room.

He tells that she wants to stay with him and spend time. She asks him to clear the illusion, its of no use. He gets upset on hearing her rude comment, which breaks his hope. He tells that he has no control on his feelings when its about her, he tells his heart every day that Prachi doesn’t care for him, but his heart always wants to love her, even if she hurts him, he finds peace seeing her, the peace is much bigger than the pain. She asks him not to say anything such. He asks is she getting love for him or anger on her lie. He tells that he loves her a lot, so he tolerates all attitude and bad remarks. He holds her close and gets her into a moment.

He tells her that she can say him anything bad, but he will never step back, he will not let her step back, his heart will always keep her close. Prachi gets losing herself in his eyes. They get into a moment. She falls for him. Pallavi and Rhea break their moment. Pallavi asks Prachi when will she stop this drama. She asks what was Prachi doing with Ranbir. Prachi tells that she was having her food. Rhea tells that Prachi is just doing a drama, she is finding excuses to stay with Ranbir. She asks Ranbir not to encourage Prachi by forgetting the past. Pallavi asks Prachi to not start the same evil things again.

She tells that Prachi is playing games again, she wants to snatch him, she is planning to separate him from Rhea, she is trying to trap him, she knows to attract men, like she did with Siddharth. Ranbir asks him not to say anything about that night. He stops Pallavi from commenting on Prachi’s character. He regrets that he doubted Prachi. He tells that he regrets losing Prachi’s faith each single day. He adds that Prachi doesn’t trust him, she doesn’t want to talk to him, he finds chances to talk to her and win her faith, he is trying to trap her in love.

Pallavi tells that he is blind in love, Prachi is doing wrong with him. He calls his marriage with Rhea a mistake. He tells that he did wrong by marrying Rhea, he did injustice with Prachi. He wishes that he didn’t wish to make such a mistake. He tells that he apologizes to Prachi every day, but he didn’t get forgiven, he is ready to give her anything whatever he has earned, but he wants Prachi to forgive him. He tells Rhea that there is nothing between them, she shouldn’t pretend to be hurt. He tells Pallavi that Prachi hates him, she doesn’t want to talk to him, he is much hurt.

He asks Pallavi to know what her son wants, he wants Prachi back. Rhea leaves with tears in her eyes. Prachi looks at Ranbir emotionally. Rhea sheds tears in rage and ruins her room once again. Aaliya returns home and rushes to Rhea. She asks Rhea is she okay. Rhea tells that she isn’t okay. She complains about Ranbir, who loves Prachi so much that he can fight with Pallavi for her sake. She tells that she has just faced the truth, Prachi was standing silent, while Ranbir has eradicated her fears by supporting her. She narrates the entire incident to Aaliya.

She tells that Ranbir cleared that Prachi is everything for him, and she/Rhea is nothing, Ranbir loves Prachi when she hates him, Ranbir feels hurt when she doesn’t talk to him. She asks why doesn’t he think about her. She angrily shouts on Aaliya. She tells that they had to do something of Prachi. She is losing patience. She tells that she can’t take it anymore, she has to kill Prachi to remove her from Ranbir’s life. Aaliya is shocked to hear this. She tells that she will not tolerate Prachi now. Meanwhile, Vikram meets Dida. He tells that he came late, maybe Pallavi is angry. He asks her to come along. She asks him to go alone and handle his wife’s temper.

He tells that he doesn’t want Pallavi to beat him, so he wants his mum along to save him. She tells that Pallavi isn’t such evil to beat him. He thanks her for not helping him. She tells that she is just with the right person. He goes to see Pallavi. Ranbir asks Pallavi did she understand what he meant to say. He has made himself clear. Pallavi blames Prachi. She tells Prachi that she has built a wall between Ranbir and his mom. Ranbir asks Pallavi not to say anything to Prachi. Pallavi asks Ranbir if he is hurt to hear a word against his wife.

Reviewed Rating for Kumkum Bhagya 30th March 2022 Written Update Miraculous: 5/5 This rating is solely based on the opinion of the writer. You may post your own take on the show in the comment section below.