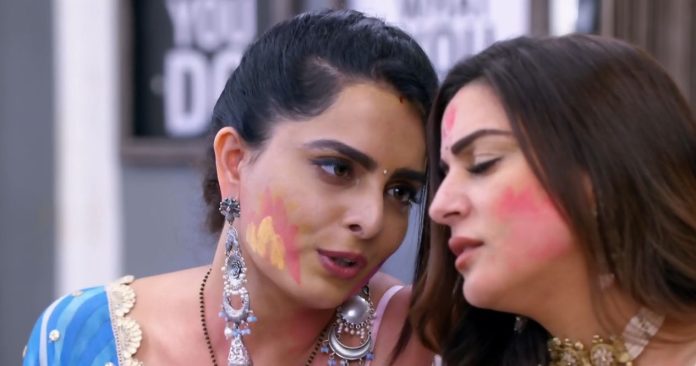 Kundali Bhagya New track 8th April 2022 Spoilers Kundali Bhagya upcoming track – Prithvi’s plan out Prithvi’s lawyer and jail inmate are intoxicated. They tell that Prithvi’s papers are very expensive. Preeta and Karan are also drunk. Preeta is confused and Karan asks them what kind of papers. The lawyer says that he has come to steal that only. Karan is shocked. Natasha tries to shut them up but he says that Prithvi has sent them to steal the papers. Preeta, Karan, Shirleen, and Kritika are shocked. In the drunk state they reveal that Prithvi doesn’t want Preeta to destroy the papers. Will Prithvi’s plan be successful? Will Shirleen turn the game against drunk Preeta and Karan?

Agastya gets up in the middle of the night and finds Pakhi missing. He struggles and gets out of his bed. Agastya sees someone and slithers on the ground. Pakhi’s hands are tied and her mouth is closed with tape. She also gets an injury on the forehead. Pakhi regains her consciousness and scuffles in pain. Is this Pakhi’s new plan to pester Agastya? Will Agastya come to know that Pakhi is behind his miseries?

Tejo goes to the police station and requests the inspector to ask her unlimited questions but not put Jasmine in jail. Angad is also at the police station with Tejo. The inspector tells Tejo to request Amrik to take back his complaint. He warns Tejo that if Jasmine doesn’t get bail by 11 tomorrow then she will be shifted to jail. Tejo is shocked. Angad suggests Tejo message Fateh. Fateh reads the message and says he is very helpless. A man comes to meet Jasmine in jail. Will Tejo be able to get Jasmine bailed out? Will Amrik take his complaint back?

Mannat asks the protestors who is trying to make them homeless. They mention that a man named Randhawa has snatched away their lands. Mannat promises them that till she is with them then nobody can snatch away their land or the soil. She challenges Mr. Randhawa that if his bulldozer takes one step ahead then her bulldozer will take two steps ahead. A small girl tells Kulwant that she will never be able to see her again. Kulwant runs behind the girl and faints on the ground. Will Mannat’s attempt help the homeless people get back their land?

A group of ladies drag Swaran out of the house and say that she spoiled Kanwaljeet’s name by not waiting for her sons on his last rites day. She is blamed for not following or caring about rituals and culture. Swaran tries to free herself but is helpless. The ladies’ gang accuses Swaran of killing Kanwaljeet. They try to remove Swaran from the colony but she holds on to the main gate of her house. A man throws a stone at Swaran Ghar. Swaran cries in shock. How will Swaran save herself and Swaran Ghar from the crowd?