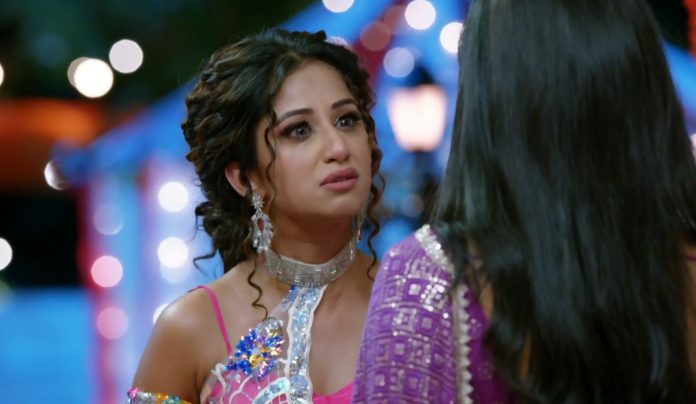 Bhagya Lakshmi 18th November 2022 Written Update Malishka plans self kidnapping Neelam assures Kiran and Abhay that Malishka is not weak and will be found. Kiran tells that they will get Malishka if lakshmi opens her mouth.Neelam tells that once she goes to Police station, then she will tell everyone. Shalu tells Bani that someone is trapping Lakshmi and doing this against her, but whom? Malishka is shown removing the mask and freeing her hands. She tells that she has planned her own kidnapping and trapped illiterate Lakshmi. Inspector asks constables to take Lakshmi. Lakshmi is shocked. Malishka says this time your Lakshmi bhagya will fail from me.

Earlier in the show, Kiran tells that Lakshmi is not trustable. Shalu tells that everyone will repent, whoever will know the truth. Kiran raises hand to slap her. Inspector stops her. Neelam asks Shalu to leave, and pushes her out of the house. Inspector asks Lakshmi to come with him. Lakshmi says I haven’t done anything wrong. Inspector requests her. Lakshmi asks Dadi to tell that she is innocent. She tells Abhay and Kiran that she is innocent and cries. She asks them to trust her. Inspector asks lady constable.

Malishka shouts for help and coughs, she is tied to the chair. Inspector brings Lakshmi to Malishka’s room. They find earring. Kiran tells that it is of lakshmi. Neelam confirms. Malishka shouts Lakshmi, why did you kidnap me? I just wanted to get Rishi and love him. She says I will not get Rishi. Everything is recorded in the camera, as per planned. lakshmi tells Inspector that she has not come here. kiran tells neelam that Lakshmi is lying. Neelam tells that she just lies. Abhay asks Inspector to take action. Inspector is sure that she has kidnapped her.

Bani thinks about Lakshmi’s call and gets worried. She asks God, why Lakshmi is in trouble always. She asks him not to give her pain. Shalu returns home. Bani asks if Di is fine? Shalu hugs her and cries. She tells that don’t know if God has chosen Lakshmi for all troubles or troubles for her. Bani asks what happened? Shalu tells that everyone has misunderstanding, they are thinking Lakshmi has kidnapped Malishka. Bani asks her to go and talk to Rishi, and save Lakshmi. Shalu tells that Neelam threw her out and she couldn’t save Lakshmi. Bani tells that she was fighting with God before she came here. Malishka frees herself and laughs aloud, appreciating self planning of her kidnapping. She tells that she has snatched back her Rishi and also Lakshmi’s freedom, as she will be in jail for half of her life. Balwinder appreciates Malishka for her clever plan. Malishka hopes Police found the earring, and tells that she has won and Lakshmi is out. She ays my Rishi will be mine again. Balwinder is happy thinking Lakshmi will become hers.

Abhay and Kiran tell Neelam that her family bahu have to go to jail. Kiran tells that Lakshmi is inauspicious and is not opening her mouth. She says worst thing shall happen with her. Neelam says she shall be punished and tells that Malishka will be found. She tells that once she is in PS, she will open her mouth.

Ayush is coming home and thinks why did he feel bad for Rishi’s scoldings and got drunk. He thinks thank god that guy is safe and is thankful to Lakshmi for coming there. Shalu calls Ayush and asks if he is fine. Ayush tells that he is fine. Shalu asks if he is in office. Ayush says no. Shalu informs him about Police arresting Lakshmi for Malishka’s kidnapping. She tells that Kiran has accused Lakshmi. Ayush is shocked. Inspector asks lady constable to take her. Neelam humiliates and insults Lakshmi badly, asking her to tell where is Malishka? Lakshmi says she didn’t do anything.

Neelam says you have lost the chance and asks Inspector to arrest Lakshmi. Ayush comes there and stops the Inspector. He asks Lakshmi if she is fine. Lakshmi also asks him. Ayush asks Inspector on what basis he is arresting Lakshmi. Inspector shows the earrings and tells that she had come here in the night to kidnap Malishka. Ayush tells that Lakshmi was with him in the night, as he had an accident and had panicked. He tells that Lakshmi had come to help him and take the guy to the hospital. He says that guy is discharged and went home. Abhay says what a story and asks him not to lie. Kiran tells Inspector that Ayush also supports Lakshmi and lies, tells that Lakshmi is not divorcing Rishi and kidnapped Malishka to solve her troubles. Ayush requests her not to interfere and tells that he supports Lakshmi, as she is truthful. He asks Inspector to go and check in the hospital. Inspector says they will. Ayush asks him to free Lakshmi.

Malishka thinks she will make sure, Lakshmi is more insulted than she was in the hotel incident. She says even her Lakshmi Bhagya can’t save her. Lakshmi tells that the earrings are here, and don’t know how it came here. Ayush tells that when Lakshmi was with him, then how she can come here. Inspector frees Lakshmi and gives her time to prove her innocence, and tells that if Malishka gives statement against Lakshmi then nobody can stop her. Kiran provokes Neelam against Ayush and says one day he will become your enemy. Neelam tells that Karishma will make him understand and tells that Lakshmi has kidnapped malishka. Kiran instigates Neelam against Lakshmi and tells that if lakshmi kills Malishka.

Ayush tells lakshmi why did she bear all this for him. Lakshmi says I did for your goodness, for your pain, guilt and repentance. She tells that she had seen his worry, he was worried about everyone. Ayush gets emotional and hugs her.

Reviewed Rating for Bhagya Lakshmi 18th November 2022 Written Update Malishka plans self kidnapping: This rating is solely based on the opinion of the writer. You may post your own take on the show in the comment section below.