Dev and Payal’s marriage gets underway with Saath Pheras and sindoor ritual next. Dev’s sister-in law Gulkand (Bhabhi), wife of his brother Ayodha marks her entry at the wedding. She was supposed to not attend the wedding as was sent away and even Dev’s dad Bhuvaneshwar informed Payal’s parents earlier on not inviting Gulkand as she is arrogant. Nevertheless, Gulkand on marriage day scares Payal by throwing a snake replica on her during the sindoor ritual. Dev throws away the dummy snake straightaway and supports Payal who is in shock. Gulkand comes there after learning of Dev’s marriage, and she was not told about his marriage and Dev’s parents tried to keep her away. But somehow she manages to know it and arrives there. Gulkand snake throwing activity is to inform Payal on the upcoming lurking vieled attacks from her in-laws which is even more in magnitude than a snake bite. Payal gets shocked to hear Gulkand’s strong words.

A Happy surprise party is planned  for Vihaan’s mom Neelima but it turns gloomy with Gautam, a middle aged man who had given a deceit to Neelima some 18 years ago comes back again in her life. Vihaan and other family members are in shock to see Gautam who insists to meet Neelima as he wants to speak. He meets Neelima and informs her that their relationship truth should be out in open to all. Vihaan comes to confront Gautam and asks how come he got strength to come there. As Aarushi tries to pacify Vihaan, in the process she falls down from the stairs after mistakenly pushed away by him and gets unconscious. She recovers soon but Gautam gets hold of her and takes her along as hostage in the room. He learns of police has been called, and to find his escape he uses Aarushi as the bait. He runs away before police’s arrival and Aarushi continues to remain in shock after Gautam’s criminal behavior. Vihaan takes care of Aarushi but she takes time to comprehend. Later on, Aarushi learns about Gautam’s actual intentions to ask forgiveness from Neelima and acted in a wrong way to make himself heard. Next, she plans to mediate in Neelima mom and Gautam’s matter.

RV senses Ishani’s presence all around him and even the mail she wrote on behalf of Shikar’s mom makes him think on feeling Ishani even after her death. He continues to remain in haze about Ishani being alive. He comes to Shikar’s home after finding a girl with him. Shikhar informs RV on how his life has changed after entry of the girl who stays with him at his house. He speaks candidly that his life take a big turn and now he acts opposite to what he thinks. RV asks Shikhar whether he is in love, and goes on to suggest he needs to listen to his heart. RV gets vibes on what Shikhar’s feelings and asks him to go and share what he feels to the girl. Shikhar ponders with RV’s suggestions, and he shares some candid moments with Ishani which were unplanned. One such instance is Shikhar falling over Ishani and sharing eyelocks, and both having emptiness on their faces in that situation. Shikhar is on the trail to develop feelings for Ishani. RV continues to be ignorant of Ishani being alive, and her stay in Shikhar’s home. What will be the trigger which will realize RV about about Ishani’s living existence  ?

Prem is worried with Roli’s pain as Sid is believed to be no more. Simar is sad after Roli’s departure but figures out that Roli is concealing a facet of her life and truth. Simar wants to know about Roli and Amar comes to help her. She inches closer to know the secrets behind Roli’s identity truth. It so happens that Roli comes back and stops Simar from entering into a room which holds the key about her life truth. Simar is keen to know Roli’s worry. Sid will come back in a new avatar Aryan who is a lookalike of Sid, and attacks Roli with a sword to harm her. He only listens to her boss Rajveer singh and doesn’t carry much emotions. Simar would be knowing about him. Will Simar find out more about Roli’s truth which she is hiding ?

Chakor acts fearless after getting the label of liar, cheater from kids and Suraj & co. She haven’t done any wrong and wants to prove her truth. The peon framed Chakor in cheating due to his helplessness exploited by Tejaswini. Will Chakor succeed in proving her innocence ?

Naitik gets upset with Naksh dance antics (Nagin dance) on the road, and both are annoyed with each other. Akshara comes to mediate the uneasiness between father-son duo. On another front, there is Gangaur festival, Akshara wears a bridal dress and takes help of Naksh and Naira in making the idol and does Gauri Shankar prayers. She was compeled to sing during prayers and gets cheered up for brief time. But soon she gets sad during the family dance together as she misses her extended family much and it is hard for her to celebrate Gangaur away from family. She gets sad and her emotions pour out during her reluctant dance moves. Naitik comes to uplift her mood by showering romance and gives her support. In the track ahead, Akshara with family going back to Udaipur as things are going to get resolved, and Bhabhi Maa decides to stop putting blame on Akshara for Dada ji’s death. There is also development of Akshara decision to leave the college after getting hate from students but soon she stops her resignation after the students get to know she is Naksh’s mom, and their hate get translated into affection. Also, Sanju plans to visit India with Naksh and her bonding with Naksh gets well. Will her plans come true in practice ? 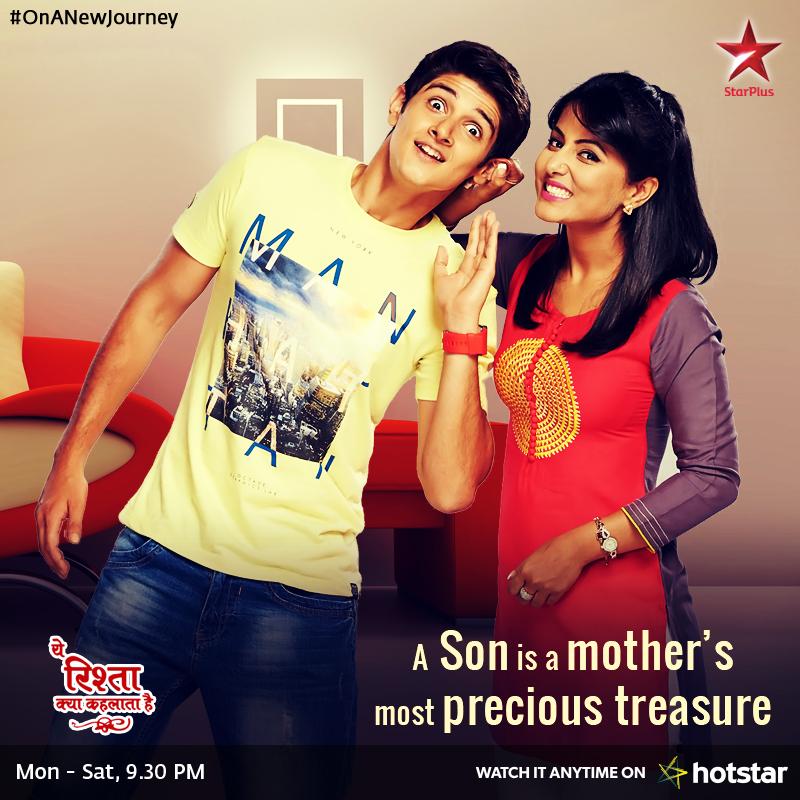 Amaya is in a tiff with her mom Sneha on the pretext she wants to go to Mumbai and doesn’t wish to stay any longer in Banaras. Their tiff got started with talk on adjustments to her dad’s problems. Later, Amaya squeezes to run from home but it so happens that she ends up in police station and she didn’t thought on landing there. Sneha comes to know of Amaya’s presence at police station and comes there to help her. Sneha meets her estranged dad there who is the one bailing out Amaya. Sneha initially felt helpless to take her dad’s help but agrees to it. Amaya gets to know of the revelation of her maternal grandpa (Dada) and also gets to know of her maternal extended family living there. Sneha carries mix emotions with her dad shouldering support in need. Nevertheless, Amaya returns home with family while getting accompanied by her grandpa. Amaya’s grandpa doesn’t value her dad and calls him as scamster. Sneha also speaks strongly with her dad who speaks very bad about Rishi, and gives promise to her dad that his respect will remain intact. Next, Amaya prepares to break the ice between her mom and grandpa by realizing their reconciliation after 32 years of seperation. Amaya is going to have a change in her stance by deciding to make her & family’s name in Benaras.

Ruhi got a small leg injury and reminsces Ishi Maa and understands how she used to get instant care fom her, the seperation pain hurts her badly. She calls Ishita on phone but couldn’t speak since she is confused on how to speak about her condition. Nevertheless, Ishita understands Ruhi wanted to say a lot of things. Raman meets Shagun after she called him and comes to know of Ruhi not going to school and confronts Shagun. Shagun defends herself of wanting to see Ruhi taking leaps in Ad career. He gets distraught while Ishita starts to prepare class notes for Ruhi after she gets to know of Ruhi not going to school. Ishita is going to get help in the custody case with a new entry on the show in order to win Ruhi back from Shagun.

Samrat is showing his monstrous nature infront of Urmi and doesn’t listen to Ishaan. He has already scared Shaurya by revealing the truth of his cancer and tortures Urmi by exploits her helplessness. Samrat wants to take revenge from Urmi and  it is playing in his evil mind. Urmi under compulsion agrees to be follow his instructions and dances while carrying helplessness. Samrat wants to humiliate Ishaan by insulting Urmi with his unjust demands and torture. Urmi doesn’t inform Ishaan on how she heeded to Samrat’s demands and compromised for Shaurya.

Shaad cooks up stories about Jannat as and when needed while Jannat/Sanam couldn’t figure out well about her past with Aahil though she sees some rushes. In doing so, Shaad himself gets entangled in his stories and then needs efforts to justify them. Meanwhile, Misbah wants to harm & end Shaad’s life, and moreover doesn’t wish to see him with Jannat. Actor Karanvir Bohra is back on the show as Aahil which is good news for fans, and new Sanam carries her own plans and wants Aahil to forget Sanam and tries to harm him as well. Will new Sanam succeeds in seperating the lovers – Aahil & Sanam with her evil efforts ?

Sid dons the role of an investigator to solve the mystery of Roshni’s sister who has gone missing after getting abducted by Baweja. Sid teams up with Roshni and DD to find leads in the case by merging clues and comes to travel agency office. Sid follows Baweja’s lawyer as well, and also does his duty of Ghar Jamai well by giving emotional support to DD in her tough time. Roshni at her end also does well to know about Samaira.

Sandhya was hoping to meet Vansh after 6 years for the first time but she gets a setback after receiving a court notice sent by her brother Ankur. Sandhya feels betrayed by her own brother who makes it clear in the court notice that she can’t meet Vansh. Both Sandhya and Sooraj is going through a big shock (Jhatka) and never thought Ankur will do such a thing. They have the legal course of option with them to combat the court notice. Will Sandhya be able to meet Vansh ?